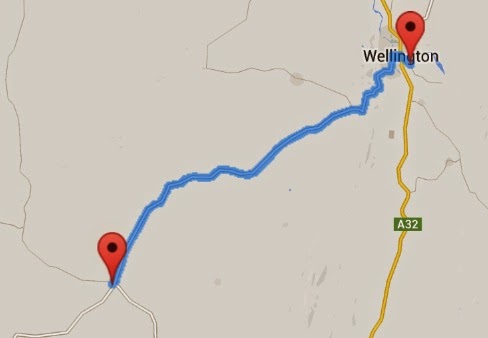 A short day today and on a road we haven't cycled on before and after today a road we are not likely to do again!
First last night, a backpacker turned up just as it was getting dark and the Geelong vs. Collingwood game was about to begin, no worries they were relatively quiet.  I think I mentioned that Neil bought the AFL App to watch the games live ... well we missed last weeks one as we rocked up late in the day (damn daylight savings!) and last night we missed the first quarter as the down loading was no quick enough, we missed the start of the 2nd quarter but managed to see the remaining game ... I was not impressed with the App,  I understand the freezing is the download etc and being on mobile internet it is not exactly the fastest but being out here I thought it would be okay but quite a few times we kept getting an error message and it would just go blank ... not sure why but Neil found a way around it ... believe it or not this error message happened just as Tommy Hawkins was kicking that goal at the end of the game! crikey did I let it rip at Telstra lucky for Neil he quickly got it back up so we could see him kick the goal - LOL
All in all it was okay to watch it on the tablet and as the night wore on the internet picked up speed so it was so stop starting. I would have listened to it on the radio but all we could pick up was NRL!!!
So lucky daylight savings has ended which meant that we now get up at 6am and start no later than 8am which works in our favour as before that we would start late and on the longer days rides we were getting in to camp well after 2pm and it was difficult to get the shorts and shirts washed and dried ... many a morning we had to put on damp shorts and shirts!!!
So we head out at around 8am.  The night before Neil had checked out the profile and he showed me that it was a gentle up and then down to Wellington, I didn't say anything as I couldn't quite remember but that profile didn't look like the profile I had looked at.  So we start riding and it is a gentle climb, then there is a down, then another climb and then down and I began to think that Neil had used the profile from the other road and it wasn't until half way along that Neil made the comment that the road doesn't seem to fit the profile and I informed him that he may have used the southern road which in hindsight would have been alot easier than the road we were on.
Despite the ups and down it was still ridable .... just.  The road is in a bad way and we rode most of it in the middle of the lane.  It wasn't until the last 10km that it became unridable.  For 7km you ride through a cutting that is generally down hill for us but at times the road was in a very poor way and since it was winding cars had to wait for us before they could overtake us.  I can't understand why they bother with the road.  Clearly it is a road that is made for cars and they have tacked on (very badly I might add) a side bit for trucks and caravans that are now wider than the existing road) but in doing their tacking on the heavy trucks and caravans have churned up the road and funny enough when you watch them ahead of you you can see them bumping along worse than us!!!
So relieved to be off the road we are here at a rather expensive caravan park, not much here except bbq and gas ring.  Facilities are okay and we are in a nice spot under a tree ... 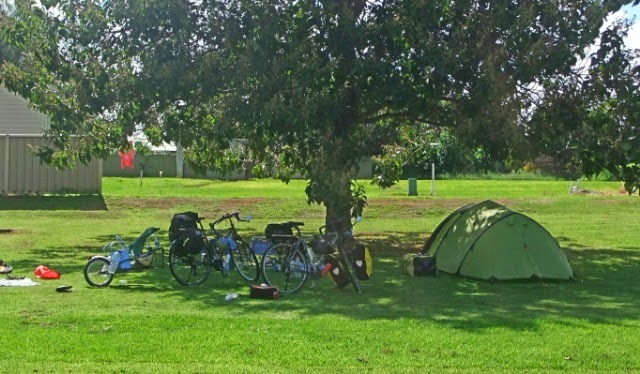 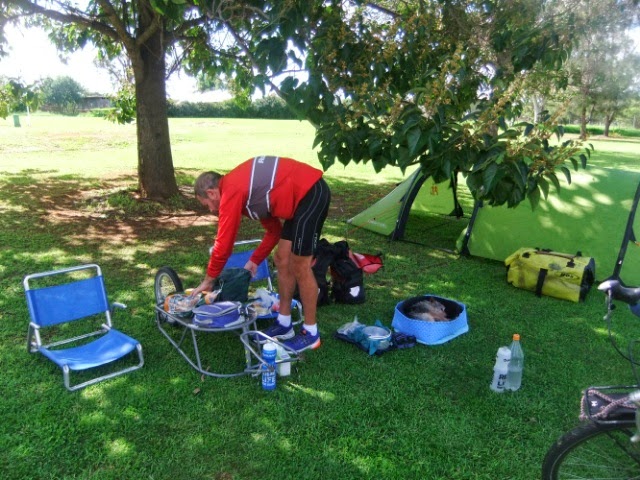 I expect the rather high camping fees is because it is beside the McQuarie river, not alot of people here maybe due to the time of the year. 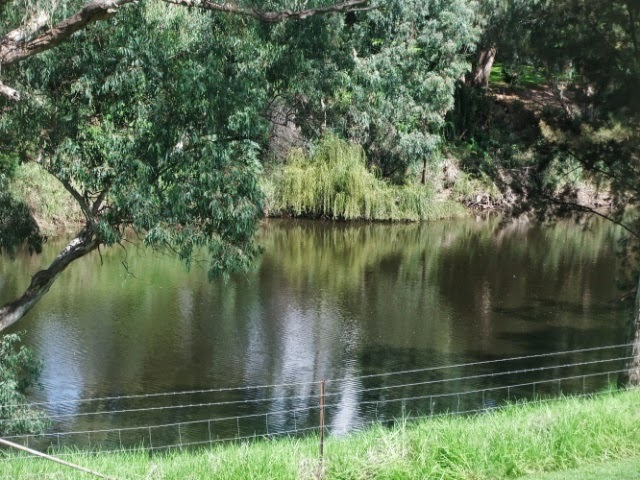 The park owner says there are 6 kayakers arriving here at some point and they are in a cabin ... I haven't seen them yet.
Tomorrow is a bigger day to Gulgong and more than likely another expensive park!