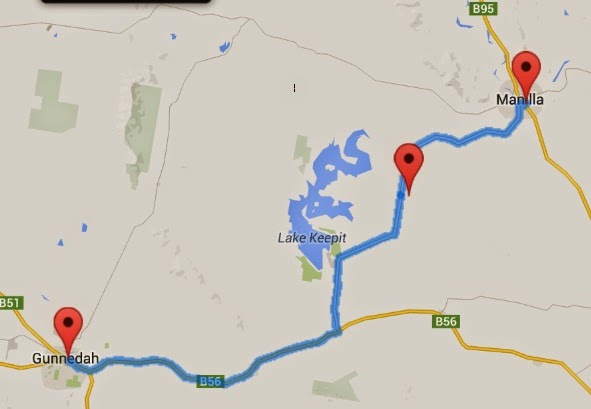 Today was tough, I can't remember if I last posted that Kouta was a wee bit sick on the Saturday we arrived at Gunnedah ... well last night he either suffered from an anxiety attack at 4am in the morning or he managed to become extra flexible and lick some of the flea liquid that we put at just above the base of his tail .... we are thinking the latter!
As for his anxiety attack well the past 2 nights Neil has put his clothing bag between our heads as Kouta loves to sleep up near our heads ... so in the middle of the night you could roll over and and be faced with a face full of Kouta breath or Kouta butt!!! so last night Kouta came up to us at around 4am and was not a happy chappy and since then couldn't sleep anywhere in the tent!
So it was a sleepless night for us and it was a late start as Kouta was not well in the morning ... he really looked like death!  He had his tail between his legs and head really low to the point he would sit in his basket, lean forward and then momentarily nod off to sleep and slowly his head would get lower and lower ... you know when you watch any of the following people fall asleep in the their chair ... Mum, Dad, Ray, Flo etc and even me at the odd time well he looked like that.  At one time while I was packing up my sleeping bag and mat he fell asleep leaning against the tent wall ... consider that our tent walls are soft!
So we headed off along the Oxley highway for 30km and Neil and I were both at our wits end by the time we got to the 30km point. We had the usual headwind and a strong one at that and it was a very busy highway and to make matters worse we didn't really have a shoulder to ride in.  Most of the time it was narrow or half missing and after Carroll there was no shoulder at all!  We have noticed that since we last cycled here 4 years ago (in NSW in general) that the traffic is far more courteous.  In the past they would overtake us on the other side of the road regardless if it was on a blind corner or crest but now they tend to slow right down if they can't pass us and wait until the opposite direction is clear.
Once we turned off at the Lake Keepit turnoff the traffic went to virtually 0! It is lovely riding along this back road even though it is a bit up and down but it is okay.  We have a sensational view of where we are going ... Manilla is at the very right of this mountain range ...

here is Neil amongst the backroad traffic ... 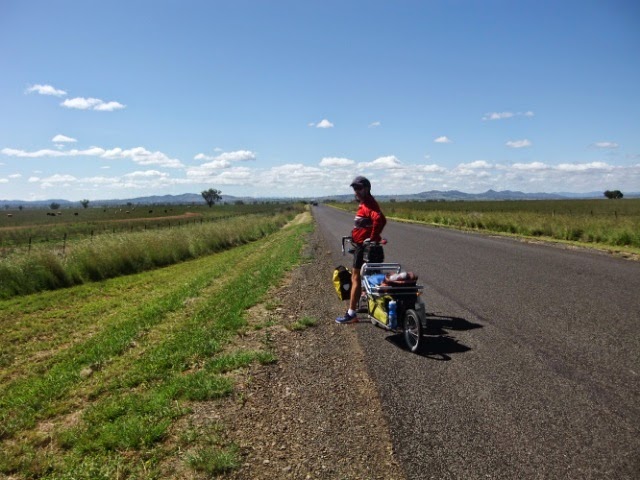 Since we had a late start and the first 30km took us for ever to complete we had to have a quick bread break about 13km out from Manilla ... 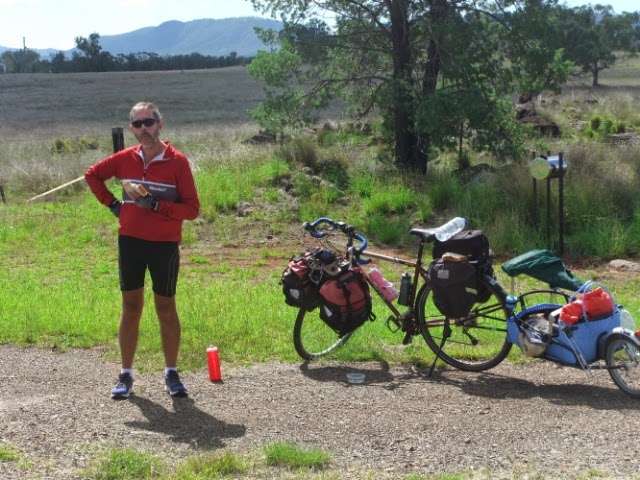 just before getting to this point I had had enough of the pesky little flies ... especially when you have to go up small hills they get sucked into your mouth, fly in you eyes and up your nose ... ah they have been with us since the start and today was just hot and sweaty so they were everywhere and I had had enough! 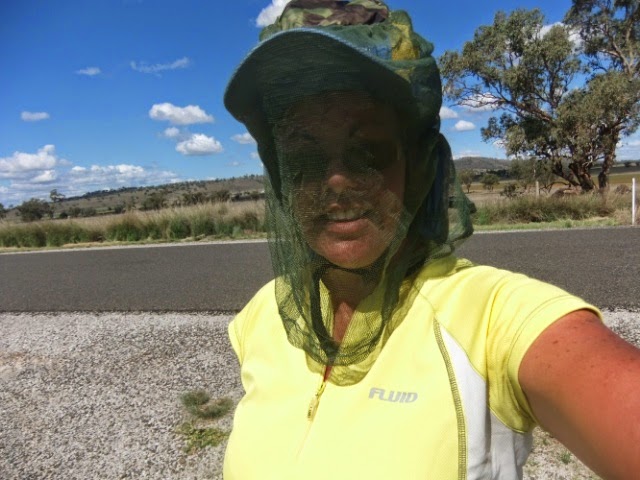 good look isn't it? but at least it does the job!
Very relieved to get to Manilla just on 2pm, the campground is down on the river and the lady remembered Neil from last time, she remembers most cyclists as her husband is a cyclist (we passed him as we got to the town edge).  The camp kitchen has be revamped and is tidier and absolutely fantastic.  It has everything with one exception - the freezer part of the fridge is draws and at the moment they are frozen up and over so we can't freeze my ice pack.  Otherwise it has a full oven, gas cook top, microwave, toaster, jug, cutlery, plates etc.
There are quite a few tents here - the guys next to us are hangliders we think and they all seem to know each other so there must be some hanglider club somewhere.  We did pass just after the turn off a glider plane club and saw one being towed in the sky and released.  It is quite quiet once the tow plane disappears!
We are here tomorrow ... killing time because of Easter so we coincide with the 2 shop days that are open over easter!