What a huge mistake to think there would be no traffic on Anzac Day!  It was a nice morning to start a little later and have a 2nd cup of coffee so we did.
Completing the rest of the hill and just going along looking at all the apple farms and there are heaps of fruit places with cafes and rest stops to take advantage of the passing traffic on the New England Highway.  We had a lane to ourselves and it was good.  The traffic was there but didn't worry us, most were just cars.  At the top of the summit we were at just over 900m. 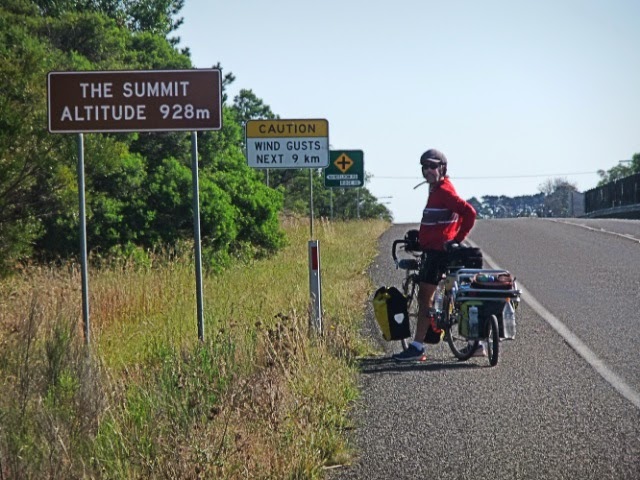 The apple season has finished so all the fruit places have them for sale unfortunately they are all in big packs so I couldn't pick up any.  We did pass this farm which we thought initially was a strawberry farm (hydroponic) but we realised that it might be growing parsley and herbs. 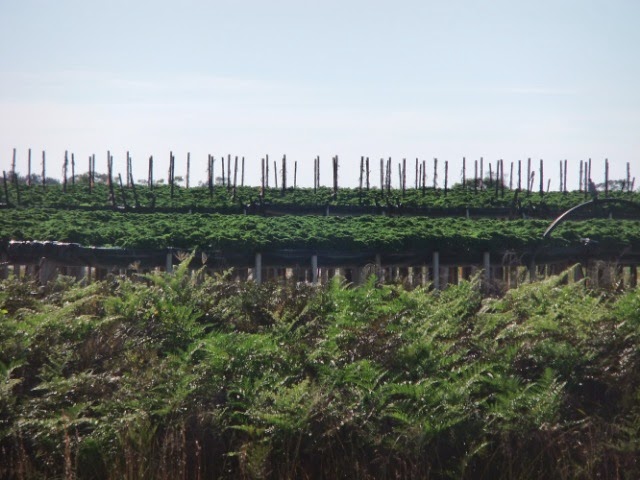 so thinking this is just fantastic in our own little lane beside this main highway ... life couldn't get better.
We stopped for a break at a small place called Dalveen I think and there was a group of backpackers in tents and vans camped there.
So after about 20km our perfect world diminished completely ... our shoulder disappeared, the traffic was horrendous.  For some strange reason we thought everyone would leave Thursday night ... no they have all decided to leave on Friday morning so every man and his ute loaded up with gear decided to leave.
When there was no shoulder to ride in we had to ride out in the road and unfortunately there wasn't enough room for us and cars so they had a tendancy to squeeze through and we had quite a few close calls.  I have always said that Queenslanders are the worse drivers in Australia they have no regard for safety or road rules!
Fortunately the main bulk of the ride is down hill but he last 20km was rolling and the shoulder just disappeared completely ... I think I aged 20 years today.  We got to the outskirts of Warwick just before 1pm and I tell you I was at my witts end, I was so frazzled and relieved to get to Warwick.  We found a town map and found Dave and Aggie live on the outskirts of the norther part of town.  We took note of the streets and when to turn left and right.  We crossed the Condomine river and then had to turn onto Weewondilla road and took one look at the road and thought crikey look how steep it is.  We decided to ride on the footpath and it was a munter of a sooty grunter that I was going about 4km an hour and when that happens the front of the bike twists and turns and you end up getting the wobbles and at one point I nearly took out a sign post and then when I looked up I saw a rubbish bin plonked right in the middle of the path and new that I could navigate the bike around it safely so I decided to get of the bike and walk!
Dave and Aggies' house is a few streets on just past the golf course.  The 2 boys (James and Bradley) have grown so much and James is actually taller than Aggie!  Happy to see them and we will leave here on Monday morning.