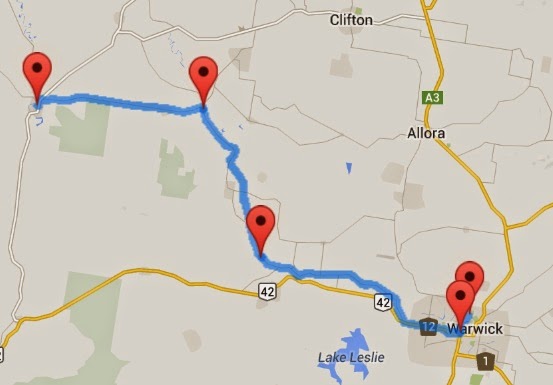 Hi di hi campers, we are back after visiting Dave and Aggie and the kids at Warwick.  It was good to sit out the long weekend and we decided not to brave the traffic yesterday that would be returning home after a long weekend.  Instead we left this morning where it wasn't so busy on the roads.
We started with a very fine misty drizzle down into town and out for about 5km along the Cunningham highway and then it seemed to clear although south off us the clouds were definitely threatening to absolutely pour down, but since we are heading north west the clouds weren't going in that direction so we knew we weren't going to get much rain and we were right by the time we got to our turn off along Sandy Creek Road (9km west of Warwick) we had fine clear weather.
It has been such a loooooooooooooooong time since we have basically had the roads to ourselves ... we guessed way back at Coolamon where the back roads were quiet ... since then all major and minor roads are full of traffic through NSW!
If you look at the profile it looks a bit up and down but it wasn't as bad as the profile looks ... it was more rolling and believe it or not we had a strong tailwind that helped us up the inclines!!!  Neil pipes up behind me that it is nice to have this tailwind!  We don't think we have had a tailwind this strong at all this trip and if we did it was only for part of the ride, but today it was very easy riding.
We were sort of following the Condomine river so there was alot of farm land and floodways.  We saw some interesting houses ALL on metal poles due to the flooding that can happen in this area ... below is a photo of what sort of view we had during todays ride ... 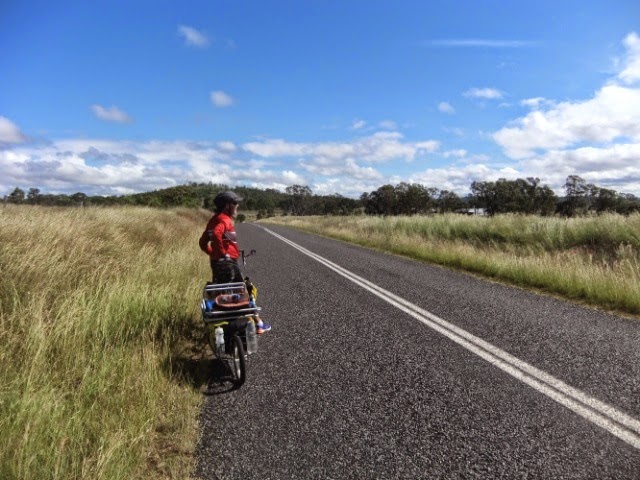 I think Kouta was happy to be back on the road, he liked being in a house and sleeping with us in room and even on the bed but unfortunately Jimmy and Bradley are not dog likers and were a bit afraid of him at first but warmed up to him but still wouldn't pat him and we all know that next to food patting is Koutas'favourite past time!  Dave and Aggie loved Kouta and couldn't believe how quiet he is! 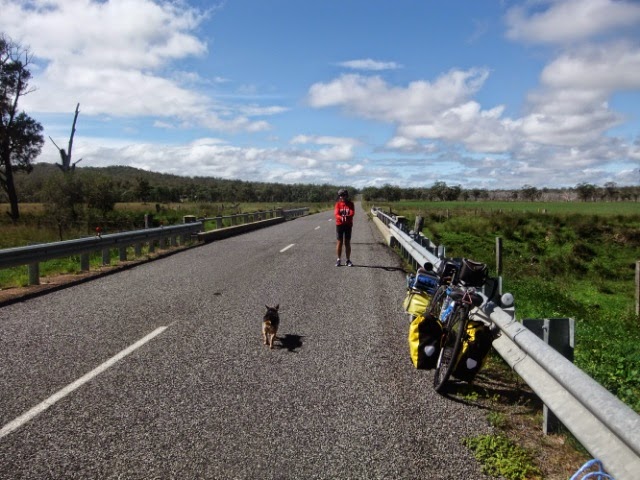 We get to Leyburn just after lunch and there is only one other caravan (now there is a few more).  This place doesn't have power but does have a toilet and water.  It is beside a creek and has these gum trees that are full of corellas ... the birds make the tree look like it has white flowers on it! 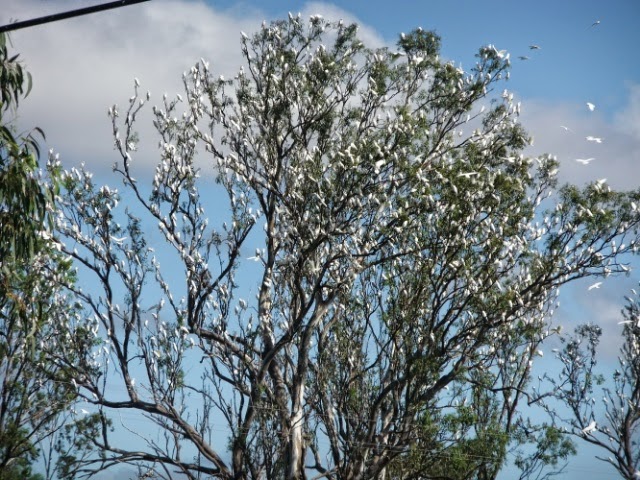 if you look closely at the tree all the corellas are in pairs ... 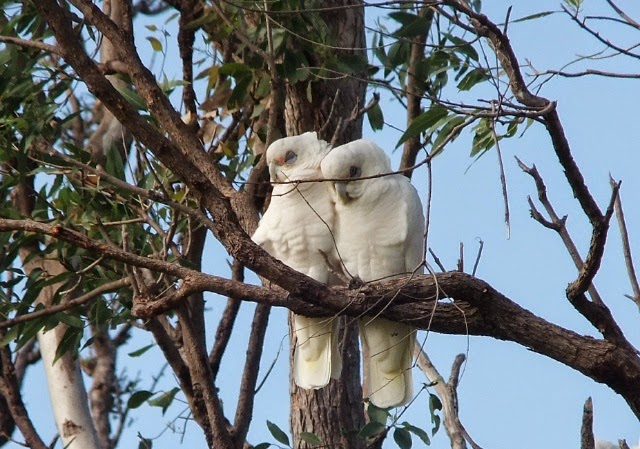 These birds collectively are incredibly noisy and every now and then they will collectively leave the trees and swoop to another group of trees ... there must be at least a 1,000 of them and we wonder how they don't bang into each other when they move about!   we decided to pitch our tent near the one and only table ... 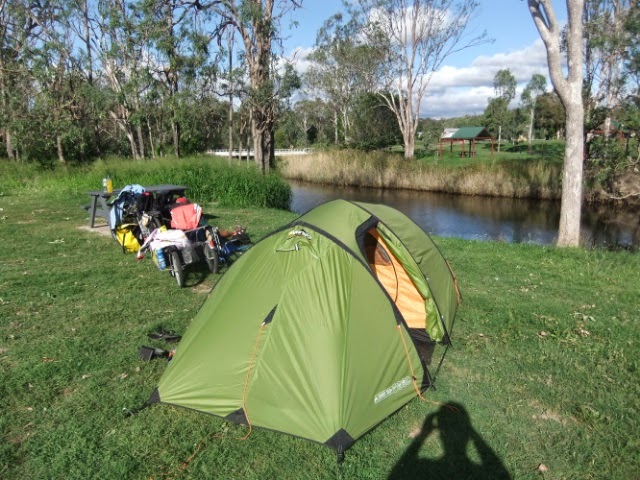 we also decided to splash out and pay $2 each for a hot shower that is across the creek behind the shop ... now Queensland hygiene standards can be a bit lapsed at times and I think this shower has slipped under the radar! 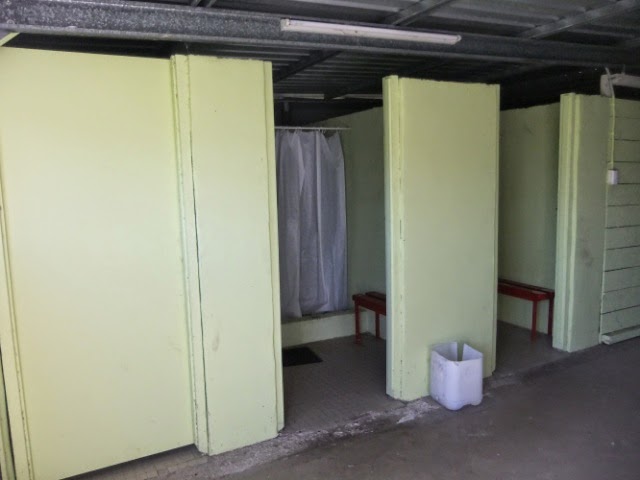 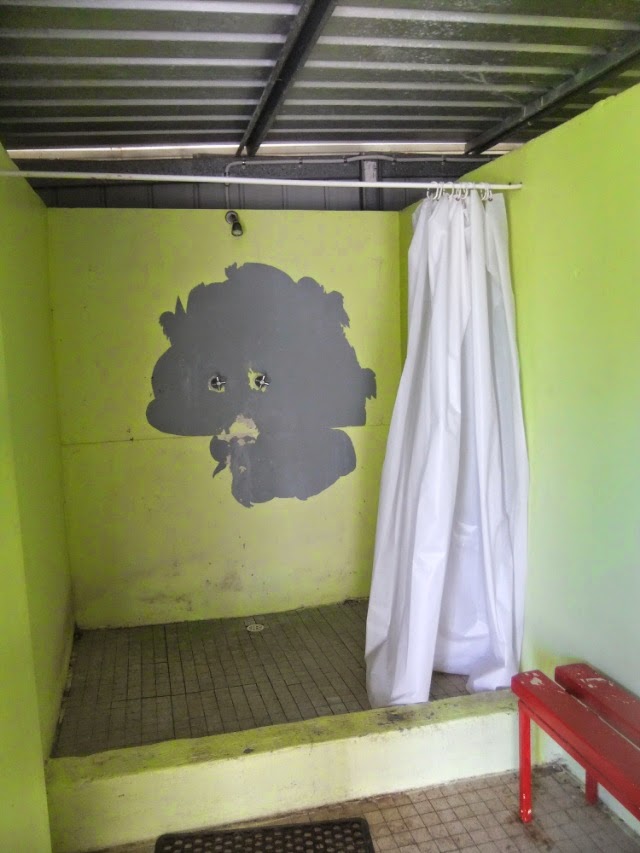 They weren't dirty just a little worn, but the shower was lovely and hot and it was nice to get rid of the grit and sweat off us.  Tomorrow we head for Cecil Plains.  We have stayed there before.
I forgot to mention we weighed ourselves at Dave and Aggies and Neil has lost 3.5kg and I have lost about 2.5kg, although I kept forgetting to weigh myself and when I did remember I had eaten and was full of good food!!!