OMG we are lucky to still be alive after today!  It was a very tough and hard day (Neils words not just mine!) and for Neil to say it was a hard day ... it was a hard day!
We got up early and were off by 7.15am.  I knew it was going to be a tough day as it was windy all night and still blowing early this morning.  The only good thing about that is that the tent was packed up dry.
The wind is blowing from the East and our road is heading in an easterly direction all day!  Looking at the profile it was up for the first 25km.  The traffic was heavy but that was only for the first 7km as they all turned off for the correctional facility .... it must have been change of shift.
It was slow going as the hills were out in the open and although an easy grade to ride the strong headwind just made any easy hill into a very hard hill ... it was like this to the top at 25km which took us 2 and a half hours!  On our way up we were entertained by 2 massive wedge tail eagles that were struggling in the wind to get away from some pesky birds that were hassling them!

Once at the top of this climb we knew that there was no real downhill (there never is!) and there was only a short hill down for 4km before you start climbing the next hill.  If you look at the profile it is up and down all the way to Gulgong.  Going along the next 10km to the 35km mark we had a van load of little ole ladies pull us over so they could have a look at Kouta in the back trailer ... everybody loves him.  Riding along the last 10km down to Goolma is probably our only real free wheeling for the day and even then the wind made us pedal going down the hills!  We stopped for a cuppa at Goolma, then we headed off and came across 2 bike friday tourers.  We stopped for a chat and they were from Vancouver, Canada.  They had come over especially for a bike friday gathering at Mudgee and were on there way to another one at Cowra.  Nice couple, retired and enjoying life, well they would be as they were travelling from Gulgong to Wellington and had a raging tail wind!
So onward we go and by now we had 30km to go and it was beginning to get tiresome riding up these easy gradients and having to do it in some of our lowest gears simply because of the wind,  I was hoping it would have eased up a bit but it hadn't.  So we carry on and by now the traffic from Dubbo has joined us and it is getting really busy, the road has become very broken up and we have to ride in the middle of the lane and are forced over when cars and trucks overtake us ... which is regularly.  My upper body especially the shoulders are beginning to get weary (even more than my legs!) and this is from the constant battle to keep the bike out of the bad parts of the road, swerving to avoid rough parts and pot holes and also the wind blows me into the bad parts of the road as I am going so slow!
It is a real relief to see the turn off for Gulgong and the sign saying 7km but they are the looooooooooooooooooongest 7km I have ever done and off course it is into the wind and slightly going up and the road is shit so that 7km takes us nearly 40mins to do!  I took a photo of the last of the ranges that we came through ... so if you look at the ranges and then imagine we had to do that for 60km!!! 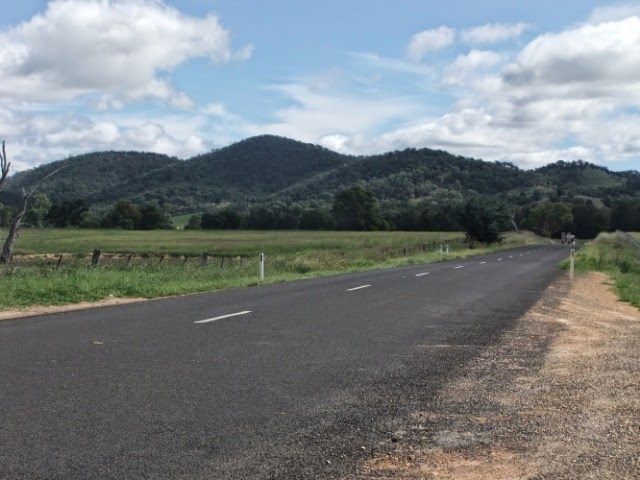 Happy to get to the campground after nearly 6 hours on the bike pedalling alone and 7 and a half hours since we left Wellington.  The first thing we do is take Kouta out and he pees and then comes back jumps in his basket and goes to sleep .... 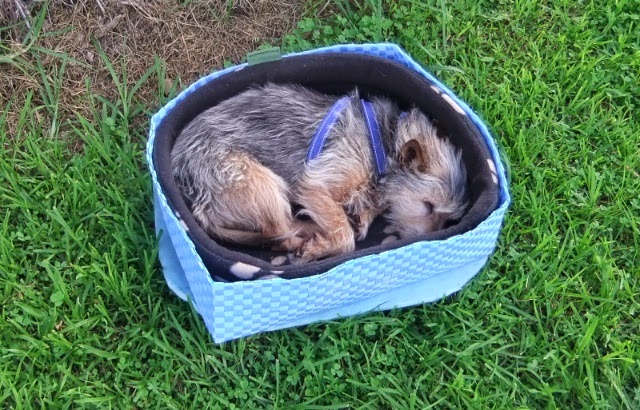 Now look at this face, if this isn't the face of a weary man ... then I don't know what is! 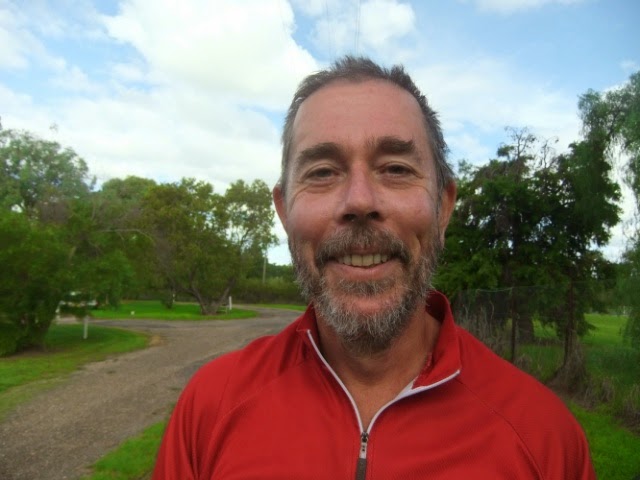 and here is a tired and happy couple! We stayed here 4 years ago and it was a nice campground now it is a little bit of a dump and has been let go quite a bit.  We look forward to riding to Dunedoo tomorrow and even though it is a short day we hope the legs will be able to make it!
We shall sleep well tonight I think!
Posted by Janet O'Brien at 6:33 PM