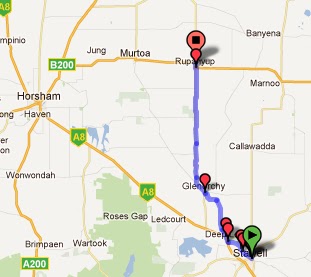 Man it was a tough day today! but first we had a thunder and lightening show very early this morning.  Now this sent Kouta into 'panic mode' which means that he paces about the tent panting away, he does this regardless of the time of night and last night it was around 1.45am.  I didn't hear him at first and wasn't aware until the first crack of thunder at 2.15am which woke me up and I tell you it was loud thunder, bright lightening and brief heavy rain which once the storm moved over became just light rain.  We woke this morning and it was still raining a bit so looked at the radar and saw that it was about to clear but unfortunately the radio was saying something else and that there was going to be more thunder and lightening by lunch time and at least 20-50mm of rainfall, but according to the radar there was nothing in sight.  So we ummmed and ahhhed and decided that we should be able to get to Rupanyup around lunchtime and fingers crossed that the weather forecast timing is out!
So we left around 8.30am and took a quiet back road to Deep Lead of which the last 1/2km was on the highway from there we took the old Glenorchy road to Glenorchy.  The 2 quiet roads were superb for riding hardly anyone on it.  The area is a bit like what is around Bendigo - scrubby and barren.  No grass just trees and heaps of digging holes and mounds from all the gold digging I presume.  There was very little wind and the temperature was almost muggy.  The riding was very pleasant indeed.
Once we got to Glenorchy we took the slightly busy road that goes to Warracknabeal.  It was busy going the opposite direction to us - lots of trucks.  At this point the wind picked up alot and it was a very strong headwind.  I became a little stressed as this meant at least an extra hour on this leg of the journey which meant that we would get to Rupanyup no earlier than 1pm and if the forecast was right then we were in deep, deep poop!
This road is very long - 34km and very straight and most of it is wheat fields so there was very little protection from the strong winds which by now had dropped me down to around 11 - 12km per hour! 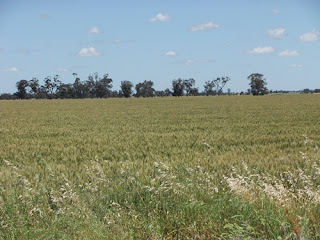 The wheat fields look nice as you ride along - better than hay as it doesn't set my hayfever off! We had lunch on the side of the road and felt a little better once we got going again.  Got to Rupanyup around 12.30 and the town is a little bigger than what I thought. 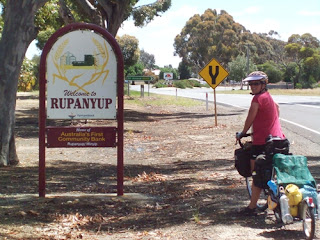 There are quite a few houses which I presume support the heaps of wheat farmers that are around this area, it has a pub, takeaway, small general store, post office (which Neil thinks is up for sale), a Bendigo bank and a garage/farm machinery place.  But there are quite a few empty shops along the main street.
The town doesn't have an official camp ground more a lovely park area set aside for travellers with toilets, power points and a shower in the disabled toilets - a bit like a place we stayed at Tullibigeal in NSW last year which offered travellers an area (free of charge) in the hope that they spend a little money in the shop so that it stays open for the locals.  Well here it is not free but costs $10 which is okay as there are plenty of power points and a free bbq.
Here is our tent spot ... 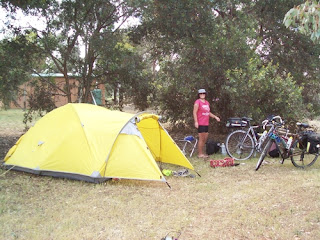 it is nestled in amongst the trees for shade as it is around 31 degrees at the moment and the wind is really blowing - I would say around 30km per hour.  We would had taken up one of the power points but it was out in the open and on lillydale topping so we opted for the shade and I am using a power point in the shade near the water tank!
Now Rupanyup is famous for 2 things - the first is that it boasts to be the first town to have a community bank - hence the Bendigo bank and believe it or not, and before I tell you I was in absolute shock when Neil told me this and explained the sign and I have lived nearly my entire life an absolute lie!  Do you remember the famous TV series 'the flying doctors' at Coopers Crossing in Broken Hill NSW? well believe it or not we passed a sign that said "Coopers Crossing - the home of the flying doctors" now I just thought oh yeah they have a flying doctors service but Neil pointed out that this town is too close to a hospital to warrant a flying doctors service so he said it meant the TV series.  I thought no that is up in Broken Hill not in Victoria - Neil points out that  it would be cheaper to do the series somewhere like here as it is close to big towns and Melbourne - I tell you I was gutted when I found this out - I really thought it was filmed in Broken Hill and I have often said to Neil that I would love to go there as I had seen it on the TV!  Tomorrow I think we pass where they filmed it so hopefully I can recognise some of the places or get photos.  So really my life of imagining and thinking Broken Hill looks fab and so 'outbacky' has been one big lie!
Oh the clouds are coming over now so we might just get that rain and storm later on!
Tomorrow is Horsham.
PS - I forgot to mention since it was so hot this afternoon - afternoon tea was a 2L tub of vanilla icecream which we couldn't finish ... very depressed over not being able to finish it!
Posted by Janet O'Brien at 4:14 PM