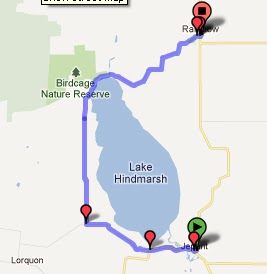 We found out that the road around Lake Hindmarsh was sealed and so we decided to back track about 6km and take the road to Lorquon and then turn off in a north direction a further 10km later.  This road that we came along was a single lane but either side of the road was graded and heavily packed for the wheat truck traffic.  But funny enough at the turn off there was a sign saying no trucks which we thought was odd as there is nothing but wheat fields around here and they carry the wheat to the silos in all the small towns!
Technically this road doesn't run alongside the lake and you barely see it until at the top part of the lake and even then you only see it if you look hard through the trees.
Along this road we saw 2 strange animals - in fact something that we normally don't come across in the fields 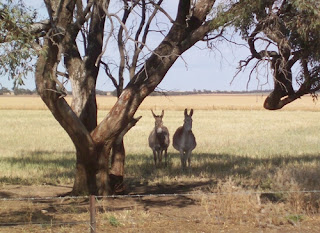 these 2 little donkeys were with 2 horses which is very strange here as you tend to see only sheep, sometimes with llamas or alpacas (which ever one it is that babysits the sheep from foxes) and occassionally cattle.
I actually saw my first snake - a baby one about 35cm long.  Neil didn't see it as he was on the other side and I only saw it once it wriggled off the road and onto the hard clay alongside the road.  It was wiggling fast so obviously it didn't like the big objects (us) coming.  Not sure what type of snake but it had a whitish belly and a browny black back - maybe a brown snake or copper snake - need to carry a snake book with us.
We came to Outlet Creek which apparently hasn't had water in it since 1905 as this is a creek that runs from Lake Hindmarsh to Lake Albacutya which is empty and probably be never full again. 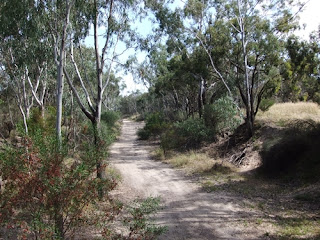 since the creek hasn't had water in it I think the locals use it as a road now!
From here we had our coffee break at something called 'the wattles' and from here the dirt track took us to the actual lake. 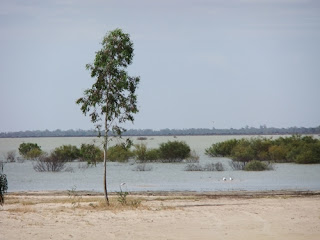 so this photo was take from the northern end of Lake Hindmarsh.  I would imagine this is a popular place on the weekends with boaties and the like.
Just up the road from here we came across more wild life - 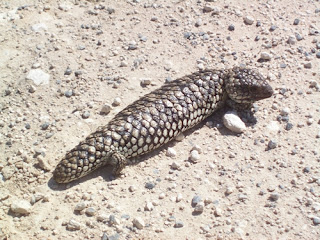 Neil can't quite remember the name of this type of lizard and it wasn't fond of us stopping near it to take photos!  After the lake the road goes in an easterly direction to Rainbow.  The thing about cycling around this area is that it is flat and you can generally see the place you are going to kms and kms away simply because of all the tall Silos - generally where they are there is a town. 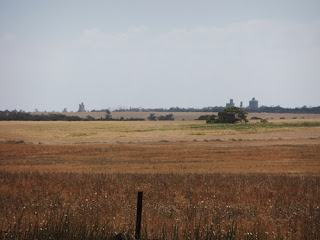 Some of the farms around here have already started to harvest their crop and even on the road today there were a few wheat trucks.
Fortunately for us the bulk of our riding is done in the morning when it is cool and today it is in the early 30's and tomorrow it is tipped to get to around 36 degrees.  So we got to Rainbow around lunchtime. 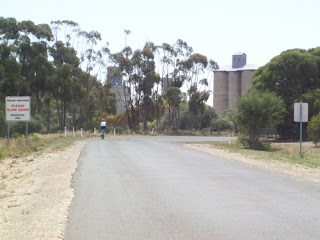 here is me and you can see the Silos in the background.  Rainbow is a slightly bigger town than Jeparit and has a small IGA (and expensive!) a baker, a butcher and a few other small shops.  The Caravan Park is nice, exactly like Jeparit but has a few more people here and a resident caretaker.  Doesn't have a kitchen but it does have a bbq.
The town is on the Grampians water supply so no bore water like Jeparit and Nhill so it is nice to get a lather in you hair when you have a shower!
Here is our camp spot - we don't have our small compass with us so we can only guess where east and west is and this photo is taken after we moved the tent to more shade! 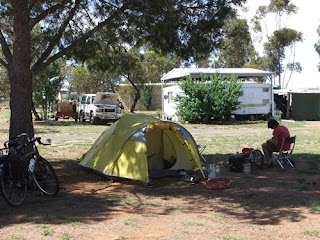 We might set the alarm to 5am tomorrow and get an early start due to the hotter weather, they are also forecasting storms but we have found that it is 'potluck' when it comes to these storms as some towns get them and some don't!
Posted by Janet O'Brien at 4:40 PM