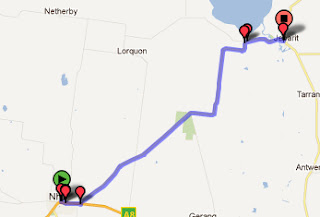 Well here we are in Jeparit the birthplace of Sir Robert Menzies an ex prime minister of Australia during 1939-1941 and 1949-1966.  but before I get on to todays riding below are a few photos from Nhill.
Right next to the campground in Nhill there was a boardwalk around the 'swamp' - probably not an ideal name for a tourist item.  Neil said 'Swamp' should be replaced with 'inland aquatic habitat' and I say 'swamp' should be replaced with something like 'pond'  they tend to have a more positive feel to it rather than 'swamp' LOL. 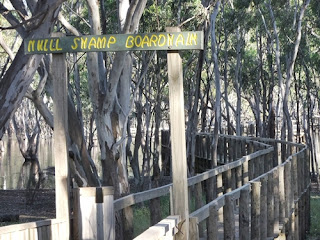 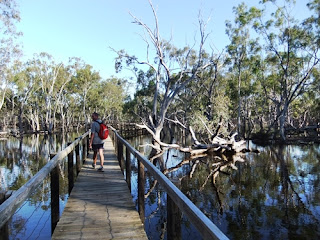 It is a nice walk - didn't see many birds even though there was alot of bird hides maybe the screechy corellas drove all the birds away!
So we left this morning around 8.30 and stopped of at the post office and when we tried to get back on the road we were stopped by a councilor from Hindmarsh council who wanted to chat to us and was interested in what and where we were going.  A few minutes later another councilor joined in with the chat.  Very much behind Nhill and trying to increase the population - one said that they now are trying to concentrate on getting people into Nhill rather than trying to retain the younger ones who want to leave.  Mind you houses are very cheap up here - could pick up a really good house for less than $140,000 - just got to get through the extremely hot summers! ... I can do that!
Anyway we set off with a slightly overcast day and a gentle breeze blowing from a south easterly direction so a tailwind for the bulk of the ride until we turn eastwards and then it becomes a cross wind for us.  But for once it is not blowing a gale like it has nearly every day since leaving Ararat!
Upon going North we noticed a definite difference in the surrounds - A LOT drier north of Nhill - heaps more wheat fields which will be harvested in about 2 weeks. 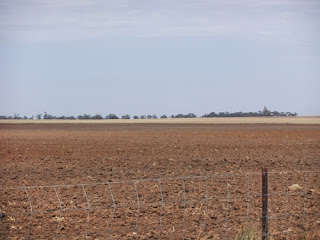 above is a photo of a field that has been plowed not sure what was in it originally but next to it is a wheat field that looks ready to harvest!
The road is quiet with local traffic only and the road is in good condition.  It is relatively flat so the going was good for us.  It is just a short day only 45km and we arrived here in Jeparit around 11.30. 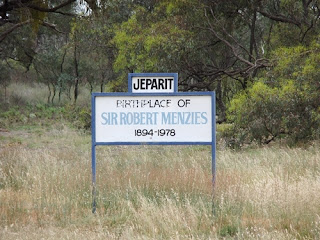 Jeparit is a very small, almost deserted town on the Wimmera river ... which we crossed just before getting into town. 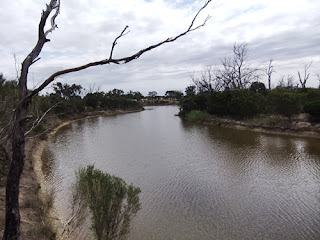 this river starts in the Grampians, goes through Horsham and ends here in Hindmarsh lake which is full of water and tomorrow we are hoping to cycle around it to get to Rainbow - we just need to find out if the road is sealed!
Most shops in town are closed or are up for sale.  The campground has 3 other vans which we think are railway workers which are working on the tracks getting them ready for the wheat harvesting season.  But the town is very proud of the fact that Sir Robert Menzies was born here and have devoted memorials to him around town - 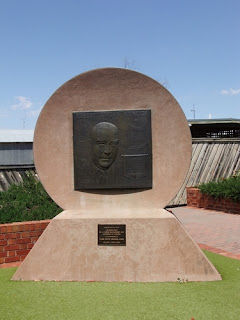 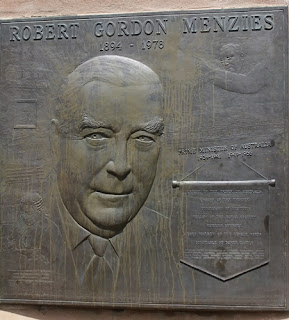 One thing this town does have is an abundunce of churches - a signpost on one of the streets has 4 signs of 4 different churches in that one street!
The campground is okay - very basic but clean and tidy.  It costs $16 for a powered site and $11 for unpowered site - here is our site. 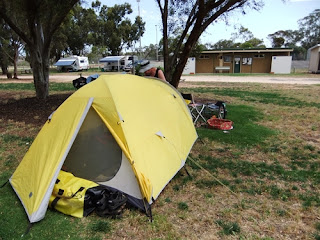 Tomorrow we are off to Rainbow either via the local road (32km) or via the lake (51km).  I think the further we go north the drier it is going to be!
Posted by Janet O'Brien at 3:46 PM