Crikey what another tough day - lucky the days aren't long!  We turned west today and towards Horsham and can you believe it the wind also turned with us and was a strong head wind again!
But last night the forecasted lunchtime storms of thunder, lightening and rain came around 4.30 and lasted until about 9pm.  The first hour was all thunder and lightening and a little rain but not much but watching the radar areas around us like Stawell and Horsham got far more rain than us so we were lucky in that respect.  After the first hour the thunder and lightening was relatively sporadic and it only rained of and on and even then not really heavy but enough to turn the surrounding red clay and red lilydale topping into gunk that stuck to the bottom of the jandals!
Woke this morning to a westerly wind and plenty of sunshine and no rain on the radar.  Headed off around 8.30 am and took it nice an easy.  I knew we would have this head wind and it is not use fighting it so I just turned off and grinded away.  But I couldn't turn off and go into 'la-la land' like I have known to as the road was the Wimmera highway and although not exceptionally busy - enough to keep you awake and alert!
We took our first quick stop at Murtoa.  Just coming into town on the east side is where they store all their grain and you can see a few under the big blue tarps and I suppose they are getting ready for the season.  There is also a huge corrugated grain shed and I wondered as we rode past if that was the one with the famous 'sticks' not saying anything to Neil except asking if that is also where they store the grain and he said yes.  Got into town and looking at the information board (love reading those in small towns - you can gain a real feel for a town when you read those!) and it mentions the 'stick shed' which is the one we just rode past.  Kicking ourselves for not getting a photo of it from the road as it is apparently closed to the public as it is very unsafe but I do remember seeing a snippet on some program once and it looks like a fab place inside.  I hope they preserve it and make it safe so people can see inside.  Apparently inside the building is supported by a vast array of timber poles - hence the name 'stick shed' but these poles are now deteriorating and so unsafe to view.
Murtoa is a nice small town of 1000 people and I think we may stop here on our way back - not sure it depends on which road we take after Horsham again.  But the name Murtoa is aboriginal for land of lizards - hence this statue of a lizard ... 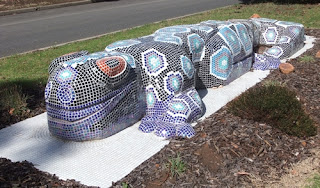 and below is a photo of me resting at Murtoa and Kouta facing away from me ... sulking I think as he keeps getting growled at for biting his feet! 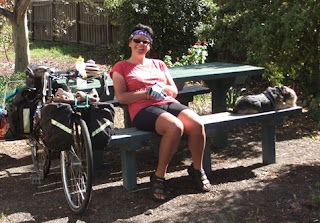 From here it is 30km to Horsham which is a long slog with the winds but we get there in the end.  Mind you the last 10km was on the Henty highway and that was running south west so our head wind became a strong cross head wind that blew us all over the place.  Unfortunately there was very little shoulder for us to ride in but the traffic was incredibly good to us and gave us plenty of room.
Horsham seems a huge town with wide roads and plenty of empty parking about the place.  We opted to go for the Horsham Caravan Park instead of the one on the highway near Wimmera lakes as it was closer to the shops and also quieter.
It is a small park and very full with caravans.  Initially we were going to get a powered site but when we got here the office was closed and we were informed to pick a site and come back to pay later.  So we looked around and not liking the powered sites we went to look at the camp kitchen which is fabulous so we opted for the unpowered and are using the kitchen power point!  Now we are usually the only ones camping in a tent in caravan parks so we love it when we have our own area and this one is big, has heaps of tables and a wonderful kitchen so we are like 2 pigs rolling in mud!  you could say this is the perfect park!  in fact the toilets and showers are nice, water is really hot, the laundry is great heaps of basins for hand washing and the icing on the cake ... the laundry provides laundry powder!  I tell you we are wallowing in mud now!  the only down fall and it is a minor one and that is the toilets, laundry and camp kitchen are all have security doors so we have to remember 3 seperate key pad numbers!  We have written them down but I am sure by tomorrow we would have memorised them normally they are quite easy to remember ... almost idiot proof really!
So below is our prime camping site ... 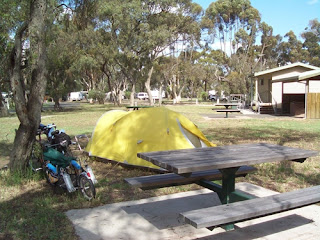 The small building to the left is the camp kitchen and just alongside it is the bbq which doesn't look crash hot - best to use the one in the kitchen.
Tomorrow we are having a rest day here - Aldi is just down the road!  woo hoooooo did I mention we are like pigs wallowing in mud!!!
Ray and Flo hoping to skype you tomorrow - we sent you a text yesterday from Rupanyup but got no reply so we assumed you haven't got your mobile phone on.  So if you are reading this turn you mobile on and I will get Neil to text you or ring you.
Posted by Janet O'Brien at 4:53 PM