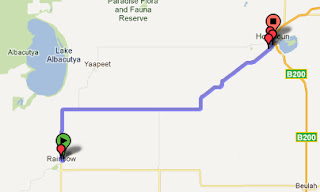 Crikey it was and is hot today - it is 2.49pm and it is already hit todays high of 38 degrees!  We set the alarm for 5am wake up this morning so that we could do the bulk of the ride before lunch and it becomes to hot.
It was very dark at 5am and had to use the solar light to start of at brekky.  Nice to watch the sunrise colours though.  And we were off at 5 minutes to 7 this morning - most people where just getting up as we were leaving and very few traffic on the road.
The wind also got up at the same time as us and was a headwind or cross wind for most of the ride today.  We had an early cuppa since we left early and it was already starting to warm up at 9.30am.  Just before reaching our morning tea spot we let out a coupla hooplas and whoop whoops to each other as at exactly 32km into todays ride we officially crossed the "15,000km cycled since we left work" mark. Woo hoo! 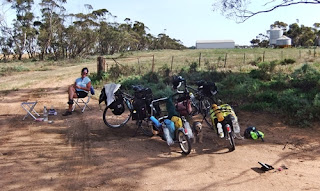 We didn't see any wildlife today although we were spooked quite a few times by sticks which we thought were snakes alongside the road - I tell you they really look like snakes up until you figure out that it is a damn stick!  In fact there was something that looked incredibly like a snake half curled up and we both moved to the other side of the road and watched it as we rode past and realised it was just some sort of black tyre tubing that looked remarkably like a snake!  But thanks to "Pawzed" who left comments on last nights blog about the lizard - it is a stumpy tailed lizard or shingle back - I remember now that last year we saw one in NSW alongside the road but when we saw this one the name just escaped us.  And also thankyou for letting us know that donkeys are used to babysit sheep!
You know Neil and I discuss farming alot while riding along and since we both have zero knowledge and guess most of the time we have done pretty well for ourselves - we guess crops correctly and how they are grown and harvested but what stumps us now is Canola.  They have been cut and are currently drying out in the fields - what stumps us is how does it not blow away in the wind.  Now the wind is not a gentle breeze it can be incredibly gusty at times and around 50-70km per hour so how does the canola (which is light) not blow away?
Anyway after seeing numerous wheat fields over the past week I finally got to see some harvesting going on.  Very excited I was when I saw the machines out in the paddock and rather relieved that they were on the right side of us as the dust was carried away from us ... had they been on the left of us we would be covered in wheat crap/dust as we rode!  Below is one of the 2 that was working this field. 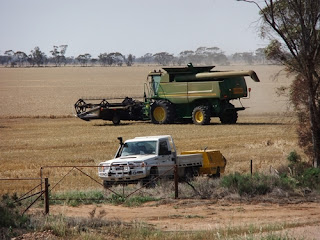 in the photo below if you look behind it you can see the crap blowing out from behind and you can see that it blows away - imagine that alongside the road and you had to cycle through that! LOL 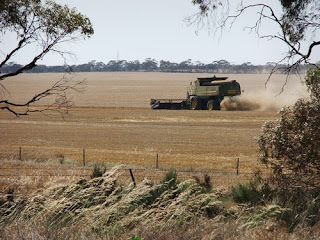 We got to Hopetoun around 11am which is great as the sun started to really burn now and the wind while cooling on us as we cycled was beginning to get warm.
It is a town about the size of Rainbow and Neil went in later on to get food and took some happy snaps of the place.
This is 'downtown' Hopetoun and you can see congestion and over population is a problem here:)

a charming memorial hall - looks like the one in Rainbow, Jeparit, Nhill, Goroke, etc ... they are beginning to all look the same! 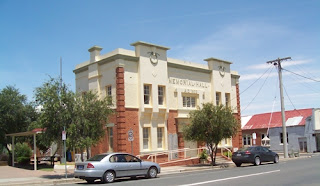 The campground is nice, lots of shade but we have to keep moving the tent to keep it in the shade - we are under a big pine tree but now it is in sun so we move it - difficult to know where the exact line of the sun will go and can be the difference of the tent in sun or shade! 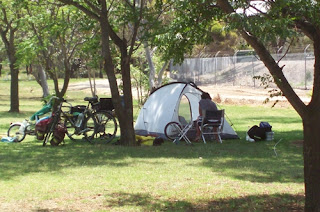 speaking of heat - why does Kouta always insist on being in the tent even when it is cooler outside? 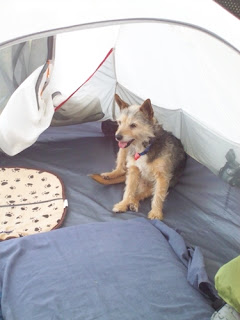 when this photo was take it was cooler outside the tent and about 5 degrees more in the tent!
Not sure what we are doing tomorrow, forecasted thunderstorms this afternoon and have now changed to maybe rain, maybe showers!  But they are saying rain tomorrow so we may stay here if it is gloomy.  Neil seems to like this place, maybe we will go house hunting here:) LOL
Until then we are hanging out for the cool change which is meant to be here early evening.
Posted by Janet O'Brien at 3:08 PM