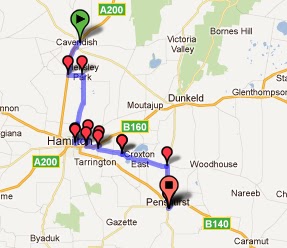 It was a cool morning when we started and we took the Henty highway for the first 7km and turned left onto Hensley Park road.  This road is a quiet local road but this morning was quite busy we thought!  This road also has Hamilton Airport on it about 10km from Hamilton.  We did stop for a break just outside the airport hoping a small plane would land as we could see that there were people and 'av' gas trucks out near the runway.  But no plane turned up while we were there.
The road from the turnoff to the airport is relatively flat with a little bit of rolling.  After the airport it is more undulating but okay.
We picked up supplies for the next 3 days at Hamilton and took the Glenelg highway out eastwards to the edge of town and then took the turnoff  to Chatsworth.  This is a quiet road which we have been on before.  It is a lovely road with a view of the Grampians on your left for most of the way.  Last time we were here (feb/march 2009 I think) the area around us was very dry and the lakes had no water in them.  This time the land is very green and lush and the Lakes had water and heaps of birdlife in them.  By now you should have guessed that I love the Grampians so here is a few more photos for you!
Just cruising along and liked this view:) 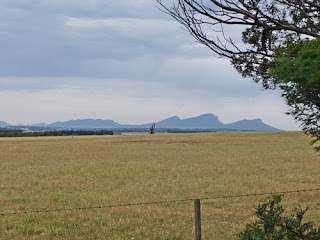 We did have a break on the small lake next to Lake Linlithgow and this bushland reserve would make the perfect bush camping - a bit out in the open but the road is quiet so no one to disturb you.  But the view of the Grampians and Mt Abrupt is absolute superb! 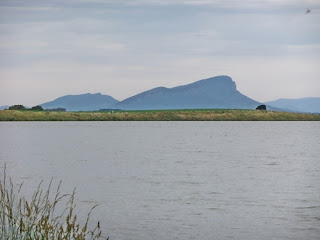 From here it is about 5km to our turnoff and then another 10km south to Penshurst.  As you turn right towards Penshurst you get a view of Mt Rouse.
The campground is nice - basic with a free washing machine so although we got here a little later than expected we still did our washing and are hoping it will dry.
The weather today was suppose to be 31 degrees but it was cold in Hamilton at 10.30am and only really started warming up around midday but I don't think we will be getting to 31.  We hardly had any wind again today - I think it is suppose to blow a northerly to get that 31 but they are forecasting that tomorrow so fingers crossed it blows from the north as we are heading straight south to Killarney on the coast.
Here is our camp spot at Penshurst - 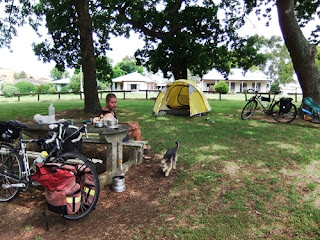 We are under acorn and pine trees.
Posted by Janet O'Brien at 3:18 PM