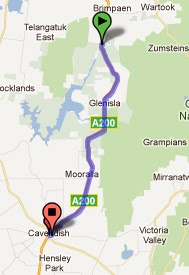 It is alot cooler at night now and we are sleeping like logs - even Kouta sleeps the whole night through - he only moves when he feels that he should get more of the sleeping mat!
We woke this morning and it was cloudy and a very very light drizzle passing through but we could see blue sky further on so we really had no other choice but to go rain or shine!
On the highway again and just out of Cherrypool we are close to the Grampians on our right and Black Rock state park is also close to us.  It is lovely riding along this highway! 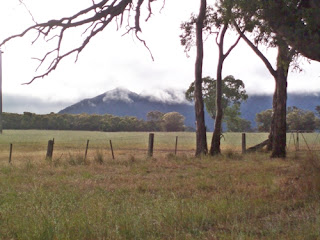 As you can see from the photo above the bulk of the Grampians was shrouded in clouds and it wasn't until mid morning that we could begin to see them.
However on our right the low mountains weren't covered in clouds and I think this is Mt Byron. 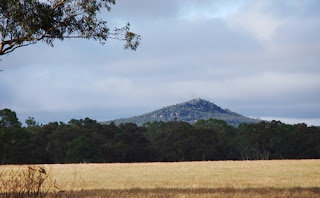 So the ride along the Henty highway certainly changes from open pastures to fields with alot of gum trees in them.  Again we saw alot of wildlife - heaps of wallabies and we managed to see 4 emus - man they are so funny when they see us and run.  They don't run in an elegant way more of a fast plod using their ungainly long legs and because their bodies are so big that they tend to bounce along and look like they are going to topple over and off course they don't run in a straight line but swerve in and out of imaginery obstacles!
Our first stop was around 20km from Cherrypool and here we could see the Grampians. 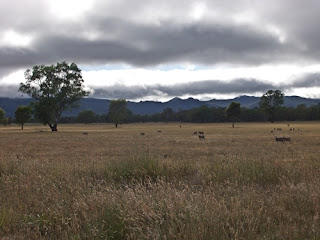 and this is the road we were on - 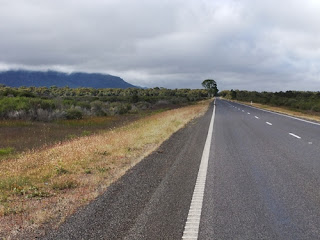 It was a good highway when it is in the Horsham Rural City shire but once it crosses into the South Grampians Shire ... well lets just say the South Grampians shire is not very rich!  the road deteriorate very quickly.  It must get a fair bit of truck traffic as the damage is on the white line strip on the side of the road.  We did notice that there were more trucks this morning compared to Saturday.
We had a coffee break with a good view of the Grampians 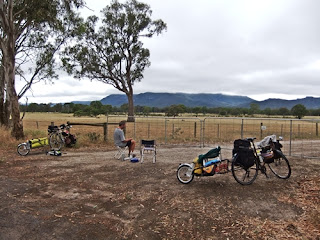 the clouds are lifting! 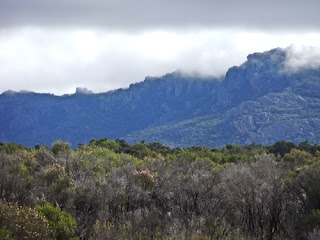 Just after this point (at 36km) the road undulates for around 5km and the road also is ripped up in places - not sure why just in this particular section the road is broken up but there were long stretches of road that have humungous holes!
Although todays ride was not flat it was neither hilly more rolling with an undulating section.  So it was nice riding and believe it or not we hardly had any wind!
We arrived at Cavendish at midday and the camping reserve is alongside the footy field.  It is nice and just down the hill is the Wannon river. 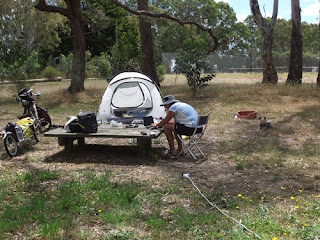 It costs $6 per person for powered and $5 per person for unpowered so we splashed out and opted for powered!  There is one other couple here.  Cavendish doesn't have a store and only a pub and probably gas station.  We sort of guessed there was no shop so we bought extra food with us - tuna mornay tonight!
This afternoon we went for a walk down to the river - 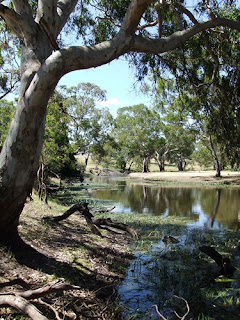 Tomorrow is Penshurst and the weather is meant to become warmer again so maybe fingers crossed we will get a tailwind with a northerly!  We looked and saw that Tuesday is a northerly so we may not have a rest day at Penshurst and take advantage of the northerly and continue through to Killarney!  But Elders change their weather forecasts by the hour so we will see tomorrow evening!
Posted by Janet O'Brien at 4:56 PM