I think I liked Horsham - it is a really noice town - very wealthy as there are parklands and public toilets on every street corner.  I think the council has so much money from all the wealthy wheat farmers that they don't quite know what to do with it all except to build yet another park with fantastic facilities and childrens play grounds!
Below is a photo of the Wimmera river which the campground was right next to. 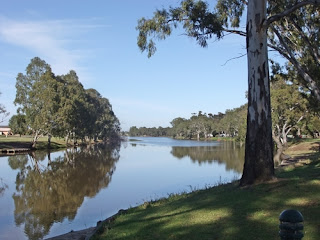 In our camping area there were alot of birds and these very brightly coloured birds grazed on the ground morning and evening. 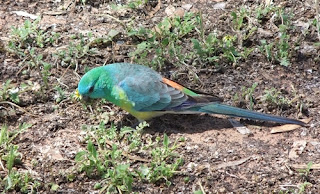 this is a photo of the male and the female is almost the exact colour of the ground and you could hardly see here when you walked on the ground.
We got up early for an early start only to discover possums have either tried to eat my seat or attacked it with their claws as they clambered down the tree the bike was leaning against.  So we had a delayed start and had to wait for the bike shop to open.  Fortunately for me the shop stocked my exact same seat - well almost Serfas Womens E-Gel seat the newer version.  So it only took Neil a few minutes to put that on and we were off at around 9.30am.
The Wimmera highway to Natimuk is flat and the traffic although not busy was very courteous to us.  It is a bright sunny day not a cloud in the sky and the temperature is around 28 degrees so pretty good to cycle in.
We had a coffee at Natimuk which is a sleepy little town.  Near the council buildings is the old court house 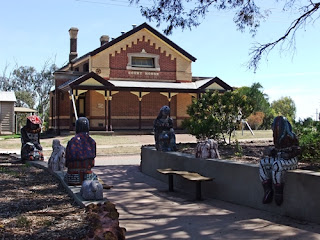 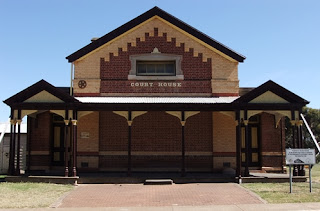 and I presume next to it is the old jail house! 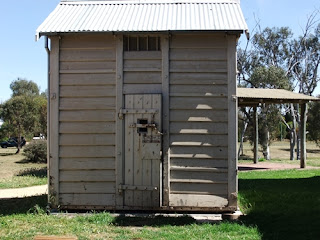 the only shop open in town was the cafe which had loads of cyclists in there - I suppose the ride is good between Horsham and Natimuk (50km return) flat and if you time it right you could have no wind (like us this morning) on the way there and a raging tailwind in the afternoon to go back - yeah that is good training!
From Natimuk we were loaded up with extra water as there is none at the rest area so the bikes are very heavy.  The road we took was incredibly quiet barely any traffic on it.
Our view for the first half was predominantly of the Arapilies (pronounced A-rap-pa-lees) on our left and eventually we could see Mitre rock on the right - sensational views - here is Neil telling me that there is absolutely nothing west and north of Horsham! 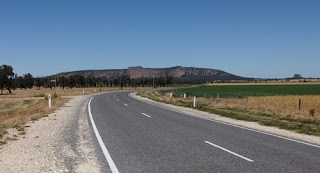 the beautiful Arapilies and to the right you can see a little blip - that is Mitre Rock.  Neil says the Arapilies is popular with rock climbers.  Although the road doesn't go close to the rock with the camera we thought we could see rock climbers but upon taking a photo we realise they are just bits of white rock!!! 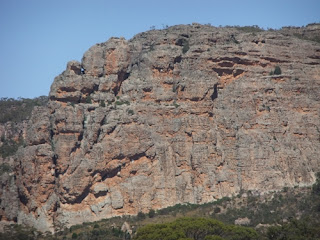 if you look closely you can see bits of white which we thought were the climbers but they weren't! 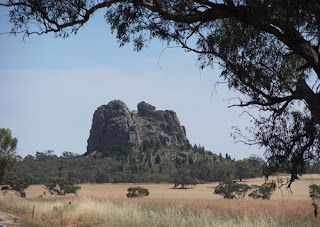 and Mitre Rock.
After the small town of Mitre which is an incredibly dry place and funny enough of all the 6 houses in this small town all had huge airconditioners for summer as it gets hot up here and also at least 2 chimneys as it also gets cold up here in winter!
The cycling is lovely along here if you like the emptiness of the landscape.  I love the endless horizon of wheat fields, scrubby trees and just general nothingness!  Actually there is alot of bushland around more than what we thought it would be.
From Mitre it is about 10km to the Jane Duff rest area 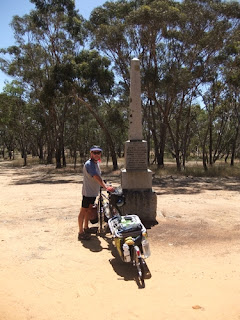 it too is a lovely spot - more like a bushland reserve and it even has its' own billabong.  There is a lovely story to this memorial - in short - in 1864 Jane Duff at about the age of 11 years got lost out in this area with you 2 younger brothers - she managed to keep herself and her brothers alive for 10 days until they were found in the vicinity of where the memorial now stands.  Now if you could see this area and imagine that it would have been very harsh way back in 1864 and to survive this area is a remarkable feat.
While just finishing setting up camp and having a cuppa a goanna trots on up towards the campspot from the billabong then it realises that we are there and promptly turns and finds a tree to seek refuge in! 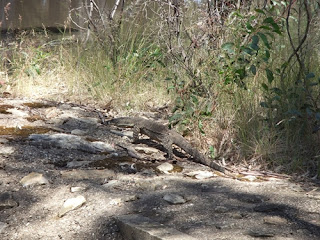 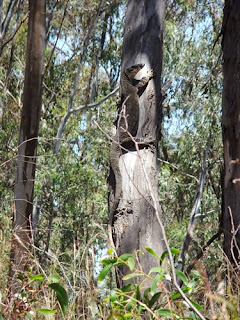 it hangs in the tree thinking of how to get past us and eventually decides that s/he will go down and stay on the other side of the spill way  away from us ... kouta has slept through the whole episode!  It was around 1m long - Neil reckons bigger but I think not! 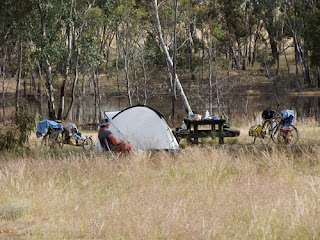 here is our bush camp and it is a lovely spot - so peaceful and quiet and only us (don't think many tourists take this road).  This is what Lake Bolac should have been like - peaceful!
In the afternoon there were 2 women turn up and went yabbie fishing (like fresh water crays) and I think they got a few too!
Posted by Janet O'Brien at 7:34 PM