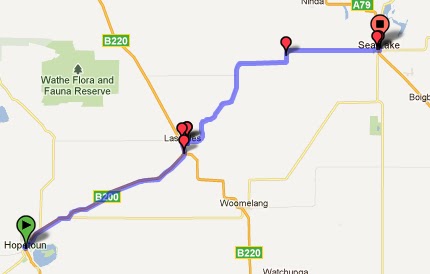 Before I get on to todays ride I thought I would post a few photos of our rest day at Hopetoun.  First is a photo of Lake Lascelles which is a popular spot to swim - this was taken Friday evening - although the skies look threatening we had no rain really but it was still quite warm at this point. 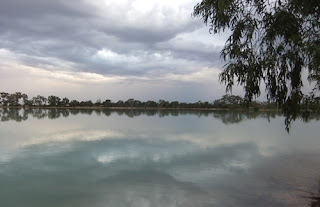 The next day we decided to stay here  as it was a nice spot to camp and the forecast was a bit showery so this is how Neil and Kouta spent their day ... 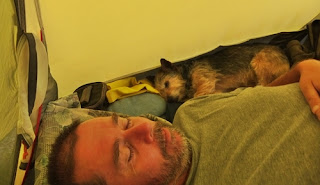 It was fortuatous (spelling) that we spent our rest day here at Hopetoun as Sea Lake is not really a great place for a rest day!
Anyway we had a disrupted nights sleep last night - must be a 'Saturday' thing! first our neighbours decide to have a fight at around 1.30am which woke me up but that didn't last long but then I could here a fair bit of drunken laughter around the lake ... you can all breathe a sigh of relief that I stayed in the tent and didn't go out throwing peoples keys in the bush!  But I don't think it was close to us - I think on the other side of the lake which would have annoyed the people free camping around the lake mind you they were in a huge flash  Winnebago bus which you would hope was sound proof!  You can camp for free around the lake so next time we come through we will do that but definitely not on a weekend!  Then you can pay $1 for a shower at the caravan park we just stayed at.  So after drifting in and out of sleep we go woken up again around 4am when a group walked through the campground and I suppose it being so quiet that when they spoke in their drunken state their voices were very loud!  Again I drifted in and out of sleep and woke up at 5.40am and decided to get up - we were outta here by 7.30am!
We both like Hopetoun and will return sometime.
So the road to Lascelles is the Henty Highway and this Sunday morning it was deserted so it was an easy ride and made even easier with a tailwind blowing from a west south west direction which is good today but the southerlies are set in for the next few days which is not good as after Sea Lake we will be heading south basically - never any luck with the wind!
So Lascelles is about 25km away it consists of an art gallery, pub, post office and possibly a milk bar! Here are a few shots of the town ... 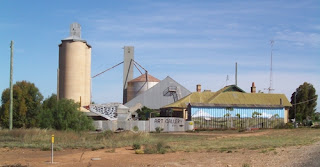 At the rest area there is a campground which is $10 and it is nice, no shade but clean - a good spot today or passing through. 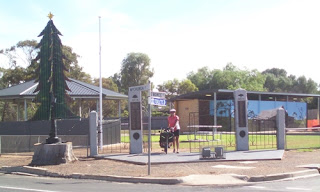 behind the toilets is the campground and when we took the quiet Sea Lake road (which is one lane for most of the way except on the corners where they widened it) this is where we think Mick Malthouse now lives (this ones for you Penny:) ... 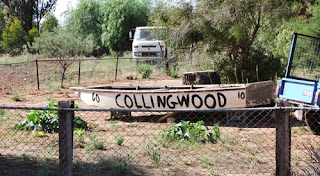 Riding along here we realised that the individual crop fields were alot bigger than what we had seen the days before.  These fields were so massive you sometimes couldn't see the end of a particular field.  Neil managed to jump the fence and pick some of the crop - the first below we discovered is Chickpea 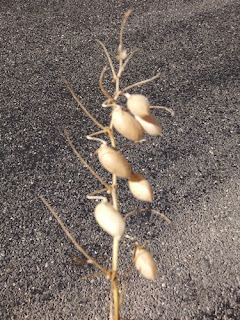 and inside the pod 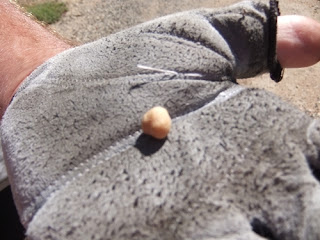 hindsight is a wonderful thing and now we are here at Sea Lake we should have picked more chickpeas and had them for dinner tonight as forgetting that it is Sunday today the Foodworks is closed on a Sunday here so dinner tonight is takeaway!
There is also this grain - which we think is barley 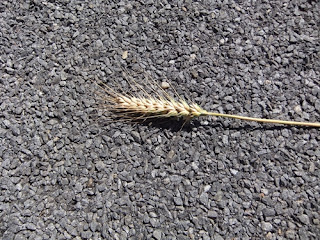 Riding along here there is a bit of machinery in the fields - they aren't working today we presume because it rained here yesterday and last night (as there are big puddles on the road) so it is too wet to harvest.  But I managed to get some photos of some very impressive huge machinery - it is like going through the Mining area up in Queensland with all the 'big' machinery!
Below is a machine that must follow the thrasher and fills up and brings it up to the trucks - the other day the thrasher part filled up the trucks when it was full but in the fields today they are so huge that we assume the thrasher fills up well away from where the truck is and has no other choice but to have the machine below to follow it ... 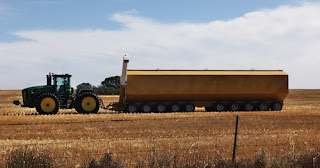 and this is a thrasher which cuts and behind it it has a smaller storage area for the crop ... 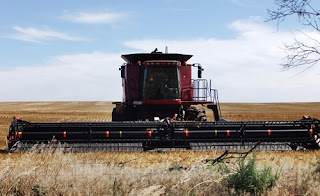 So we arrive at Sea Lake in very good time due to the tail wind which at the moment is very very strong - blowing around 30km per hour with gusts alot stronger!  I said to Neil I think we could have made Swan Hill  by mid afternoon which is a further 70km west!
The caravan park is in the show grounds and is very basic.  More suited to vans as there is very little grass for tents.  The toilets and showers are nice and clean, there is a basic kitchen which is more a room with a table, sink and jug but it does protect me from the wind when doing the blog!  But, to me anyway, I think it is overpriced for where it is and what you get.  It costs $10 per person for power (which suits a single traveller) and $8 per person for unpowered.  So it costs us $16.00 which is quite expensive for around the Wimmera/Mallee area.
Never mind tonights dinner is 'fush 'n' chups' looking forward to that ... so is Kouta!  Tomorrow we are on to Birchip which is straight South from here.
Posted by Janet O'Brien at 2:43 PM