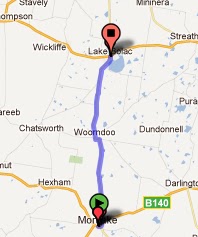 We are at beautiful Lake Bolac ... now we came here in Feb 2010 and the lake was empty (like alot of lakes in Victoria) but now after heavy rain over the past 1 and 1/2 years Lake Bolac is full - mind you it is only about 6-7 feet deep but it is a fishing and water sport mecca.  Today is Saturday and there are cars everywhere but not alot camping.  We are at the foreshore campspot and there are 2 other caravans at the level we are at but down along the lake there are a few camped there with their boats and water sports gear.
We are nestled in amongst the trees and have a lovely shady spot which is just as well as it is a warm day today.
So we left Mortlake this morning after a disrupted nights sleep - the campground at Mortlake while it is lovely and well looked after by the caretakers it is surrounded by lawns and grass and parkland near the lake which means someone in the town loves to mow the lawns and hence both Kouta and I had very bad hayfever yesterday afternoon and night and while I slept okay and only woke up to the sound of poor Kouta scratching away.  Poor Neil got up to put cream on him around 10pm and then up at 3am to get him a tablet as he was still scratching.  After the tablet we slept okay until around 6am and then the hayfever started again!
We left at 8.30 and it was a bright sunny day and the breeze was already up and for the bulk of the days ride it was a headwind.  Although not a hot northerly it was strong enough to make the temperature go up to 30.  It was pleasant cycling despite the head wind as it was relatively flat to Woorndoo and the wind was cooling on the body. 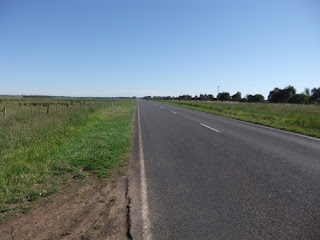 this is the road - to look at the map it is dead straight but it does have a kink or 2.  The traffic wasn't bad the odd trucks but more locals either going to Mortlake or going up to Ararat to do their shopping.
We stopped at Woorndoo which I couldn't remember but Neil could - yes we have cycled this road before but in reverse from Lake Bolac to Mortlake.  The town is tiny but has a superb sports ground which is where we had our cuppa.
It was warm by now and we were guzzling the water.  After Woorndoo the road is more rolling which is okay as on the down hill you could allow blood to flow to your butt rather than the incessant grind on flat with a head wind.
We could now see the Grampians and to me it is a lovely sight and I said to Neil that I think the Grampians is the most spectacular place in Victoria - he didn't agree with me but at the same time he couldn't name is favourite place. 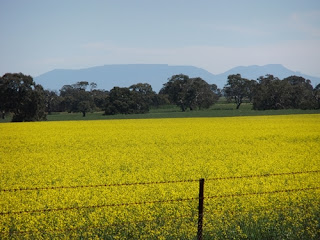 We could smell this canola field for ages but couldn't see it until we passed a long line of thich cypress trees - it is a lovely sight and you can see part of the Grampians in the background. 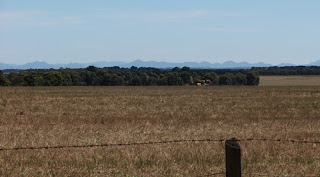 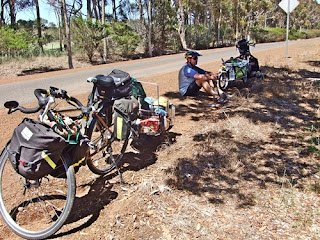 and here we are resting in the shade.
On the ride into Lake Bolac there were no trees to block our view of the Grampians and while cycling along Neil yells out 'can you see the outline of a face in the Grampians?'  Look at the photo below to see if you can pick it out ... think laterally and arty! 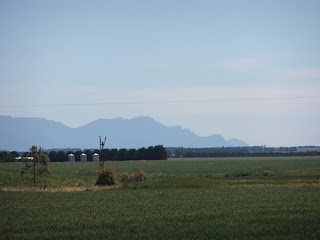 if you can't see it try this explanation - start on the right and work left.  The first small bump is nothing but the 2nd is the chin which then goes to 2 small bumps for the lips and then the nose just above it and then the forehead bump.  Can you see it?  Basically it is a face looking at a 45 degree angle to the sky.  Now we wondered how many other people had noticed the face - probably none since the speed limit is either 80 or 100km per hour and it would be more of a blur!
We got here around 1pm.  The foreshore camping is run by the  foreshore committee and a ranger will collect the fees later on - not sure how much it is to camp.  It is pretty basic - toilets (flush ones) and a damn good shower that is very primitive but hot water - lets just say that while getting dressed you can either get sunburnt or soaking wet if it is raining - there is no roof over the change area only over the shower itself.
Here is our campspot. 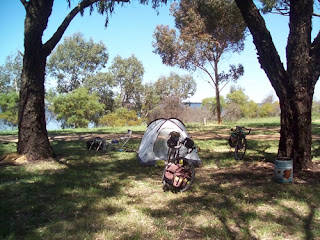 Like I said last time we came here this was a dust bowl and we stayed at the caravan park.  But this time there is grass which is good grass for Kouta and there is a lovely cooling breeze coming through the trees.
Tomorrow is Ararat and I think it is going to be a bit like today headwinds and hot.
Posted by Janet O'Brien at 3:04 PM