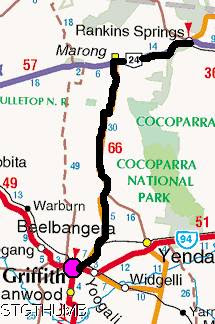 I know I haven't posted for a few days but we got to lake Cargelligo and we couldn't get reception the first day, dial up the second day and now we have a connection that can cope with the up loading of photos so I will begin from where we left off ...
Back in Griffith we met a lovely couple from a town in Victoria called Colac and they came up to Griffith and were staying in a lovely cabin at the same caravan park as us. Here is a photo of them. 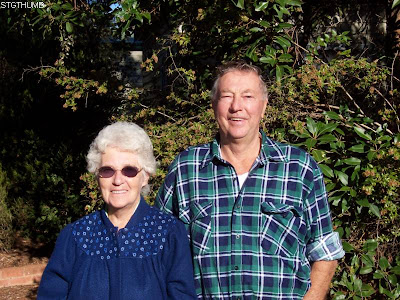 It was lovely with this couple they let Neil drive their car around Griffith and Leeton looking at the sights, they bought our dinner for the 2 nights we were there and even let us hang out in their cabin and they didn't mind little Kouta!!!
So we bid a farewell to Neils parents around 9am and began cycling north towards Rankin Springs. It was a quiet back road with hardly any traffic and it followed the Ural ranges which I think is part of the Cocoparra national park. There were still orange groves and vineyards just north of Griffith. 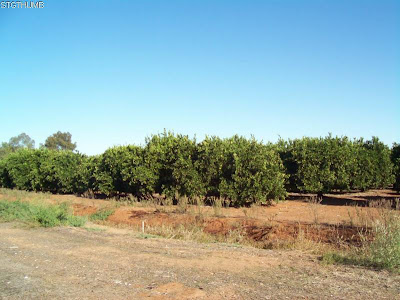 I would say that the orange groves weren't huge like some of the vineyards. Basically this is all we saw for at least the first half of the ride and then once the channels ran out (or the irrigation stopped) you basically entered wheat country. 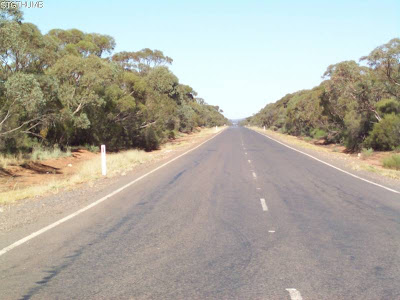 Above is the typical view that we had after the irrigation finished. I like this sort of country I suppose it is because of the colours - blue sky, red dirt and army green trees!
Along the way neil saw quite a few lizards which I kept missing but as per usual there is one form of legless lizard that I always seem to see ... you guessed it a snake ... but listen to this! ... riding along on a quiet road basically like the photo above and I am riding about one meter from the shoulder and Neil is riding in the middle of the road and I always look to my left between me and the verge on the shoulder and ahead and I happen to look at the very front of my wheel and what did I see ... a very thin (about the width of a pencil) 25cm snake to the right of my wheel! As I rode past it I thought I ran over the very end of it but it recoiled and my first reaction and instinct was to gasp and to lift my feet and I began too and then I realised my feet are locked in and can't move so all this is happening in a split second and Neil is a little back from me and says that the snake wriggled away after the wheel of the trailer had gone by.
By now my heart was pumping that these little ones are just as poisonous as the adult ones and then I thought OMG I am a baby snake killer! For the next 5km I had the guilts that I killed a baby snake and then I got angry and thought what kind of mother lets her young on the middle of the road! Neil informs me that once the baby snake is born ... that is it ... it is on its own and has to fend for itself ... and then I really got the guilts, but Neil reassures me that is wriggled away and it was fine! But I tell you I looked ahead (and Neil does too) and you just couldn't see it, it was really camouflaged and we both didn't see it until we were on it!
Neil reckons it was a red belly black snake so it blended well into the road.
So at the end of our quiet road we joined up with the Mid Western Highway and had to go along it for around 15km. Which meant that we had to climb over the ranges. The road meandered through Sims Gap and although the hill wasn't big it was a gentle reminder that we have had absolutely flat country for the past 2-3 weeks!
The photo below is looking east at the top of Sims Gap. 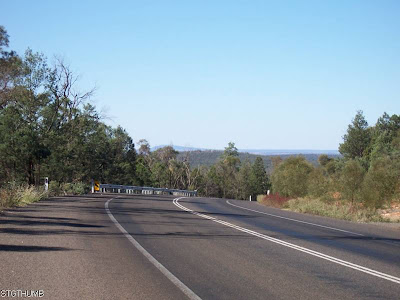 This is facing east at the top of Sims Gap. 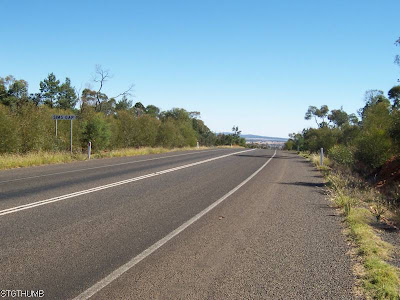 So after that it was a nice roll into Rankin Springs. This is a very small town with a population of around 250 and even then I think they have embellished and increased the population by including all the cats and dogs! We saw 2 people and that was the campground manager and his wife or mother - we couldn't quite figure that one out.
Rankin Springs does have a small walk which includes a few historical facts about the place and we did manage to take a photo of the old water tower that was used for the Steam Engines that would cart the wheat and grain along the railway line. 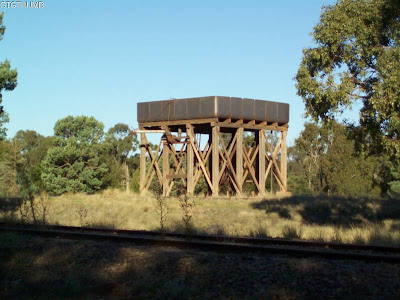 The campground is small and has no facilities except for showers and toilets. Even the drinking water has to come from a rain water tank and the tap water is not suited to drinking, with the lack of facilities I thought the price for unpowered camping was very expensive $14 a night and I get the feeling that he "fiddled" us since it is a council one. But you get places like that along the way!
Posted by Janet O'Brien at 1:15 PM