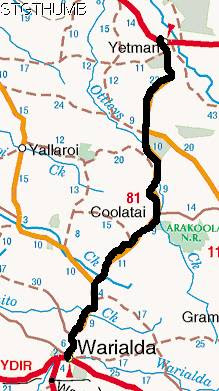 We had an extra rest day at Warialda since the camp spot was really good and everynight the caravaners were really friendly ... in fact since the park is so small I suppose you had no other choice but to chat to everyone!
This morning we left around 9am after we said farewell to Ralph and Barney (aka weasel) - Kouta took a real liking to weasel (he is a dog very similar to Kouta!). We knew from the bike toaster website that the ride to Yetman would be up and down but it is not until you actually do it do you realise just how hard it is! The first 40km to Coolatai was undulating to say the least - you are either going up or down and there is no flat road at all! The undulations themselves were steep in places and long. We had a cuppa at Coolatai ... and for some strange reason even Kouta was tired at this point! probably from all that chasing the other dogs over the past 3 days at Warialda. 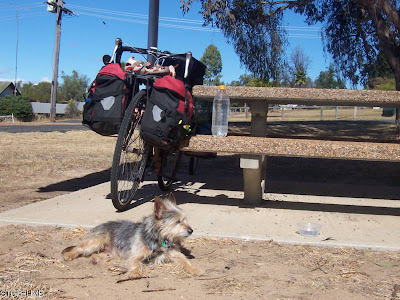 Coolatai is a very small town but I have to say that the small towns throughout NSW have the cleanest public toilets and they all have toilet paper! The only down side to the toilet at Coolatai was that it was so far away from our table! 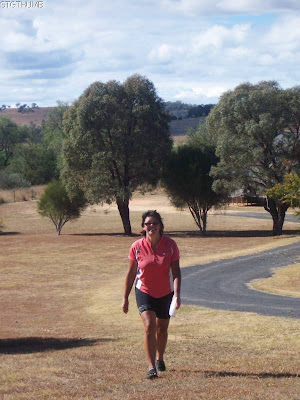 It was a looooooooong walk there and back!
Not long after Coolatai the road stops undulating and flattens out quite considerably so the going was alot easier for a while. The road also becomes a little better once you cross over into the Inverell Shire ... unfortunately the road up to Coolatai is probably not suited to caravans as it is very rough in places. Apparently caravans can feel the bad surface of the road - not so much the car but the caravan 'bobs' up and down .. just like us!
So the flat road only lasts for 20km or so and then the undulations begin again for about 10km with a wee 2km climb up a hill and then a lovely downhill to the final 15km being flat again. 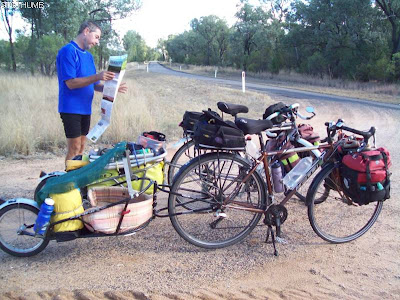 Of course we have a pitstop nearly every 15-18km and Sharon - Neil would like to point out to you that he has changed his 'pose' in the above photo - just for you. When this photo was taken it was quite late in the day and about the 70km so we were quite knackered by then. Also this afternoon we had quite a few motor bikers over take us - we assumed it was a group that were out for a ride.
Just before we got to the T junction to turnoff for Yetman we came across this paddock and its 'crop' 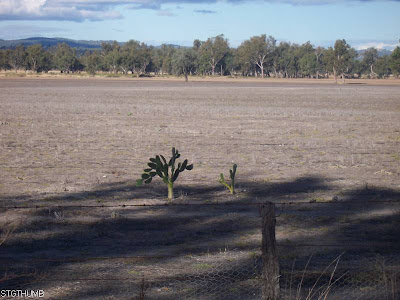 This was the only thing growing in that field!
Now Yetman only has a few houses and is not very big and is on the Bruxner highway. Not too sure what the population is but you would be lucky if there is a 100 people! It doesn't really have an official caravan park but there is camping allowed near the footy oval where they provide toilets and a shower and an area for tents and vans. It costs $10 regardless so we have hooked up the computer to power and will watch some programs we had downloaded from the ABC!
It is actually a great spot and we are not far from a table to eat on 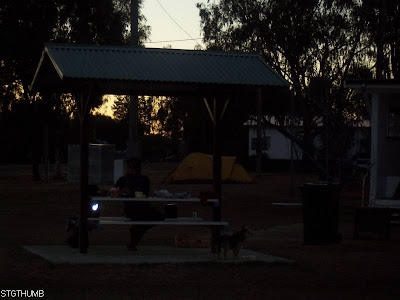 We sort of guessed that Yetman wouldn't have a store or supermarket so we got some salami at Warialda yesterday and for tonights dinner we had salami sandwiches! We normally have a non cooked meal like sandwiches, wraps or burritos when we bush/rest area camp or when the town is so small that they put you in the showgrounds or footy oval!
Tomorrow we are going to Goodiwindi and we will finally be in Queensland. We can notice a change in temperature while at Warialda and are finding it alot warmer during the day and night ... soon we will be complaining that it is too hot! ... but I don't think so!
Posted by Janet O'Brien at 6:08 PM