27km West of Forbes to Parkes 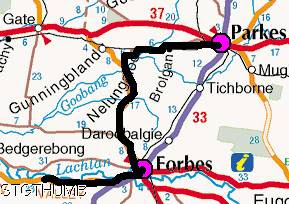 27km West of Forbes to Parkes = 79km
Cummulative total = 1368km
Here is a photo of our bush camp (I forgot to put it on the previous post). There was even a tree stump that I could use as a little table. This is our first bush camp for this trip and as per usual I managed to spook myself out by convincing myself that we were going to by attacked and murdered ... so much that I had nightmares last night of being knifed and so I have been awake since 3am this morning! Before going to bed I had to see the sky as I always thought that you could see more stars in the sky in an environment that is lacking light ... and I was right there are some many stars in the sky when you don't have town/city lights around you! But man it is pitch black when you turn your torch off ... scary!!! 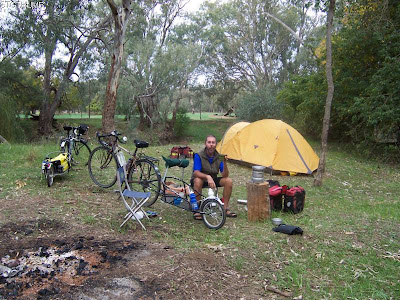 Before we started this morning I wanted to try and get a group photo of the 3 off us - that tree stump really came in handy for this photo! 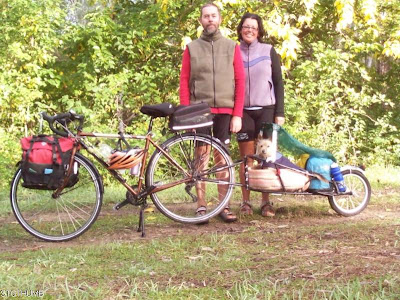 Even Kouta looked at the camera!
It was an easy ride to meet up with the Newell Highway 6km south of Forbes but once on there the traffic was horrendous and the shoulder was narrow. We had a cuppa in Forbes and decided to take a longer and back road to Parkes. We had to seek out the information center just to check to see if the road was sealed.
It was sealed but they sort of forgot to tell us about the major road works that is going on. They had ripped up at least 2-3km of the road and at times the way was quite rough! But otherwise it was great riding except of the last 24km where the road turned east towards Parkes - the road was terrible! ... Neil and I have a theory and it goes something like this ...
... Parkes is probably most famous for 'the dish' which was responsible for the world seeing the first man on the moon images ... now Neil and I both think that the reason why Parkes was chosen as a key factor in showing the man landing on the moon was because it was the closest to this road that we were cycling on, I know you are asking yourself what am I talking about?! ... the road we were cycling on looked exactly like the surface on the moon (full of pot holes and craters) so we think that Neil Armstrong and Co. were actually staying in Parkes and they came out to this road in a bubble suit and with special effects and a stary night backdrop they pranced around on this particular road!!!! meanwhile every living room in the world were seeing the images from Parkes thinking it was the moon but it wasn't it was really this road (Brolgan road I think was the name!) ... do you like our theory!!! We have another one ...
... They didn't actually use the Brolgan road we were on but they used ALL the streets that are in Parkes as they ALL are full of pot holes and craters!!! crikey I have never been in a town with such crappy roads!
Nevertheless Parkes looks like a nice town and we will be staying here tomorrow so Mum if you could turn your computer on when you get home from work I will give you a skype call around 6pm NZ time as I am not too sure if Yeoval (sundays destination) will get internet reception!
Posted by Janet O'Brien at 6:22 PM