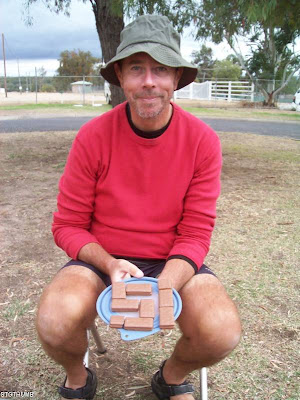 Doesn't this look like a person who is younger than 51? Well I thought for some strange reason that he was 50 this year and had spent the last 2 days on how to make a cake for him and while cycling along and having nothing else to do but think I came up with the idea of a "Tim Tam" cake - it is nice and easy and you can repack it away and eat it some other time! LOL. So while riding along I decide how many packets I will need to write '50' and I thought yup 2 packets will be enough ... then yesterday morning I realised that he is 51 and not 50 and so I only need 1 packet ... and voila! I made a Tim Tam cake for Neil!
Then Neil came up with the idea to have pancakes for Lunch - Ray had tried pikelets on the silicon mat on the bbq when we were at Griffiths and they came out okay so we got a pancake mix where you just add water and a small bottle of cream (300ml) and they came out lovely! 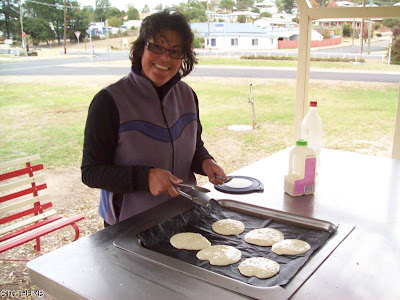 here I am cooking them - the first batch Neil forgot to tell me to put margarine on the silicon so the first 6 came out a bit funny! 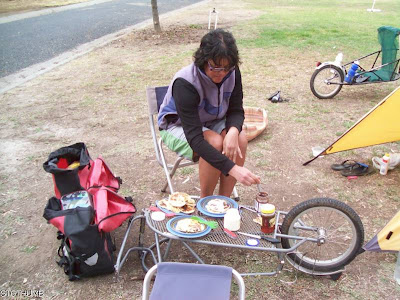 and here I am preparing my first batch - I had nutella and cream while Neil had honey and cream! 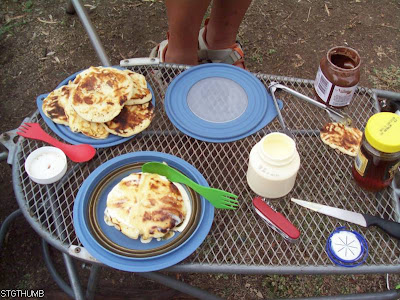 The first serve had 3 pancakes and the 2nd serve had another 3 for Neil and I had 4! while Neil had is last one by itself ... also Kouta had is own small one!
They were just delicious and we had no guilty feelings in demolishing 7 pancakes with nutella/honey and cream as we know we will burn it off next week!
Not too sure what is for dinner as it is raining at the moment and all 3 of us are piled into the tent and Kouta unfortunately has really bad wind at the moment!
Posted by Janet O'Brien at 1:47 PM