Well it wasn't as cold last night as what it was forecasted (forecast was a low of 4 degrees!) but we find that the first 2 hours after sunset are alot colder than 6.30am in the morning!
We had a latish start this morning, we headed in a south east direction towards Forbes, we knew we would have to bushcamp tonight and the Camp 5 book said Straneys Bridge (63km away). The Lachlan Valley Way is the road to Forbes and it is flat but we had cross to headwinds most of the way. To make matters worst the road was really crappy - chunky gravel road the is very bumpy and towing the trailers makes it even harder!
Kouta doesn't like that sort of road (and neither do we!) we think it has something to do with the constant minor vibrations that you can feel coming up the bike as we have to constantly shake and move our hands more than normal or else they get pins and needles! Even when we crossed over the shire boundary the road did not improve!
Looking along the way there wasn't much opportunity for bush camping as there are alot of farms right up and along the river and road frontage.
We didn't encounter the Lachlan River until around Warroo but we did find a bridge that crossed over a creek and we stopped there for a cuppa. 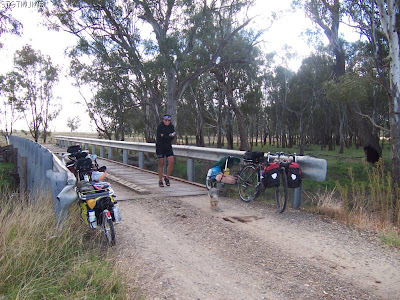 If you are wondering what I am doing I am actually running on the spot - it was a damn cold wind and the clouds began to build up so it hid the sun most of the day! 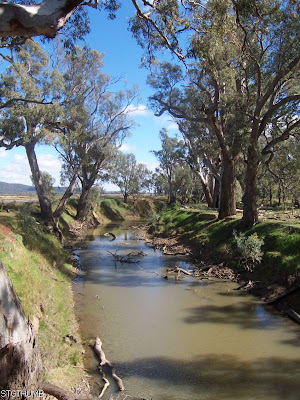 Not too sure if this creek is used for the irrigation of the surrounding farms - more than likely it is as it wasn't really flowing at all.
Knowing that we were bush camping tonight we had a full load of water with us except the bladder as we were hoping to full the bladder up along the way at some local halls rain tank! No towns along the way just 2 localities and the first one Fairholme had nothing but there was a hall at Warroo that had a rain tank with a tap so we filled up the bladder.
Just before Warroo we took a rest break and the gate at the driveway was opened and there was sheep close to the gate (couldn't get through as there was a grate across the gate) so Kouta was on one side and the sheep on the other and all Kouta could do was look longingly!!! 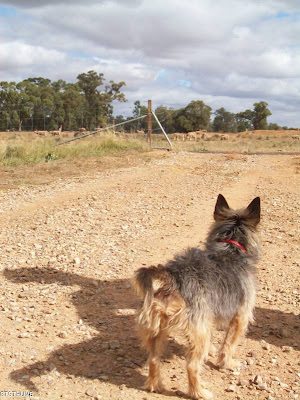 At 63km we reached Straneys Bridge rest area which was suppose to be our campspot along the river but decided it wasn't suited for tents as it was very exposed.
We decided to continue and search for an ideal spot which as we went was looking less and less likely! 10km later we found a dirt track and followed it and voila! we found the perfect campsite. Obviously someone had been there before as there was the remains of a camp fire. The spot was secluded and well of the road and beside the river but to get to the river there is a steep bank so we couldn't really dip our toes in to see how cold it was!
I was rather relieved to get to a spot as Kouta constantly threw himself from one side of the trailer to the other ... for 74km he did this! and it makes it very hard to control the bike!
Posted by Janet O'Brien at 6:00 PM