It was just a small day to Tullibigeal - we had a choice early in the morning whether or not to make the 90km ride straight to Condobolin or take the longer way via Tullibigeal ... basically it was the wind that dictated which way we went and since there was a very very strong north north east wind we opted to go to Tullibigeal with a severe cross wind. I said to Neil for the past 2 weeks we have been cycling in this area and the wind each day has been virtually non existent and what do you know we get this day which has 30km per hour winds! it was just like cycling in Victoria!
The road was nice and quiet and we didn't get much traffic. So not alot happened to us only that a group of Kangaroos decided to follow us alongside the road. At first I saw one in the middle of the road and I got really excited as we hadn't really seen any wild kangas this trip (only the ones crossing the campground but that is because it is near a state forest and to me that basically counts as something similar to a zoo!!!). Well it quickly bounded off as a car was coming and Neil didn't manage to see it and since he didn't see it he decides that I must have been seeing things! Next thing you know the same one is about to cross the road again as we pass it and it quickly decides not too and joins a group in the bushes which then begin to bound along and cross the road in front of us for at leas a km or 2!
Then not long after that we pass cattle grazing on the side of the road and I was worried as we passed that they would bolt and bowl us over! But they just stopped in the middle of eating and looked up at us as we passed. Not even Kouta was interested in them! But he was very excited when the Kangas were bounding around us!
So the turn off to Tullibigeal was around the 43km mark and it is a small town with no campground but they do have a Pioneer park and the Showgrounds which they open up to tourists so that they stop and I suppose maybe buy something in the 2 shops and this way it sort of keeps the town alive. So we pulled up to the Pioneer park and there are 3 caravans already there and 1 has been there for at least 2 weeks! It is free and there is a shower and toilets. There is also a kids playground so we set up our tent in the corner of it. 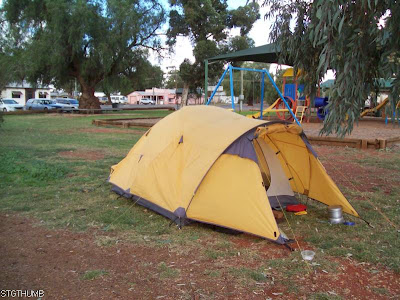 As you can see our bright yellow tent blended in quite nicely with the red, blue and yellow playground!!!
So late in the afternoon we bought a drink and 2L icecream from the co -op store and unlike when we were cycling in America 13 years ago we couldn't finish the icecream. So we let it melt and poured it over our fruit cake for dessert!!! yummy!
We went for a walk to see what the showgrounds was like and in hindsight I think that would have been a better option for us in the tent. It had a fabulous view! 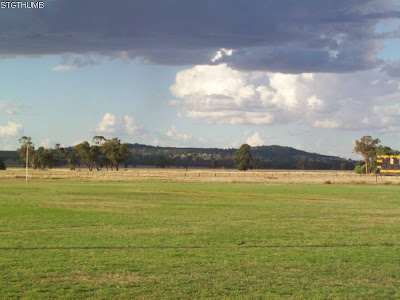 This is the view if we decided to camp in the showgrounds!
Tomorrow we head for Condobolin.
Posted by Janet O'Brien at 4:42 PM