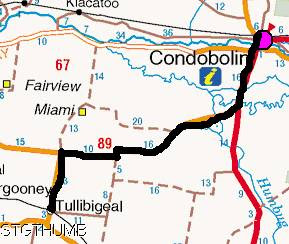 We arrived in Condobolin in good time today and it was a relief as we cycled into the town that we could see a communication tower which meant that we will get internet connection and catch up from yesterday!
So we woke this morning and new the wind had swung around to the south west west direction as there was lightening and thunder and rain last night and this must have frightened Kouta as he decided to go up and sleep near Neils head last night!
It was a grey cloudy beginning to the day and this quickly blew away to bright clear skies! While packing up this morning I came across a huge moth on one of my front panniers. 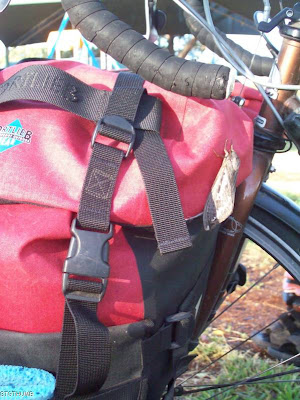 They are harmless and this one is quite small, I have seen a bigger one at Port Campbell a few years ago and that was huge!
Below is a close up of it! 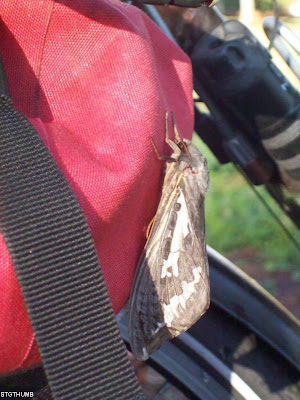 I would say it was around 8cm long but it didn't spread its' wings - now that would have been a sight!
So we left Tullibigeal and the road was fabulous until it became a one lane road with patches of gravel between sealed parts of the road! But it wasn't bad and it was a change from the sealed road. We joined the Lachlin Way road and went east towards the main road the runs from West Wylong and Condobolin.
It is lovely riding around this area and the first half of the ride you can feel you a climbing gently and then around half way you go over a small range and then down and along to Condobolin!
Not long after lunch we were just climbing up the last small hill of the range and Neil spotted a dead snake along the side of the road (it was about 1m in on the gravel part) and I had missed it so we went back to have a look and it was at least 1.5m long and Neil thought it looked like a Brown snake (so it was a poisonous one!) and by the way it was lying we think something ran over it and broke its' back. From then on I had my eyes glued to the stony part of the side of the road! I must have had a temporary lapse in concentration to miss that one!
The second half of the ride went through alot of pastoral land and all along the side of the roads are the very old telephone lines which are no longer connected up but the poles are about 2.5m tall so they are quite short. 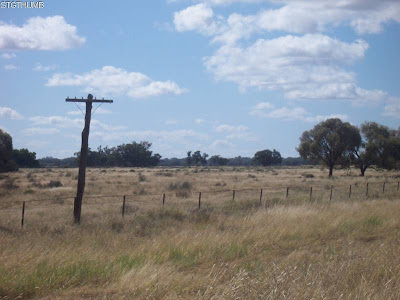 Just before we got to Condobolin we came across a rest area about 15km before the town and it would have been a lovely campspot for the night but I think it is too close to the road! 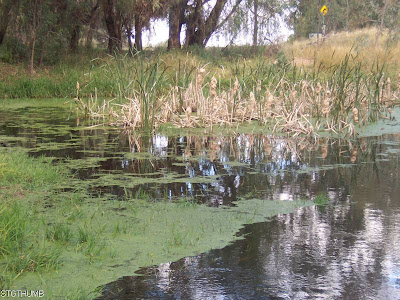 Neil liked the billabong that was at the rest area but really it was connected to a creek. I would imagine the mossies at night would be thick!
We got to Condobolin around 1pm and the campground is another council one, in fact it is run by the same council as Lake Cargelligo, but the Lake Cargelligo campground is by far better!
The town is big and has a population of around 3000 and the IGA is huge! It has everything in that IGA - even a very small craft aisle!!!
Tomorrow we follow the Lachlin river and head towards Forbes but will be camping in a rest area somewhere along the Lachlin river.
Posted by Janet O'Brien at 4:59 PM