Dubbo to Dunedoo to Coolah

Dubbo to Dunedoo = 92km
Cummulative total = 1605km
It has been a long day and we decided to go to Dunedoo (pronounced Dunny-doo). The local maps said it was 84km away and the road signs said it was 90km ... I guess the road signs were correct!
We woke to a frost again this morning and it wasn't long before the sun began to shine through and warm things up ... but not long after that a southerly wind blew right through and that made it very cold for us on the bikes! We started around 8.30am and we had to content with Dubbos' peak hour traffic and like alot of towns they have roundabouts so it gets a bit hectic on these things and since the bikes are so heavy I am a little slow at starting off on the bike! We had cross winds to start with and eventually the road switched to a direction where the wind was behind us but then again further on the road would turn and the wind would be either in front or on our sides ... can't win can we!
We followed the Golden Highway which was busy with trucks but eventually the bulk of them turned off at the Wellington-Mudgee turnoff so there was less traffic. The highway had a shoulder most of the time - generally when you needed the shoulder it wasn't there and when you didn't need it it was the size of another lane!
So not much happened to us today in fact it was quite uneventful! But we did come across a Pistachio nut farm and they were selling bags of seasoned Pistachio nuts for ... listen to this ... $5.00 for a 200g bag ... that is $25.00 a kilo!!! What rip off! What the hell is this farmer thinking you can pick them up at Woolies for $16.00 a kilo why the hell would you want to pay $25 per kilo! well I am guessing their honesty box is empty!
The road today was pretty much up, down and along, up, down and along and it was like that for the entire 90km and we got to Dunedoo around 3.30pm. The campground is great and there are quite a few campers here for the night. Facilities are excellent - free bbq, fridge, microwave, sink, table and kettle but what they didn't have was a toaster! In the campground they had this little art deco arrangement that I thought was quite humourous! 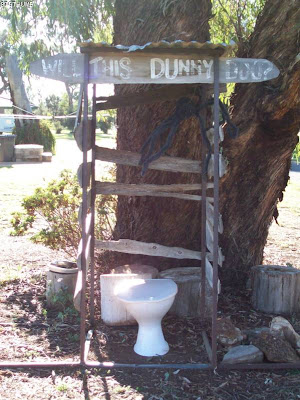 The sign reads "will this dunny doo" - a play on the pronounciation of Dunedoo. Below are a few photos of things in and around town. 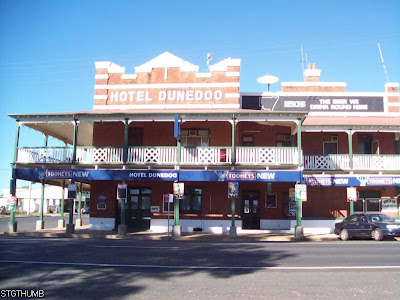 With most country NSW towns the local pubs are in all the oldest buildings - I suppose it goes to show that the pub business is the one thing that will survive any economic depression! 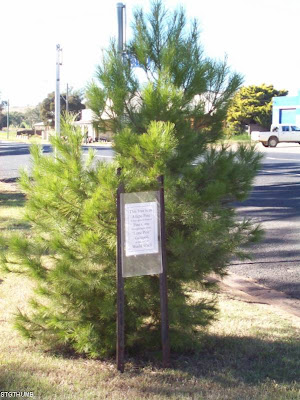 And again in most towns they will have some sort of ANZAC memorial and what caught my eye was this pine tree that was planted from a pine seed from Gallipoli.

Dunedoo to Coolah = 48km
Cummulative total = 1653km
We woke this morning but not to our usual alarm of "drip, drip, drip" from the condensation under the tent fly as it drips onto our front mat ... why? ... because the condensation was frozen!!! Can you imagine that it definitely got below zero last night and I reckon at least minus 2 degrees! This is the first time the condensation has frozen up into sheets of ice and even Koutas water in his drinking bowl began to freeze! Lucky he didn't get his tongue stuck to the ice floating in it LOL wouldn't that be hilarious! You never really know just how could it is outside the tent as the inside of the tent is relatively warm (around 5 degrees which is warm by our standards!) and it is even warmer under the sleeping bags! Neil keeps reminding me that I was only going to bring a light polar fleece blanket for this trip as I thought it would be warmer ... lucky I didn't listen to myself and bought the down sleeping bag along! But despite the cold start to the day it quickly turns into a warm sunny day (like most autumn days up here).
Last night we had 2 freight trains come through at 1.30am and 5.00am and boy were they loud - considering the railway tracks are about 50m away from the tent ... but there are caravans that are even closer than us!
The ride to Coolah was nice and relatively flat (we expected undulations) and we took the Golden Highway again for 11km and then we turned off on to the Black Stump way. At the junction there is a lovely rest area but no camping as Dunedoo campground is just down the road but I would imagine that it would get quite noisy there at nights with the truck traffic from both roads. The black stump way meanders its way through an open valley floor with ranges either side. 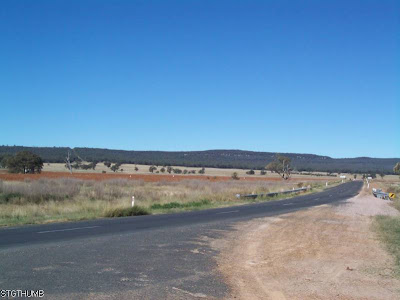 Although the scenery through this valley was lovely the road as per usual was crap! We got to Coolah early afternoon and the campground is really quiet we are under a poplar tree that will hopefully keep the frost off the tent. The sun is setting and once it goes down it drops in temperature really quickly. The town of Coolah reminds me a bit of Maldon in Victorial but maybe not as old. The town is very English looking with heaps of Willow and Poplar trees that look stunning in their autumn colouring.
While getting a few food supplies at the local IGA we walked past one of the town pubs and saw this bike towing 2 home made trailers behind it. What do you think Dad? ... don't even think about trying to build this and travel with it! 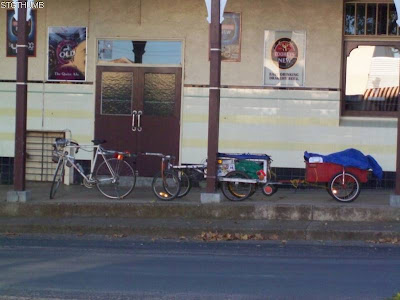 Neil couldn't get over just how heavy the bike would be and that you couldn't tour with it (I think he thought that someone is touring with it) but I thought that it would be a local ... and I was right the guy lived in the caravan park and looked to be very 'eccentric'
Posted by Janet O'Brien at 5:55 PM