Parkes to Yeoval to Dubbo 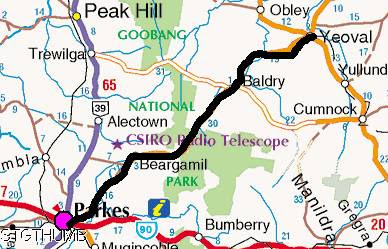 Parkes to Yeoval = 72km
Cummulative total = 1440km
The first 19km out of Parkes via the Renshaw-Mc Girr way is a gentle climb towards the ranges in Boogang National Park after that it is climbing to the top of one range at approximately 35km. We sort of resided to ourselves that we wouldn't get to see the dish but we had hoped we might see it from the top of the range but luckily for us we saw it just before we began climbing the range so we stopped for some photos! 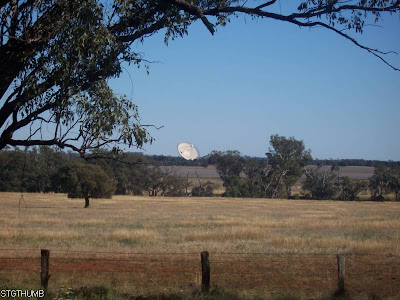 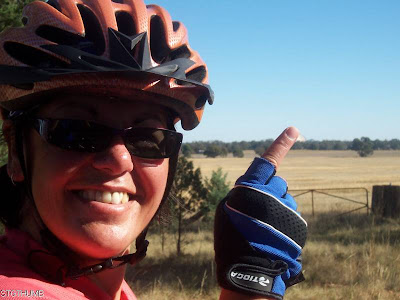 Here is me with my finger on the dish! 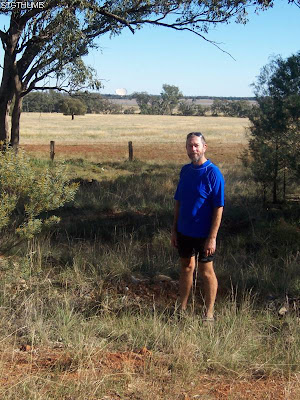 And here is Neil with his typical photo pose!
We were quite chuffed that we got these photos and as we were there it moved constantly - not sure what alien they were tracking!
At the top of the first range we stopped for lunch and then I was expecting a downhill but there was no great downhill just up and down over the next set of ranges! And it was like that all the way to Yeoval. But funny enough in the middle of NO WHERE there is this telephone box! 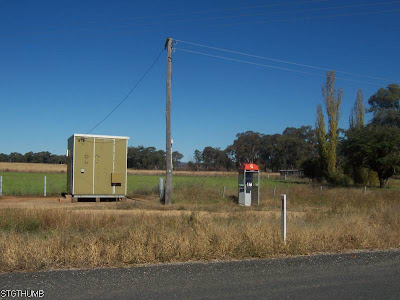 I forgot to mention that just after lunch Neil saw a 1m red belly black snake but it was about 3m off the road so I missed it completely we did to a U turn to go back and see it but it slithered off.
And I also missed seeing the shingle back lizard that was on the side of the road but it stayed there for me to go back and have a look and take a photo! 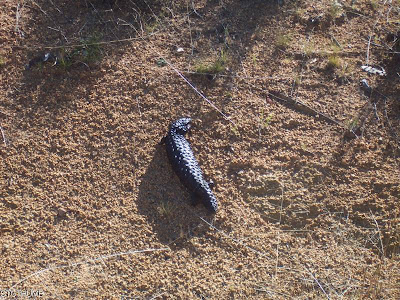 Missing all the wildlife - I must have had my eyes closed all day!
But after the snake I was on edge and every stick that was near the road was looked at and any movement in the grass (which at times was long and ride beside the road!) made me very nervous!
Yeoval is a nice small town with a population of under 200. And it boasts as the first home of Banjo Patterson (the famous Australian poet who is the author of man from snow river and waltzing matilda i think!). It also has a thing about bikes! 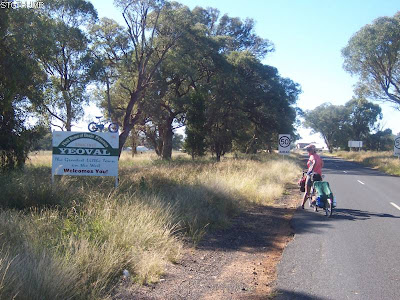 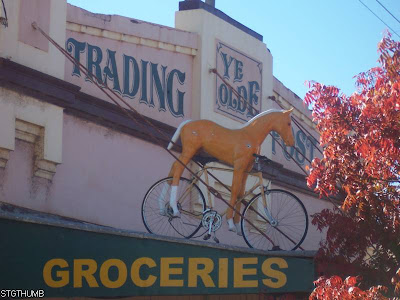 above the general store is a horse riding a bike (man they are weird in country NSW!) 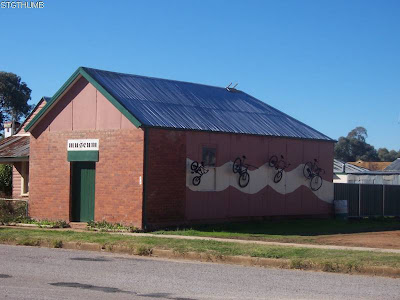 and then there was this with bikes attached to the wall ... but funny enough we didn't see anyone riding bikes!
We found the showgrounds and this was to be our campspot - not as good as Tullibigeal but it had a rain water tank and toilets (which were really antiquated! and had no toilet paper!) they do ask that you donate $5 but I think not since we didn't use any facilities and used our own toilet paper! 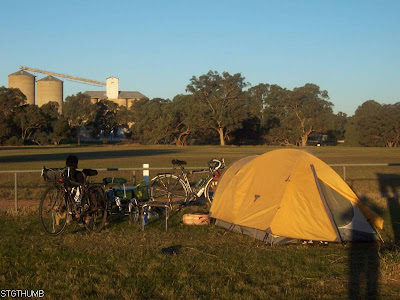 this is the campspot and we were the only ones here for the night - not too sure if they get many passerbys! 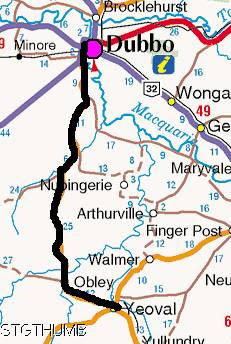 Yeoval to Dubbo = 73km
Cummulative total = 1513km
We woke this morning to a frozen tent! we are not joking! although we were very warm in the sleeping bags we were very surprised to see the drips on the outside of the tent were frozen and the seats and neils front panniers were covered with frost. I will post up photos tomorrow of this as I forgot to add them to this posting.
Neil said at 3am his thermometer said 3 degrees and that was in the tent! I would imagine that outside it would be around 0 or less!
We left a little later this morning and for the first 25km it was just up and down with some big undulations. After that it was up and down with a little more of the down than up. So you could say we had a day of undulations which actually wasn't that bad ... it actually was the condition of the road that really made things tough. For some strange reason the roads are really terrible up here - I mean the actual making of the roads are more slap dash without levelling and blending in with the existing road ... basically we have ridden on unsealed roads with bad corrugations that are smoother than the road we rode today! I think being on a bike we are a bit more susceptible to the conditions of the road!
We are staying here tomorrow but will not be visiting the zoo as I don't think they will allow Kouta in! The road we came on today passed the zoo but we couldn't see any animals. So tomorrow we may just look around Dubbo.
Posted by Janet O'Brien at 4:15 PM