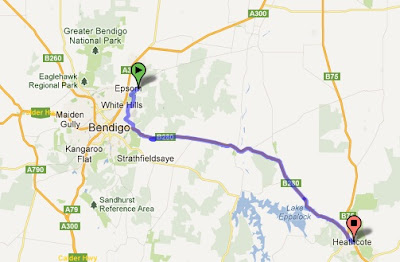 BENDIGO TO HEATHCOTE (via O'Keefe Rail Trail) = 56km
CUMMULATIVE TOTAL = 2983km
QUEEN MEADOW CARAVAN PARK = $20 unpowered ($25 powered)
It was a very hot day yesterday in Bendigo and I think it did hit the 40 degree mark!  At night it took until 6am in the morning to hit 24 degrees - so most of the night was in the 30's.  But we both slept well ... maybe we got use to the bed!
Despite being 24 degrees at 6am it soon became warm again, it was cloudy and absolutely no wind so it felt very muggy.  We said our good byes to Leanne and Russell ... somehow I got the feeling they wanted Kouta to stay and I think if Kouta could talk he would say that he was in 2 minds as to whether to stay with Leanne and Russell or come with us!
We had decided, after Leannes' friends knowledge about the railtrail to Axedale and insisting that it has been repaired after storm damage etc., that we would have a go at riding it.  So we rode back along the bike track that we came on until we saw the O'Keefe Rail Trail turnoff and from there you cross over the main highway that goes through Bendigo and you are at the start of the trail ... 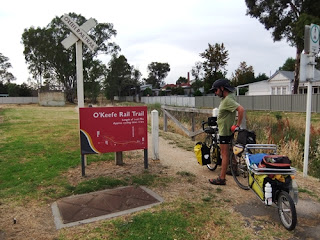 No sooner had you begun on the trail that you come to a short, narrow and not very high tunnel that goes under the existing railway line ...﻿ 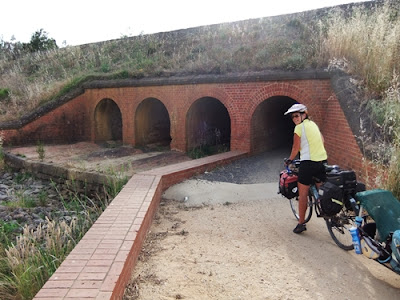 ﻿
﻿
Now I wouldn't say I am an overly tall person, if anything of average height, but as I rode through this tunnell I did hunch over for fear that I might scrape the top of my helmet!
This railtrail is predominantly lilydale topping with the odd sections with a more chunky gravel/stones.  It crosses a few roads which can be busy early in the morning so you have to wait for slightly long periods at some of the roads.  We did get lost a bit and ended up outside some Bendigo defense regiment so there is a part on the trails where all of a sudden it becomes a very wide track ... if you are on this then you have missed the railtrail turnoff (which is not signposted at that point) but we could see the path so we rode up the road a bit and rejoined it.
The trail is good until you get to the Pony club and from there it was a bit tough with the loaded bikes - definitely doable (if there is such a word!) but you definitely have to concentrate and be prepared for running over some big stones! 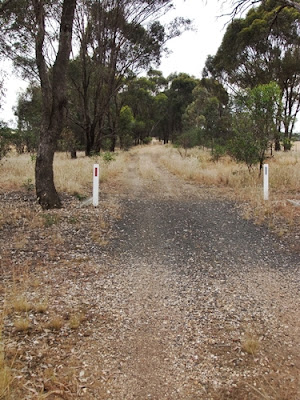 If you weren't loaded this is definitely a good trail and ridable - the bridges are all new and where there has been previous storm damage is fixed or if it isn't the ruts created by the storm water on the trail have been ridden over by so many bikes now they are more rounded and are easy to ride through or over.
At the end of this trail they have extended it to go into the township itself - not sure if there was an 'over doing' of the trail at this point as for some strange reason there is this switchback  which doesn't need to be there - but it is a well compacted trail here into the township - the only let down is the public toilets at the park the trail goes to.  These toilets are probably the worst we have encountered on this trip - not only dirty but also very dark when you closed the door - I didn't close the door as I didn't like the darkness of it all! (I couldn't care less if anyone saw me!)﻿
From Axedale we jumped on to the McIvor Highway which was busy but had a wide (and good) shoulder for us - in hindsight it probably wasn't a good idea to have a break in Axedale as when you start again you go immediately down to the river and then have a steep climb back out and unfortunately the legs hadn't warmed up and the climb itself was an absolute shock to the legs as they weren't warmed up - despite the very hot temperatures.
Riding along I was sweating like a little piggy!  It was about 30 degrees and now the wind was gently blowing from the north and west a bit (yeah a cross tail wind) and I have to admit and I thought I would never say this but the wind wasn't blowing hard enough!  A stronger wind would be more cooling.  Poor little Kouta he was hot as well and on this highway there were a few down hills for me to go fast so that it provides a wind to cool him down!
Happy to get to Heathcote just on lunch time, the park is large  and the unpowered section is massive - has a few big trees of which we are camped under one.  At this point it is still cloudy and only a breeze every now and then so we are still very hot.  I think this was the hottest I felt on the bike so far.
Not sure if there is much storm activity about like they all predicted, it is trying to rain but to no avail.  It is slowly cooling but not quick enough - tonight it will get down to 16 degrees which is okay and tomorrow it is still warm at 27 forecasted.  We will make Seymour tomorrow and go via Puckapunyal which is the Army base.
Posted by Janet O'Brien at 4:33 PM