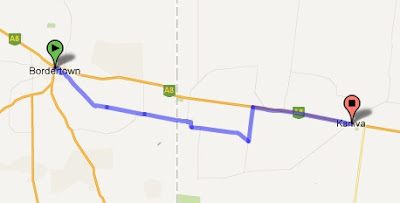 BORDERTOWN TO KANIVA = 52km
CUMMULATIVE TOTAL = 2555km
KANIVA POOLSIDE CARAVAN PARK = $20 powered ($15 unpowered)
This post is a day late as I had bad hayfever yesterday and didn't feel like doing the blog ... in fact didn't feel like doing anything!
﻿
So today we are taking a well earned break here in Kaniva and despite all my insistance that we were going to continue today (a fifth day of cycling) as it is a very strong northerly to assist us as we were to drop south a bit we haven't gone as Neil convinced me with an alternative route for tomorrow (with a tailwind!) and he threw in a pancake breakfast on our rest day for good measure ... so I took that deal ... he still owes me a day!
Way back in Bordertown after I had written up the blog post we went for a walk down to the Nature reserve they have on the edge of town.  You can't go in it but you can walk or drive around it.  In it they have some Kangaroos of which quite a few are white .... I kid you not ... they are NOT albino just an off shoot in colouring of some Grey Kangaroo they caught on a property between NSW and SA border, here are some snap shots ... 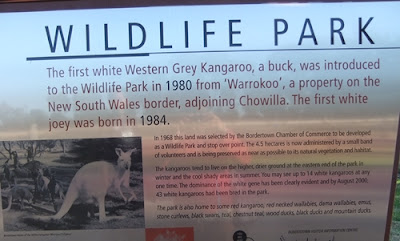 this is one of my favourites ... 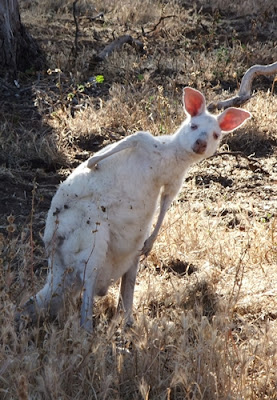 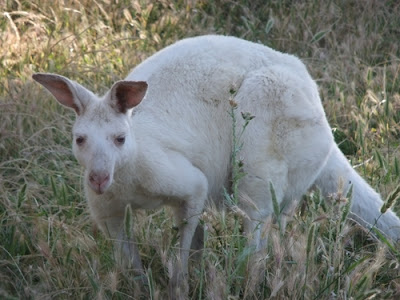 the next one is very talented and sent you a message Ray ... 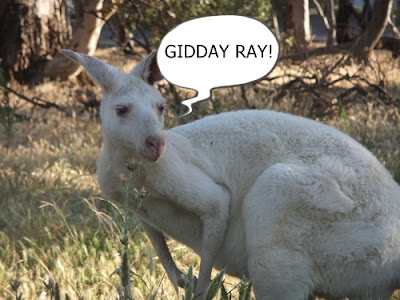 and we think this one had some kind of disease ... 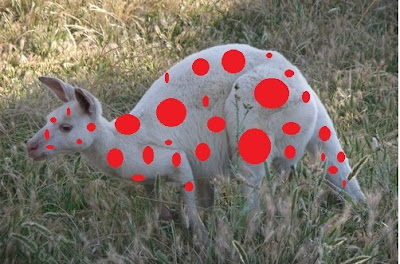 ﻿It is a very nice park and the town itself is quite well presented.
We left very early the next day hoping to get some km's in before the wind as it was to be a gentle easterly - a headwind ... but unfortunately it got up early with us and was quite a strong wind.
So I  definitely felt it while riding - the legs are tired from the past 7 out of 8 days cycling and all into headwinds.  I think Neils offer is looking good!
At Wolesley we stopped to have a look at the fuel tanks in a field that were built during world war 2 as tanks to store fuel - apparently the were camouflaged ... 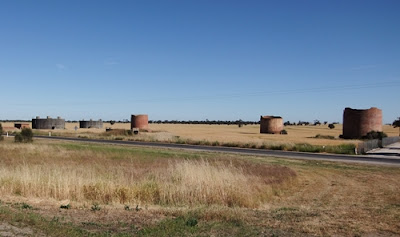 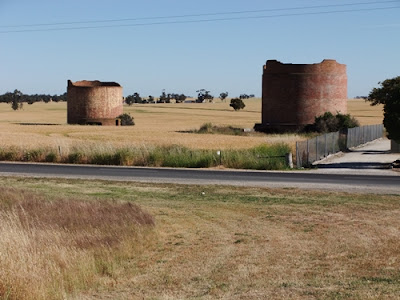 Just after Woseley and before Serviceton we crossed the border into Victoria and gained 30mins! 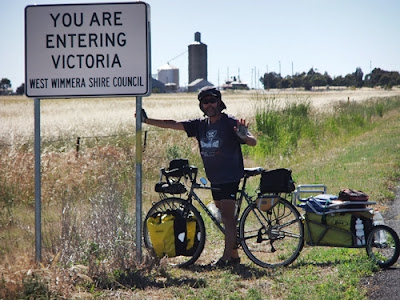 and with this border also comes a distinct change in the condition of the road ... victoria let us down in this picture with 2 little pot holes to welcome us ... 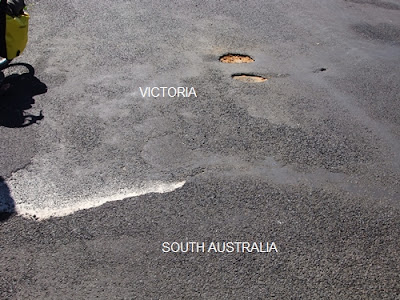 ﻿
﻿
﻿
mind you this was the only pot hole along this road.  Once at Serviceton we got a bit lost as we didn't have a map and the road signs only direct you to the highway so Neil asked a local and they drew us a map.  We continued along this one lane road until it came to a dirt road and from there we had to go on the highway for the last 14km
The Dukes highway in Victoria is alot better than South Australia - the shoulders are wider (the width of a small car) and are sealed with one layer and not a mish mash of multiple layers that get shorter and shorter in width each time the reseal the road.  In saying that the last 6km into Kaniva was resealed by a gang of South Australians as the shoulder was exactly like it was in South Australia ... lumpy and bumpy.
Glad to get to Kaniva which is a small and well presented little town.  The caravan park is next to the swimming pool and is a community one.  Not too many people here in fact just us at the moment and more than likely a few will stop later in the day.
The town has these decorative art sheep all up and down the street ... a fun community project .. 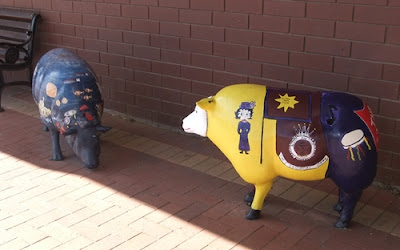 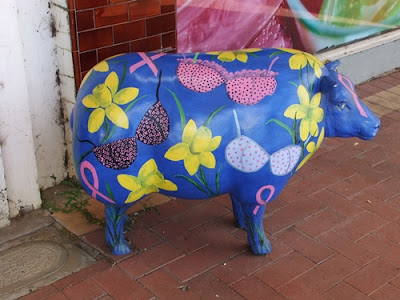 it also has a huge windmill just outside the information center 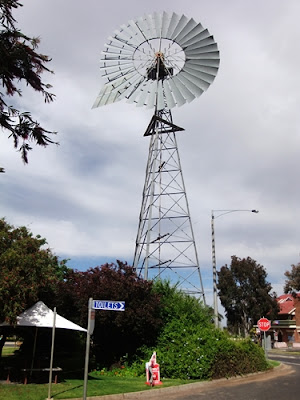 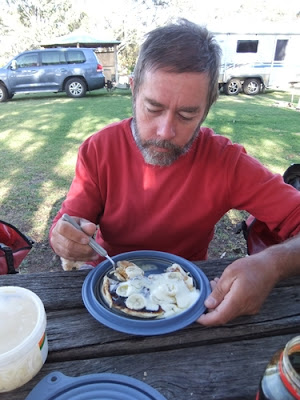 ﻿
it looks nice doesn't it?  We had golden syrup, cream and banana on them.  Neil has decided that we will carry golden syrup instead of honey as it is cheaper!
The hot northerly is blowing around 25km per hour with gusts up to 40km per hour and the tent is sheltered from it a bit but unfortunately it gets late afternoon sun ... the clouds are building at the moment so heres hoping we don't have the sun on the tent later on this evening.
Tomorrow﻿ since it is suppose to be strong south wester we are going in a north east direction (so the wind is directly behind us!) to Jeparit - went there last year and unfortunately after that we will have to have the next day as a cross wind!  we can never win with the wind!
Posted by Janet O'Brien at 1:24 PM