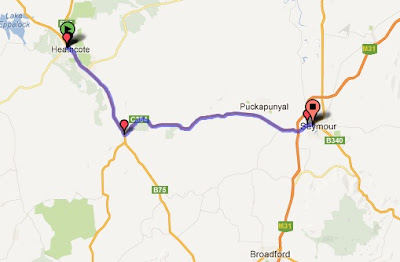 HEATHCOTE TO SEYMOUR = 50km
CUMMULATIVE TOTAL = 3033km
HIGHLAND CARAVAN PARK =  $25 unpowered
By the major highway we are probably only 100 odd km's from Melbourne - we can almost smell Bayswater from here and we are beginning to get what Neil calls 'white line fever' where we are so close that we will just ride and put up with anything to get home!  As tempting as it is to jump on the Hume highway and just ride we have decided to have a go at combining 2 small days in one tomorrow and for go our rest day so we could be back in Melbourne as early as Tuesday - depends on how we go on the rail trail.
So on to today - it was a nice ride and again this morning it was incredibly muggy.  It was a warm night again with thunder and lightening but not much rain, very warm night.  Left early this morning and Heathcote was just setting up its' market stalls - a combo of handmade and car boot type market.  We thought an early start  would be a good idea as the first 15km are on the Northern Highway (just before we got to Heathcote yesterday the McIvor highway merged in with the Northern Highway which is the road to Echuca if you don't want to go via Bendigo) but unfortunately there were a few cars around - lucky for the shoulder! although there were more cars going North than coming with us South.  We turned off at the Puckapunyal road just before Tooborac and 2km along this road (which is a continual climb from Heathcote even though you don't realise you are climbing it is that gradual!) we passed the 3000km mark so a big 'woo-hoo' shout out from both of us!  This was the view at the 3000km mark ... 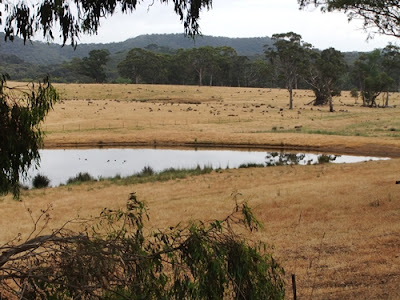 We took a quick break as it was still hot, still and muggy and the sweat was just pouring of us! 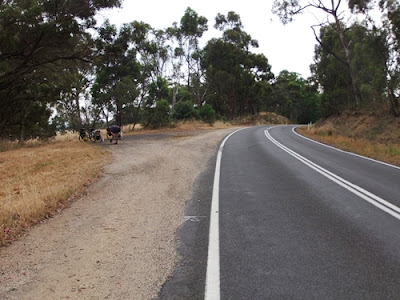 About 3km along this road you hit the top of the climb for the day and from here it is undulating to get down - with alot more down than up!
Also about this point the left side of the road is now the Puckapunyal Army Base (at least I think it is Army) so every 500m you have these warning noitces along the fenceline .. 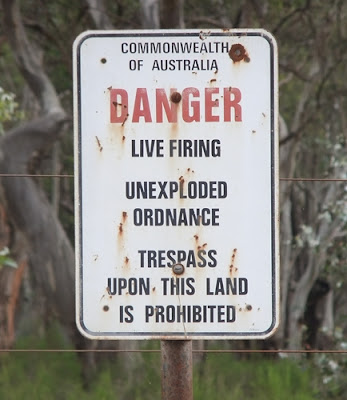 So all along this road are warning signs and electric fences.  We didn't see any tanks moving or soldiers exercising etc but all we saw was these ... 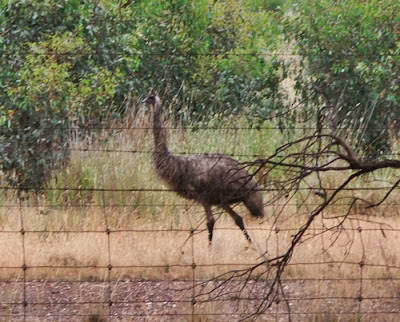 At first we thought that there would be soldier patrols along this fenceline as with all the warning signs they have along the fenceline they sort of have advertised that this area is something to do with Australian Defence so that it is providing a target for itself with terrorists - however don't be fooled with this innocent photo of an emu - Neil and I saw through the SAS 'new' camouflage disguise straight away ... this emu we reckon is an SAS soldier, in camouflage, patrolling the fenceline but unfortunately it did one major characteristic of the emu wrong .... it didn't run around like it's head has been cut off when we stopped to take a photo!  We are not joking this is the very first Emu that we have come across in our travels that is not sprinting away from us when it saw us - hence we think it is fake!
At about 34km we stopped along the road edge and had a cuppa and we both were thinking that we haven't heard any gun fire and then all of a sudden you hear something that ressembles machine gun fire in short bursts and as time ticked by, to me, it sounded the machine gunning was getting closer and closer.
Somewhere along this road (I can't remember the km mark) we came across, what I thought was, the main gate into Puckapunyal so I took a photo for you Ray - does this bring back memories? 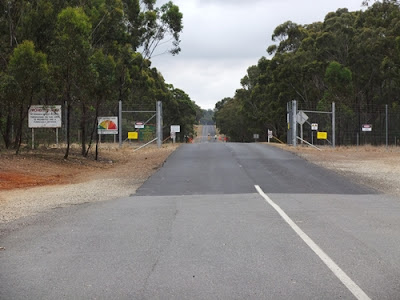 at first I thought this is a rather dull and unappealing main gate for Puckapunyal and then I thought that you probably wouldn't want to advertise that this is a Defence Army Base but I was wrong this is not the main gate that is further on as our road merged in with the main road that comes out of the base so I missed the opportunity to get the photo of the main gate for you Ray - as when we merged the road was quite busy and the road became even busier as we went under the Hume highway towards Seymour.  But I did manage to get a photo of something for you ... 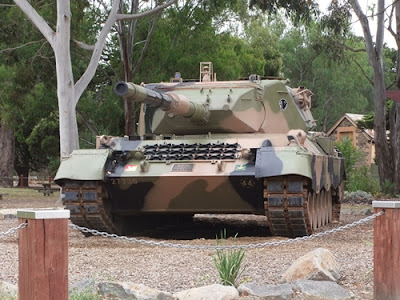 Went to the information center to get a map of town for tomorrow when we ride down to Tallarok to start the Goulburn River High Country Rail Trail.  The best way to get there is actually down on the Hume highway the back road is a little convoluted and I can see a gap between 2 connecting roads and although Google Maps says there is a connection I am doubting that as Google Maps has been incorrect quite a few times!
So we are at the Family Parks caravan park and it is a little run down, the guy has sold it and settlement is in 16 days so not alot maintenance and work done around here lately!  A bit on the expensive side at $25 unpowered.  Has a camp kitchen so that is okay.  Big day tomorrow if we can make Alexander if not Yea.
﻿
﻿
﻿
﻿
﻿
﻿