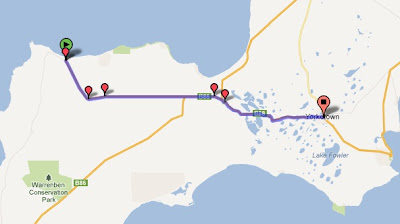 CORNY POINT TO YORKETOWN = 55km
CUMMULATIVE TOTAL = 1869km
YORKETOWN CARAVAN PARK = $25 powered
This post is a little delayed as it was a stinking hot day yesterday and night and even now so I have sort of waited until it has cooled down a bit to sit in the tent and do this.
Knowing yesterday was going to be a hot day we got up early and left around 7.30am before it got to hot ... by 8.30am it was hot!  There was not much wind around and when it did come up it was a gentle tailwind.  Basically we were about to complete a small loop between Wallaroo, Marion Bay, Corny Point and then back again through Wallaroo.  Being a Sunday morning there wasn't alot of traffic around up to Wallaroo.  As you can see from the profile there was a few bumps along the way but nothing major ... we did get a good view of Hardwicke Bay (you can see Point Turton in this photo) from the hill just before Wallaroo (around the 34km mark) 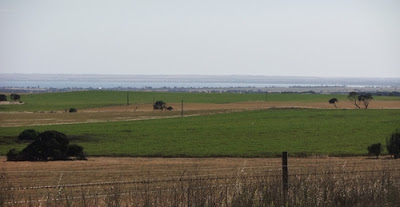 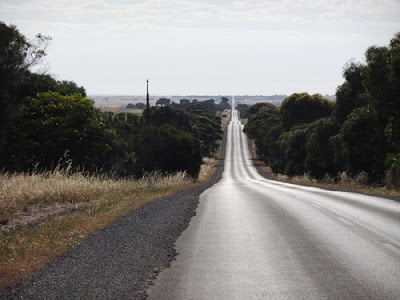 We got the last loaf of bread at Wallaroo and had a cuppa there ... the food bags are very light and will need to be restocked with the basics very soon!
From Wallaroo we joined the  St Vincent highway to Yorketown (this highway continues up the east coast of York Peninsula) and there was a marked increase in traffic - there was a big British motorbike group going the opposite way to us and I tell you some of them were going barely faster than us and they all sounded like they had lawn mower engines!
By now it was a stinking hot day and the wind was behind us helping us get to Yorketown!  About halfway we go down to some very flat country and there are the remains of saltwork beds ... 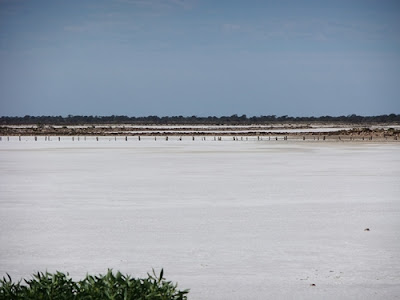 Generally when you see these white dry salt beds it makes you thirsty!  they look so dry!  We also came across an interesting position for a birds nest ... 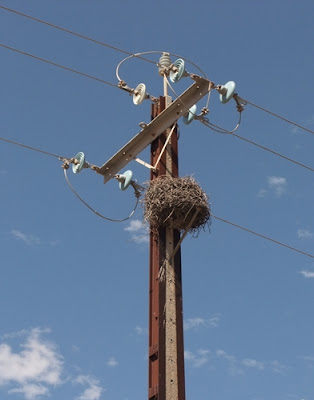 it was a very good view but also a very long drop to the ground should the wind blow to hard ... speaking of wind we are at Yorketown today having a rest day ... the forecast for today was to be another hot day with chances of thunderstorms ... well it is definitely a hot day (it got as low as 25 degrees last night so all 3 of us didn't get much sleep!) around 32 degrees and it is blowing around 50km per hour and coming from the north so had we cycled we would have had a head wind so happy to be here in Yorketown.
You know how Neil is really good at finding things? well his find today is somewhat different to what he normally picks up ... but you are going to love this Sharon ... he was riding along not long after I took the above photo and saw some small package on the side of the road, but he ignored it (mmm that is unusual!) and a little bit further on he sees the same package again ... and again he ignores it and thinks that it doesn't look useful to him ... about 1km further along he sees a 3rd small package like the first and second and thats it he thinks and it gets the better of him and he stops and picks it up ... it is an unopened packet of Mentos 'aqua kiss' watermelon flavoured chewing gum .. now we don't chew chewing gum (I find it makes me want to eat!) so we are saving it for you Sharon as we think you chew it (and also because when you read this we want to be able to hear the scream - LOL!)
The Caravan park is nice, small and quiet with grassed sites but no shade so we put up the shade cloth and sat under that for the bulk of the afternoon.
Today is just catching up ... would do some washing but the threat of rain is all around but nothing seems to come of it and because I have thought that 'if I do the washing it will probably rain' ... it probably will happen ... so one more day in these clothes is ok!
Tomorrow we head for Port Vincent ... Oh and Flo you were right that photo is of Barley ... I didn't pay attention to the photo properly!﻿
﻿
﻿