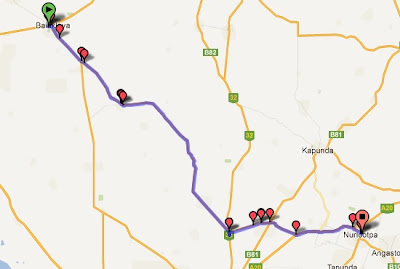 BALAKLAVA TO NURIOOTPA = 77km
CUMMULATIVE TOTAL = 2129km
BAROSSA VALLEY TOURIST PARK = $23.40 (with discount) unpowered
Crikey it was a tough day today!  We got up early thinking that we would arrive early as the wind although suppose to be from the east (headwind and crosswinds) and only gently blowing was wrong - it was an easterly but hell it was blowing ... I don't think South Australia has gentle winds ... I just think it blows all the time from any direction during the spring time here!
We did leave around 7.45am and knew that the bulk of the day would be gentle climbing (have a look at the profile).  We had our first small break in a place called Owen.  It had a great information board about the town and the surrounding area and what it grows ... we have started to see a new crop - lentils and also some of the fields that we saw on our way here about 4-5 weeks ago are now brown especially the bean crop, the lentil crop is now a golden colour as with all the grain ... have yet to see any vineyards yet!
We had a cuppa about half way at Hamley Bridge (a town between 2 rivers albeit empty rivers!).  We sat on a bench on the side of the road as they didn't exactly have rest stop facilities.  The bench was near this very pretty Liquid amber tree ... 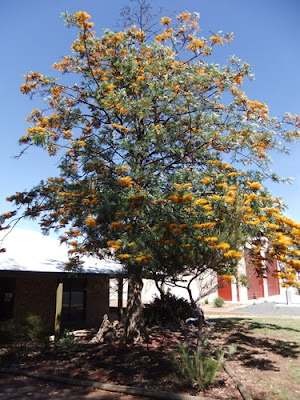 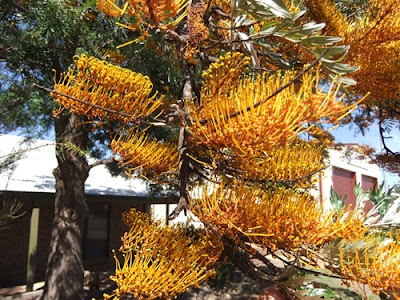 from here we continue in a south easterly direction and come to a place called Templers where we cross over the main highway and continue east towards Nuriootpa.  Just at the junction there we pulled over for a quick jam sandwich ... and while Neil went off to photograph the bean crop I had quality time with Kouta ...
﻿
﻿ 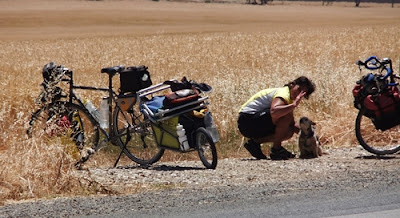 Here is some photos of the bean crop which we think is being harvested now as we saw some machinery in a field that had just been cut ... 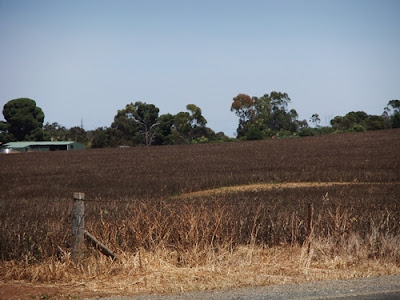 Neils close up of the plant wasn't a great photo in the end ... I don't think he can see the viewing screen!﻿ 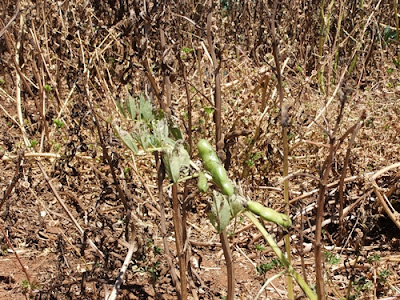 The been on the left is when it is green and once the field is really a dark brown and the pods are dry they must cut the field ... apparently these beans are for both human and stock consumption!﻿ 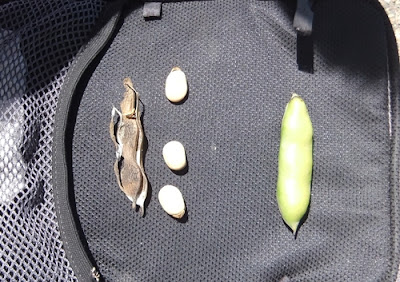 ﻿
﻿
By now the wind has died down a little bit I think, but  probably because we are starting to enter the hills we just don't feel it anymore.  The sun is also warm and up until Templers we hardly had any traffic now we have quite a bit as we get closer to the bigger towns.
Just outside Freeling I took this photo as it was my first view of vines since 4-5 weeks ago, the greeness of the vines looks lovely against the grain fields ... 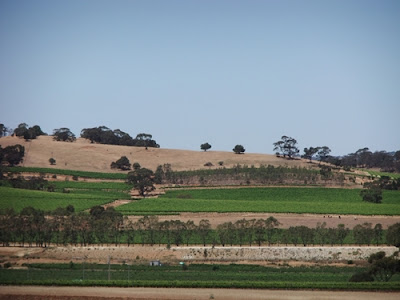 ﻿
12kms along from Freeling we come to the main highway that goes to Blanchetown and eventualy Renmark (highway 20) and it is a 2 lane highway with a shoulder.  We join it at the bottom of the hill and climb for 3km then down a bit and climb again for another 3km ... all up we were on it for 7km and then we took the Nuriootpa turnoff.
I thought I would be happy on the this main highway as the shoulder would be smooth compared to the other roads where the shoulder was very rough and off course with increase traffic they expect you to ride in the crappy shoulder ... anyhow the highway shoulder was definitely smooth but unfortunately due to budgetary demands when they resealed the highway they only resealed about 75cm of the existing shoulder (sometimes smaller and narrower than 75cm!) so at times we were procariously close to the traffic, if a truck wasn't in the inside lane we moved to the unsealed section which was sometimes a 4-5cm drop!
After the Nuriootpa turnoff it is another 7km to the town itself.  This is a big town of around 4800 people.  The top tourist caravan park is next to the 2 ovals and tennis courts.  At the entrance is a one of the first caravans ever made ... 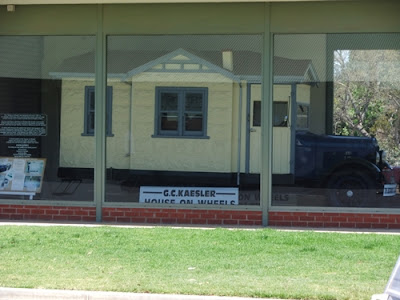 It is called a house on wheels and built back in 1931.  The builder took his wife and 3 kids and travelled (on unsealed roads) throughout South Australia and the Eastern States.  It has a collapsible table to become a double bed and 3 bunks, an oven and food prep area the write up also said a toilet but I am not sure where that would be!
We have gone unpowered here and most likely will stop here tomorrow due to some hot weather coming and it is a nice enough park ... our spot is under pine trees and is in shade for the bulk of the day ... 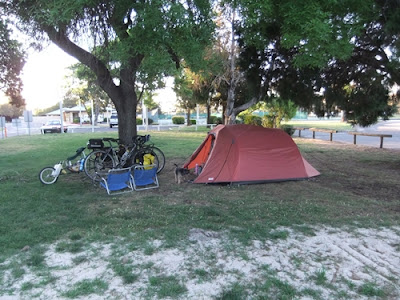