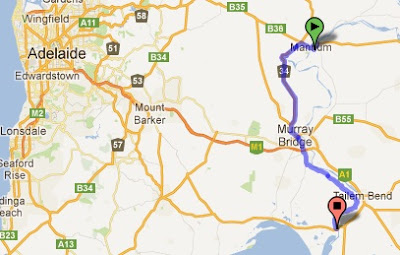 Not much to report today - we had a good nights rest after the tough day yesterday.  We woke early as the ferry crossing became a bit noisy with everyone using it.  We caught the ferry going across at around 7.30am and we thought we would be the only ones on it at that time in the morning but a truck got there just as we did ... he went on one side of the ferry and we balanced it out on the other side ... 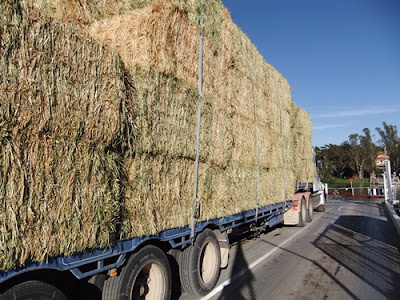 LOL it was a very heavy truck and as the ferry went across you could see that it was on a lean!
Since it was early it was easy to get through town and then up the hill to get out of Mannum.  If you look at the profile for the day you can see it is very undulating but our bonus today was the wind albeit still from the south was a hell of alot less than yesterday.  Blowing generally from the east south east we had a cross headwind but we did manage to coast down the down hills rather than have to pedal down them like yesterday.
So it is undulating to Murray Bridge and the hills get progressively less and less in height.  We got to Murray Bridge at around 10am and stopped for a cuppa, to get Neils drugs and to stock up at the local Woolworths.  We continued on back along the road we came along from Tailem Bend, this time it was a lot quieter than when we came through so it was nice riding.  Still a little up and down but easier.  Once we got to Jervois we continue down to Wellington.  It is relatively flat but the road is exposed to the wind which by now had picked up but was still ridable.  The road is very narrow and patchy and in poor condition.
Last time we past through here Feb 2011 all the small milking sheds along here weren't in use and the fields between the murray and the road were not being used (no water to irrigate) and there was only the odd green field with very few cattle ... whereas today all the fields have been irrigated and contain heaps of cattle (alot of little baby calves ... oh how sweet!) and or hay and the small milking sheds look like they are in use.﻿
Got to Wellington and the park is small and basic.  Internet is not good here for optus (not sure about telstra) we keep loosing reception so this is a very short and sweet post.  Tomorrow of to Meninge.
Posted by Janet O'Brien at 4:54 PM