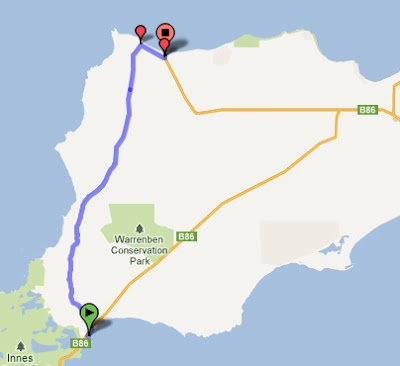 MARION BAY TO CORNY POINT = 45km
CUMMULATIVE TOTAL = 1814km
CORNY POINT CARAVAN PARK =  $24 powered
Only a short day today but not an easy one ... I have decided that I am never going to support push bikes paying a rego ... in the past I have always thought we should pay especially if it stopped the ridiculous notion that by paying a rego that gives us (pushbikers) a right to be on the road (despite we do pay taxes which the building of roads is predominantly funded from!).
So you ask why am I not supporting paying a rego ... because we just went on the most ridiculously lazily made road ever!  I tell you it was a waste of 3 million dollars to slap a bit of tar and pebbles on the ground and call it a road.  Basically if I paid a rego I would expect the road to have been graded first before applying tar and pebbles!  It was that lumpy and bumpy it was unbelievable, my hands and feet were full of pins and needles from the 40km of small vibrations!
Anyway enough of me ranting ... I forgot to mention last night that Marion Bay water supply is from a desalination plant.  This is the first time we have tasted this type of water and I have to say lucky it poured with rain in the Melbourne Catchments!  In your cuppa you can taste the chlorine, I wasn't game enough to try drinking it straight.  In the shower it lathered up but the soapy water became very slippery on the base (I found that very strange!) so this morning we went to where the desalination plant is and I expected a big boiling kettle ... I was pleasantly surprised there wasn't one! 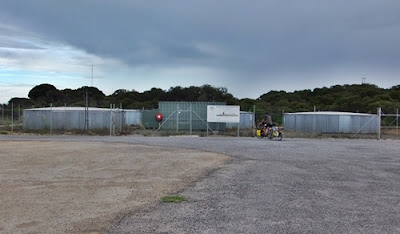 all it is is a couple of tanks and a shed!  I think the one in Wonthaggi Victoria is a little bigger! 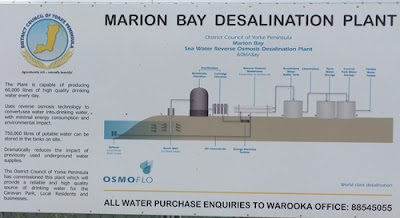 The road curves north up to Corny Point and it is a very quiet road, for the first 16km on 2 cars passed us and after that maybe a total of 20 all day ... so with the traffic flow being so low I think it was a waste of time sealing this road!
It started of very cloudy and we could see rain around us but we had very little just a few spots here and there.  Most of the time we missed the heavy showers as the road ahead was wet but we fortunately got none.
We had a head wind today and the road is very rolling, not hard but coupled with the wind and poor road surface it sort of slowed you down a bit.  Plenty of grain growing and Neil jumped the fence to pick this grain and would like you all to guess what it is? 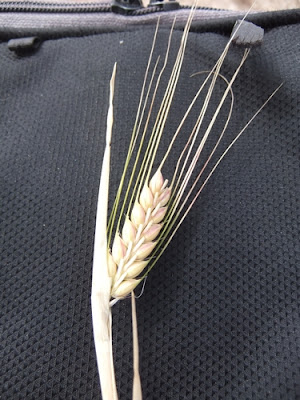 ﻿
I think Neil needs to 'get a life' if he is telling me to get people to 'guess' what type of grain this is on the blog!  But I will guess that it is wheat.
About half way to Corny Point we come very close to the coast but do not see it at all except for a very quick snippet if you happen to be glancing left between 2 shrubs.  But we can see the sand dunes along Fromby Bay ... 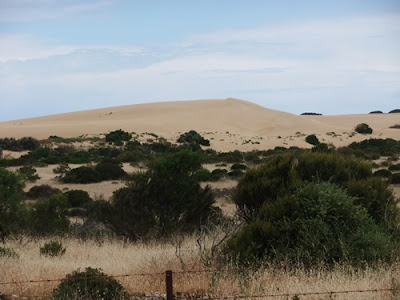 One thing we have noticed with South Australia is they can be a little out with their distance between towns signs and today we were totally confused ... theoretically we should come to a very sharp right turn at Dunn Point and then a few kms east to Corny Point ... Instead we get a 'welcome to Corny Point' sign at the right hand turn and a caravan park sign ... so we think okay we are correct with the distance from the Marion Bay sign but not with the sign that is 5km back that said Corny Point is 8km away.  So we both think that we are in Corny Point and so we ride along pass the houses and general store and still no sign of the caravan park,  we pull over to discuss things as we couldn't both have missed the caravan park, but I saw a public toilet sign that said 2.2km so I guessed that was were Corny Point is and on par with the '8km' sign ... so we ride along and I was right, although it was a stressful 2km - I think the welcome sign was meant to be for Dunn Point!  yep sometimes I feel like I am back in Queensland with a whole heap of Bob Catters' LOL
So tomorrow we make for Yorketown and will hopefully pick up supplies in either Warooka or at Yorketown itself ... depends on when we get therei one closes 12.30pm and the other at 2pm.﻿
﻿
Posted by Janet O'Brien at 3:00 PM