Werribee South to "we are GEELONG the greatest team of all ..." 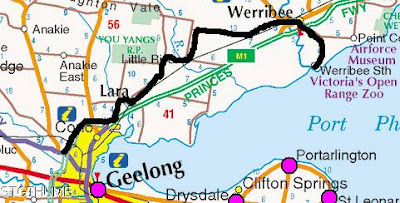 Man it was hot today ... I sure wish I was under Koutas' shade cloth and he was pedalling!
Not exactly an early start this morning ... we seemed to have forgotten how to pack things - never mind I am sure we will be quicker tomorrow! So we left around 8.30am I think and by then the temperature was climbing. I am not too sure on the actual temperature as there is a strong wind and so that would lower the temp a bit I think. It started out as an easterly wind which assisted us to Little River, but it was a strong cross wind when ever the road headed south and since we zig zagged our way from Werribee to Geelong we actually had a mixed bag with regard to the wind.
But one thing is for sure from Werribee to Little River the flies began to pester, they crawl along your forehead to the corner of your eyes and mouth and one even ventured up my nose! This time round we have bought a fly net along and I just had to put it on and over my helmet. Now I have never used one of these and no matter how dorky they actually look on someone they are quite functionally sufficient! they did the job and the flies just sit on the outside of the net. But I did find that it does create a stuffy area under the helmet and I suppose it just takes a little getting use to, but in the headwind it was no good as the net clings to your face and that is just a little bit too much to cope with!
Below is a photo of me with the fly net on over the helmet! 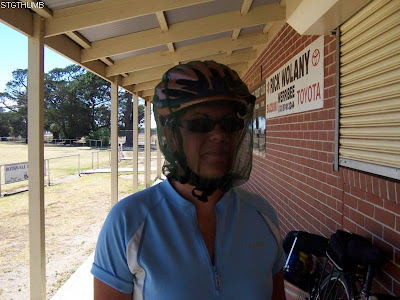 We continued on from Little River which was our first stop and rode on to Lara where we stopped to have lunch. On our way to lara I was hoping to see Cadel Evans out training but alas he was no where to be seen around the You Yangs! The area we cycled is really dry and there is nothing out there not even stock or cattle.
By the time we got to Lara we were both ready to take the cycling shoes off - as practical as they are for cycling (and do an excellent job) they are rather stiff to have your feet in them all the time so we take them off and put on softer sandals and believe me the feet do appreciate that! And I don't think the cycle sandals will soften over time as they are not designed to do that but I assume eventually we will get use to them. 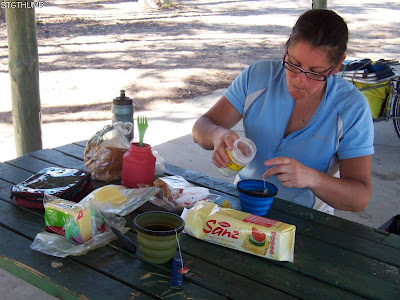 Here is me having a cuppa at Lara and I had to get Neil to take a photo of our foldable cups - they are just fantastic and are so easy to pack ... in fact we found collapsible bowls as well and we have bought one along with us!
From Lara we made out way towards Corio and jumped onto the Ted Wilson Trail which is the new bike path that follows the new freeway that bypasses Geelong - it is a lovely bike path and sure beats trying to battle with suburban traffic. So we jumped off the path at A300 which is the road to Ballarat and came to our campground which has your own ensuite with your camping!
I would prefer the cheaper option of communal toilets and showers rather than the expense of having our own ensuite but alas this is the only campground in Geelong that will take dogs.
No sooner had we set up camp that Neil ducked out and went for a swim in the pool while I stayed and watched Kouta who by now was very hot and tired. 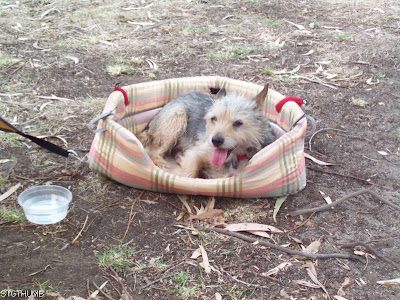 Once he had some food in him he certainly perked up! Once Neil returned from the pool it was my turn for a quick refreshing dip and believe it or not one of the locals at the campground offered Neil 2 cans of beer! one for Neil and one for Me but I don't drink beer so Neil just took the one for himself! What a nice guy to offer us some cool beer (I wish I drink beer as it would have been lovely to have something so cold!) he said that we looked like we wouldn't be carrying anything cold! and he was right about that! 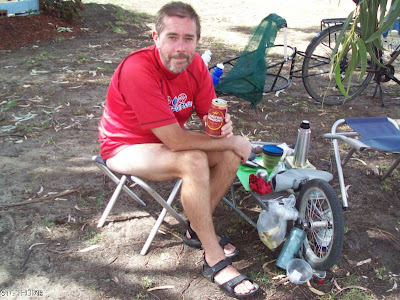 Neil is normally not a beer drinker but he made an exception since it was ice cold!
So tomorrow we head for Winchelsea via the back roads again, not quite sure which way but I think we will be approaching it from the North and go via Inverleigh - must jump onto google to find a route to take!
Just heard the news about Matthew Stokes from Geelong Football Club! what an idiot!
Posted by Janet O'Brien at 5:25 PM