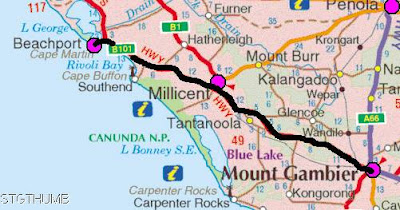 Mt Gambier - Beachport = 90km
Cummulative total = 611km
Yesterday while I was doing the blog I accidently deleted a few of the photos from the Sinkhole and the photos that are in the last blog posting don't really capture the true effect of the garden in the sink hole so I have added more below. The photo below was taken from the rim of the sinkhole so you are looking down into it. 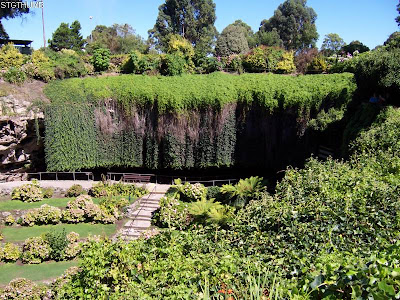 Again the photo below you are still on the rim and this time you can see the limestone wall and how it has eroded to create a huge hole in the ground. 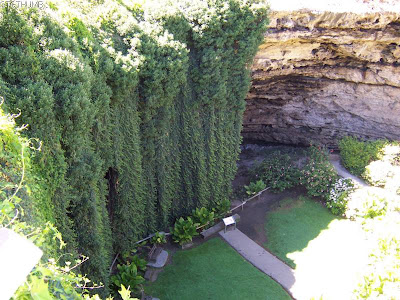 And this one is taken from the bottom of the hole looking up towards the rim. 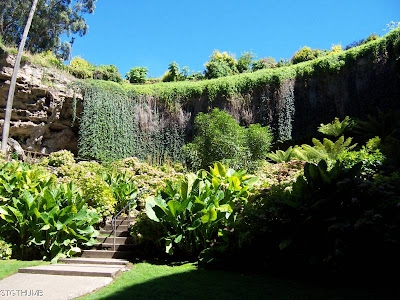 It's a fabulous place!
Anyway onto today ... well we had quite a strong tailwind today so we decided to combine 2 days cycling and do it in 1 day!
We hadn't planned on doing it this way, intially it was going to be to Millicent today (55km) and an easy day tomorrow to Beachport (36km), however once on the road the wind was directly behind us. We ended up taking the B1 road to Millicent which again went through logging country but the road was really weird - firstly, they had major road works on the edge of Mt Gambier and that stopped traffic for quite a while so further up the road the traffic overtaking us was in groups (good for us!!!). Secondly, the road carried alot of logging trucks so the road itself was made to cope with the heavy loads and the lanes were wider than normal (maybe due to the big trucks). Thirdly, the road surface was sometimes rough and then sometimes smooth and so was the shoulder - sometimes it was soooooo smooth while the road was rough and vice versa! Fourthly, sometimes the shoulder was there, sometimes it wasn't and sometimes it was wider than the actual lane itself!!! So it definitely was a mixed bag today.
The road through to Millicent was scenic in itself with pine forests of varying sizes everywhere and the road wasn't overly undulating, it was just right!. Just before Millicent we saw a wood chipping factory and I made Neil take a photo of it! 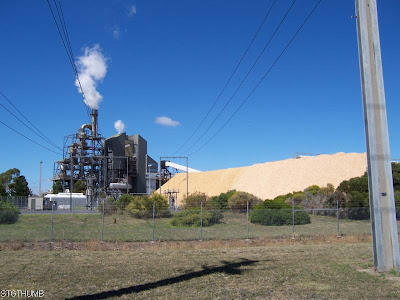 A little further down the road there was a Kimberly Clarke sign which is the toilet paper people so we think those woodchips in the above photo will soon become our toilet paper!!!!!
By now the pine forests were gone and in the photo below if you strain your eyes at the end of the road you can see white poles which are actually wind turbines which stretch to the left of the photo and go for miles just like the ones at Yambuk. 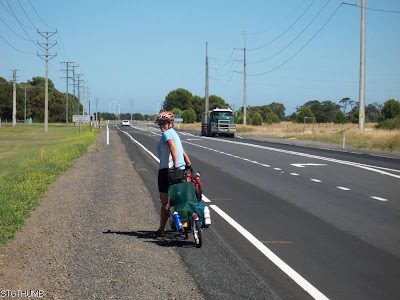 At this point we were feeling quite good and the legs were feeling strong so we got to Millicent and decided that we should make for Beachport and then that will give us an extra day up our sleeves when we come back to Melbourne as I think we will be having head winds all the way back and so we may need an extra rest day!
The B101 road to Beachport is flat and goes through farmland and marshland. At times the wind was slightly to the side of us and it was so strong that it would blow me over into the line of cars! lucky there wasn't much traffic around. Generally we cruised along at 20 - 22km per hour which is pretty good going albeit wind assisted!
In the last 10km the legs began to feel it and tighten up but they made it! Beachport is not as big as what we thought it would be but it has a small general store for us to get our dinner each night. There are 2 caravan parks and the first one as you get into town is on the beach and the wind is blowing and there looks to be not much shelter from the excessive wind chill. So we found the 2nd park which is sheltered alot more from the beach. It is a Millicent Council one and it is huge and all sights are powered. It has a camp kitchen and BBQ areas. It is not full but there are groups of caravaners and at the moment Neil is chatting to 2 couples that are opposite us. It is a dog friendly park and everyone is friendly.
Neil said there is a salt lake back on the main road that is meant to be good to swim in so maybe we might go there tomorrow!
Posted by Janet O'Brien at 8:23 PM