Well not alot is happening to us on our travels so far - no snakes (not that I wish for any!) no wildlife, no dramas, no worries and no power to do this blog so hopefully I will get this all up by the time the battery runs flat!
I woke nice and early this morning and didn't realise that at 6am it is quite dark still. I did take this photo from our tent of the sunrise that I watched and unfortunately I don't have a great camera so the colours of the beautiful sunrise didn't come out in the photo itself. But it was definitely a beauty though! 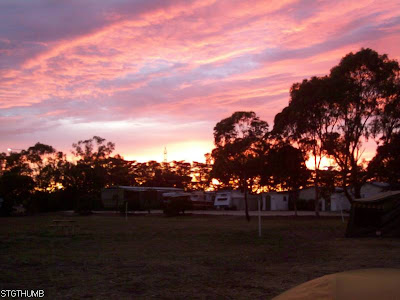 Our day began with an awful ride up Midland highway to the turnoff for Bannockburn - the highway was busy and noisy although we did have a shoulder and albeit rough and full of crap it still got us to where we wanted to go to. So we where on the highway for around12km and we had a little stop at Bannockburn then we took a very lovely and quiet road until we hit the Hamilton Highway (not as bad as the midland highway) and then onto Inverleigh. We got to Inverleigh around 11am and had a cup of tea - this trip we have bought along a 500ml thermos so we can have cups of tea mid morning! It is great having it! Below is a photo of the rest area at Inverleigh - the table was made out of a local tree and was a very ornate looking picnic table and so were the seats to go with it! 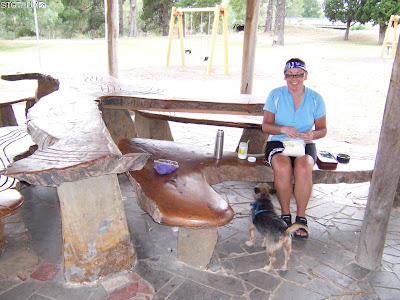 We then took the C145 south of Inverleigh and that was a quiet road with supposedly only local traffic but someone forgot to tell the dickhead truck driver from Wettenhells (spelling?) that his double semi trailer is not suited to 'C' roads so stick to the damn highway!!! Now that I have got that out of my system!! So the road is a combination of single lane and double lane road. Shortly after Inverleigh we crossed the might Barwon river and Neil stopped to take a photo of it and I stopped to take a photo of Neil on the bridge (taking a photo!!!) 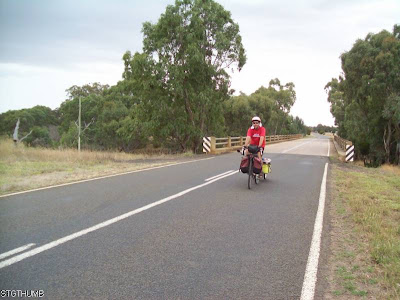 While waiting for Neil I decided to take a photo of Kouta in his trailer - you will see his sunshade is held to the frame by large bull clips and are secured at the other end by being tucked under a ocky cord that holds the tent in the trailer. 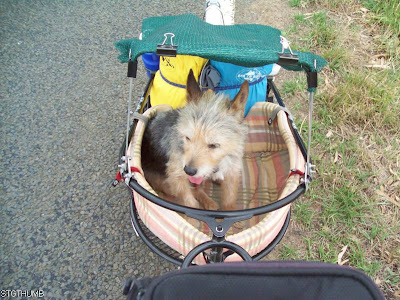 I think Kouta looks really comfortable in the trailer but after 2000km previous he still won't lie down while I am cycling. 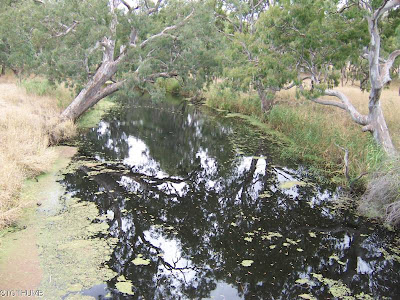 This is the mighty Barwon River - not too sure what the green stuff is on top - alot of the damns that had water in them also had the green stuff on top, I don't think it is algae, maybe a plant that likes warm water!
We got to Winchelsea a little after 12.30pm and before we got there we knew that the afternoon was going to bring rain and you could see in the distant as we were cycling that rain was coming so after warning Neil that as soon as we get there we will set up the tent and then he can chat to whoever as Neil has a tendancy to chat as soon as we get there and we have been caught before and it poured with rain in the middle of putting up the tent - so this time I had to remind him that we don't want to get caught in the rain again ... do you think he listened? well we JUST got the tent up and the fly on when it just poured with rain!!!
Winchelsea caravan park is very basic - no cooking facilities or kitchen just the showers and toilets but it is cheap and most importantly it is clean. To look at the caravan park (which is small) you would turn your nose up at it but believe me this is our 3rd time here it is a nice clean and quiet park (despite being on the main highway) and the Jeff who greets you as you arrive is the most friendliest person! (of course Neil just has to chat too!!!) and he was lovely enough to cook his dog 'Fred' his dinner this afternoon and he even put some aside for Kouta and boy did Kouta love that (I will put photos of Kouta devouring his warm meal up tomorrow).
Tomorrow is camp Colac - woo hoo!!!
Posted by Janet O'Brien at 3:08 PM