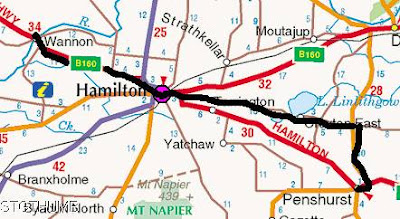 We had a late start today as we (namely Neil) slept in!
Last night before it got dark we went back down the hill to see Wannon Falls and assumed at this time of the year there would be now water falling and I was right. Then I began to wonder just when was the last time this place actually saw water falling from the falls? I thin Victoria needs to rethink how it names places - why name it Wannon Falls when most of the time there is not water falling? Another example of this is we passed 2 lakes today neither with water and it looked like there hadn't been water in the lakes for some time! So to avoid some disheartened tourists rocking up and expecting water to fall at falls and water to be in lakes maybe they shoud rename tourist spots to avoid tourist disappointment!
In saying that, the area around the falls is lovely and there is water in the Wannon River but it is not flowing. 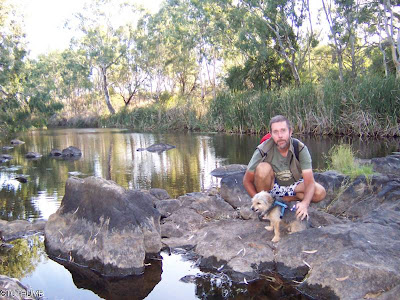 When we took this photo Kouta thought as he was being picked up that he was going to be put in the river for a wash!
Wannon Falls has a small camping area - it is a 'tick' in the camp 5 book and is highly regarded as an excellent free camping spot. Below is a photo of our camping spot - we were the only tenters, 2 were in swags and around 4 other caravans were there. 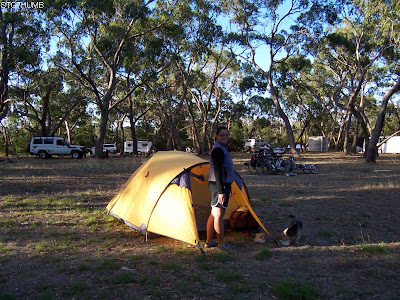 There is a shelter with camp oven type things, 2 big tables under shelter and 2 out in the open, there are environmental toilets and tank water (that was a little brown for our liking leaves must have got into it!). Wannon is less than a km away to pick up fresh water from the CFA rain water tanks, which is what we did!
There were alot of possums at night so Kouta had to be escourted out of the tent if he wanted to pee or else he would have just taken off chasing possums!
Like I said we started very late this morning and really we need to get our act together as we are getting alot of headwinds and we need to get an hour or so in before the wind picks up, so Neil is in for a surprise tomorrow morning!
We rode the Glenelg Highway (18km) to Hamilton which was up and down. We picked up food supplies knowing that Penshurst is not a big town (pop 435). However we tended to poodle around in Hamilton doing absolutely nothing that we didn't leave there until just on 12 oclock and we still had 38km to go to Penshurst and into a headwind!
Between Hamilton and Penshurst we took a small road that is between the Glenelg hwy and the Hamilton hwy. The road was undulating at the start but then flattened out to open farm land and exposure to some very tough headwinds.
I forgot to mention the photo below - it was taken as we came into Hamilton - we saw the tourist sign and it said 'big wool bales' and we both thought maybe it might be some giant sheep wool bales but instead it was these buildings that 'look' like wool bales. 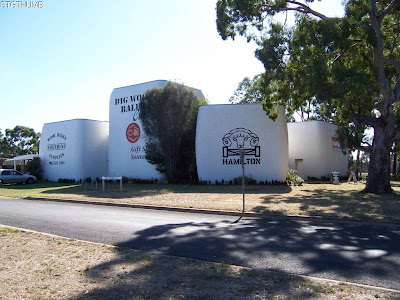 We were extremely disappointed that it was something like the giant pineapple, or lobster, or something like that!
Anyway after a long agonisingly slow day to get here to Penshurst we were over it! And to top it all off when we got here to the caravan park I hadn't unclipped my left foot and only my right and I fell as I stopped thinking that the bike would go right with the right foot already unclipped - no it decided to fall to the left where the foot wasn't unclipped and whooooopsie over I go! I have a graze on my knee and a bruised ego!!! I did the same yesterday - I was starting out after a break and the driveway was a little too steep for the gears I was in and I wasn't getting enough speed to change and I was slowing down and I didn't get my feet unclipped ... and over I went this time I landed on grass thank god!!! So Neil and I are keeping a tally called "SPD FALLS" where the SPD is the name of the pedals that clip the shoes in!
So the caravan here at Penshurst is nice - very basic and is a council one where you get the key to the amenities at the post office! It is costing us $9 to camp tonight ... bargain! It has clean toilets and showers and the washing machine is free - so we have done some machine washing rather than handwashing which is what we do nearly every day!
We are still not far from the Grampians and we can see them between the acorn trees and we are not far from the lovely Dunkeld.
Behind us is Mt Rouse and the town is at the base of it. Tomorrow we will be taking the Hamilton Highway to Mortlake and I will try to wake early so we can start before the wind!
Posted by Janet O'Brien at 5:22 PM