Casterton - Wannon Falls = 57km
Cummulative total = 822km
OMG what a day it has been! Stupid Janet was looking at the map again and decided to go through some damn hilly country (my excuse is that it "looked" flat on the map!!!)
But first, while we were at Casterton having a rest day there yesterday I went food shopping and saw a "black and gold" light fruit cake (my all time favourite cake) and couldn't resist buying it so you will see from the photo below they utter joy on my face when cutting the cake! 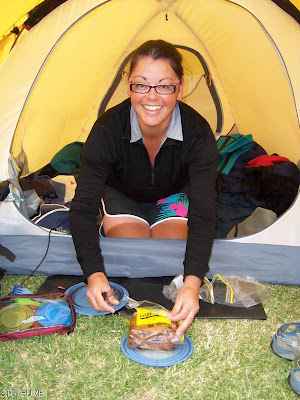 And no mum I am not wearing white shorts that is my tan line! I have to say this - my mother thought the photo of Neil in the pine forest bushcamp on the Millicent-Penola-Casterton page - she thought Neil was wearing a 'white' shirt and was surprised when we told her that no it was his body and it is the sun that has caused the brown arms and his body is normally that white!
On to today - I put my foot down and refused to take the shorter option of getting here to Wannon Falls via the Glenelg Highway ... well let me tell you I should have kept my mouth shut and followed Neil!
We took the C195 to Merino and then C 196 to Coleraine which were nice but hilly but it was very scenic in fact absolutely beautiful when cycling, so the hills weren't too bad and we did have a headwind all day. We turned of at a road called Winninburn and that is when it all started! 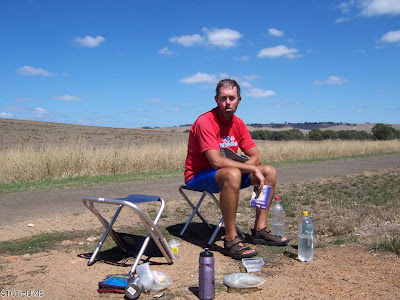 As you can see from the photo above Neil is taking the piss out of me and sulking like I did on the hot northerly wind day that we had a few days ago. 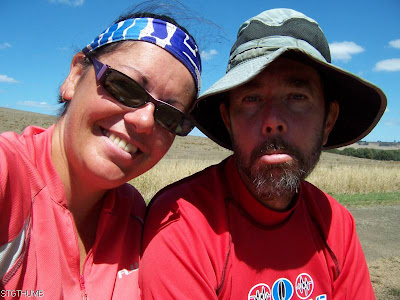 And he is still sulking because I choose this scenic but damn hilly route today!
This quiet road has moss growing on it so you can imagine that there is hardly any traffic on it. All we had was a few local cars pass us. But the steepness of the hills was unbelievable! I tell you it was almost as bad as Mt Hotham! Most of the climbs were short (around 1/2km at most) but some of the hill was around the 10-12% grade. Look at the agony on my face at the photo below! 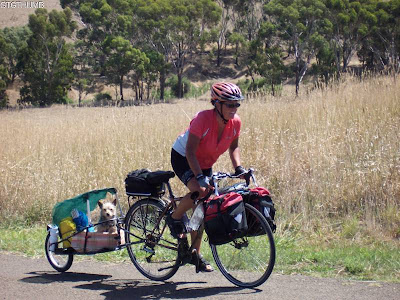 I had to get out of the saddle quite a bit and sometimes I was leaning so far forward that I could inspect the condition of my front tyre!!! If you look closely Kouta is quite at home when I cruise at 4km per hour up the hills! One of the hills I just refused to ride and thought I could walk up the road quicker so I did and believe it or not I managed to walk up the hill pushing the bike at the same rate at which I would have ridden the bike! 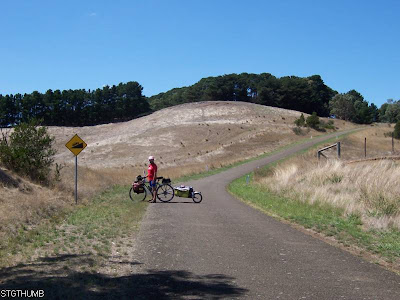 I would say there was around 3 major hills to climb and most were in sections and not just 1 complete hill. But Neil didn't mind the climbs he found them hard but could ride them all. 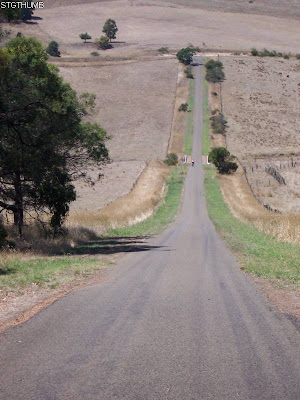 But some of the down hills were fantastic (see photo above) and they were just as steep as climbing them.
At least along these quiet roads once you got to the top you tended to ride along a plateau and the views were sensational. So you could say that it is probably our most scenic ride so far but also our hardest one!
Just before we got to Wannon Falls and before we dropped down to the Wannon River we managed to get a good view of the Grampians and in the photo below you can see Mt Abrupt on the left and Mt Sturgeon on the right. 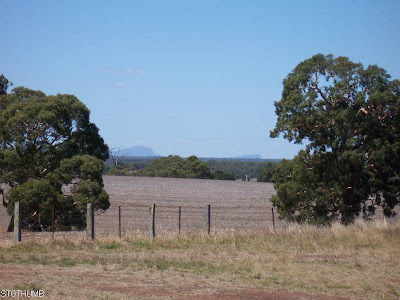 Right now Neil is looking at the map and I told him that I would ride the Glenelg Hwy but he has just informed me that we can take a back road ... now I am not sure if he is still taking the piss out of me when he says that .. you know Neil!
So tomorrow we head for Penshurst and I think it is a short day (if we take the Glenelg Hwy!) but who knows how far when we take the back roads!
Posted by Janet O'Brien at 4:45 PM