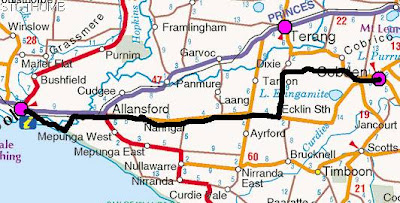 It was lovely riding today - slight tailwind except for the last 10km. We have ridden this route before but we did do one part different and that was to get to Ecklin South we took the road to Terang out of Cobden and then a small road and approached Ecklin South from the north - it is a nice quiet road and then we joined the C167 to Warrnambool - now despite this road being a "c" road it is really a busy 'A' road! we were overtaken by milk carrying trucks going to either Warrnambool cheese and butter or Fonterra factories and if it wasn't those trucks it was those damn Wettenhalls' trucks but all in all they were very courteous to us and the road was pleasant to ride.
We turned at Allansford and took the scenic road that took us to Warrnambool and the road was quiet and a bit up and down and the down is just before Hopkins River which is where we had a lovely swim in the estuary there and the water was so warm. We also unpacked the trangia and boiled up the water for a cuppa and while we were there there was a sea mist rolling in. This caused the sky to go very grey and to look at the photo you would think that it was going to rain. There was a cool breeze that came with it but if you were sheltered from the breeze the temperature was still the same - hot! 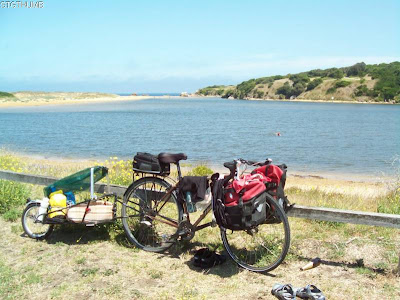 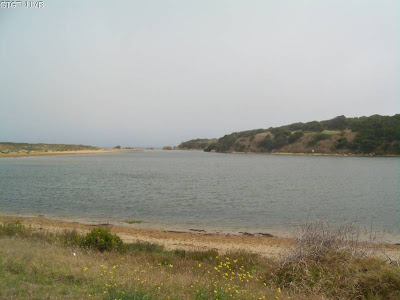 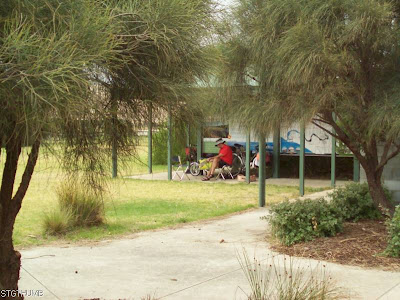 Here is Neil relaxing at Hopkins River.
From here we decided to go along Logan Beach Road to the Whale watching platform not that we thought we could see any whales but there is the slimmist of chances! but we saw known as the main season is between May and October. But as you can see from the photo below you can still see the sea mist rolling in. It was really thick as you couldn't see the coast or the town of Warrnambool. 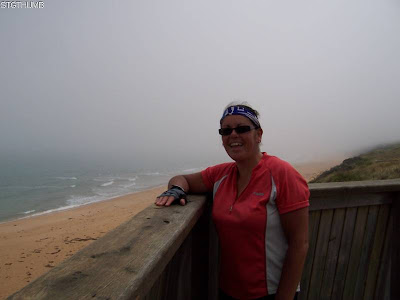 After this we decided to go to Neils cousins (Heather and Anthony) place where we will spend a rest day here. Last time we came here Neil controlled the map and we got lost this time I had the map and decided to take an easier route (and also alot less hillier route as Warrnambool is built on a few short sharp hills!) As we were cycling along I could feel Neil doubting my skills at reading and following a map - but in the end we got here and to Neils delight it was far more easier than his chosen route!
So here we are, Heather and Anthony have a little dog called Sooty so Kouta has some company but Heather is very strict about dogs in the house ... in fact dogs are not allowed in the house!!! (Editors note - apparently Heather is allergic to dogs so that is why dogs are not allowed in the house!) So Kouta will have to put up with it at the moment, he seems quite content with it and loves to follow little Sooty around!
Tomorrow is a rest day and we will stock up on food and look into the rail trail to Port Fairy from here.
Posted by Janet O'Brien at 5:57 PM