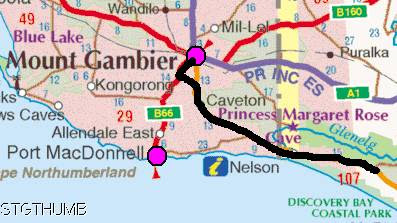 Well here we are at Mt Gambier the unofficial "Bogan Capital" of Australia!
I didn't get too much sleep last night - must have eaten something bad and I had a sore tummy and I suppose to get a sore tummy in a bush camp is not really ideal but I managed. I tell you it was really DARK out there when there is no peripheral light, in fact it was scary as even the sky is covered from you due to the density of the pine trees!
Nevertheless we woke to another grey day but there was a hint of blue at times. It was a nice ride to Nelson much like yesterday. What surprised me was that there wasn't a lot of trucks and of those that passed us they were very courteous and gave a plenty of room or gave us a little toot - I presume the 'toot' means "by their judgement with on coming traffic they can't move over too far so it is better that you guys do"!!!
We got to Nelson 15km down the road and that is a cold windy spot when a southerly is blowing, you definitely need your thermals there, so we didn't stop long and just 4km later we crossed over into South Australia. 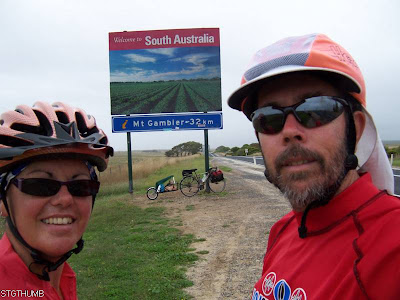 And straight away you notice a change in the roads with regards to shoulders ... there is none! If a truck coming both ways happened upon you you basically had no choice but to get off the road! But luckily that didn't really happen. Fortunate for us we had a tail wind in our favour, although the roads were undulating, the wind wasn't quite enough to blow us up the small rises so we still had to manipulate the gears to get up the damn things. But it was nice riding along there and still it was grey skies and almost threatening to rain!
The strange thing about SA is that there is no signage for anything really and if there was they didn't really give you enough warning ... I mean going into Mt Gambier you had no idea how far it was to go until you arrived there! Even campgrounds all they gave you was a few hundred meters warning and not "pine country campground" 3km this way!!! Bizarre! but one sign we did see (no warning though so we had to back track!) and that was for "free onions" so we grabbed some (not much left though) for tonights and tomorrows dinner.
So we got to our campground at the base of the hill to the blue lake. Had some lunch and then rode into town to Woolworths which was 4.4km away - basically up and over the hill! Now going up the hill the lane was very narrow and so cars couldn't really overtake but going down the hill in another street the road was 4 cars wide!!! Bizarre this place is!
Anyway I was warned that Mt Gambier was Australias 'Bogan Capital' and after Neils debarkle in Portland Woolworths with the orange stickers and bakery dept I decided that I would go into the supermarket to only get what we need! As soon as the door opened there were 2 bogan females! but wait there are more of them ... they are everywhere! ... they really are bogans! heaps driving around in their cars .... in fact the cars are full of them! Of course they are completely harmless but I could not believe that some many congregated in one town!!!
I got our necessitites and on our way home we stopped of at Blue Lake Lookout. I could not believe just how blue this water is! 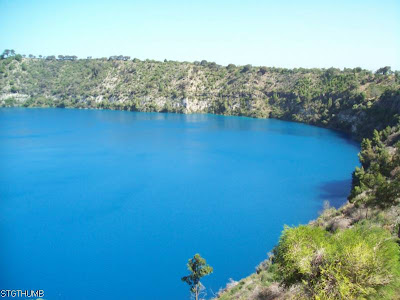 It was also very windy around the rim so poor koutas' hair is a little messed up in the photo below. 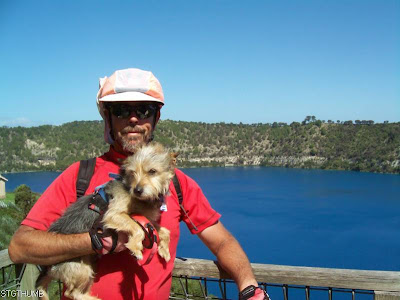 I don't think my photos do the colour blue justice - I mean it is a real aqua blue and so beautiful. Once winter hits the water goes back to a greyish colour apparently but changes colour over the summer months. Tomorrow we will go see the other lake.
the campground is nice and the unpowered site is huge and has plenty of shade which is just as well as the grey skies broke and it was a lovely clear blue afternoon. The campgruond is not crowded and the facilities are good with very clean showers and toilets.
I forgot to mention that Mt Gambier is quite hilly hence its name!
Posted by Janet O'Brien at 7:45 PM