Millicent to Penola to Casterton

Again this is a delayed blog due to no service where we are. So I have left until we have arrived here at Casterton. We woke nice and early Saturday morning mainly due to the fact that we both didn't get much sleep due to a couple of dogs across the road continually barking throughout the night. But it was good to get up early as it was forecasted to be a hot day. And we couldn't exactly have our breakfast in the kitchen as that didn't open until 8am and by that point we were well and truly packed up and getting ready to leave.
We began with a solid headwind and within 5km I had had enough of it!!! One thing I can’t handle is Headwinds - I don’t know what it is but just a full on headwind really annoys me! I suppose it is the fact that I am petrified of running out of energy by the time I get to my destination. But after a while we decided to take turns at being at the front as it was beginning to get too much for me. Kouta was okay and didn’t throw himself around as much ... just so long as he can see Neil he is okay. The road to Penola was varied - anything from open farmland, pine forests, hills (mt Burr) and gum forests. Eventually the wind moved more westerly and the road swung round towards the east more and so the wind became more of a cross head wind so it was easier to ride side by side. It was a nice road and there was hardly any traffic.
During our cup of tea break Neil just had to take photos of what Kouta and I looked like! 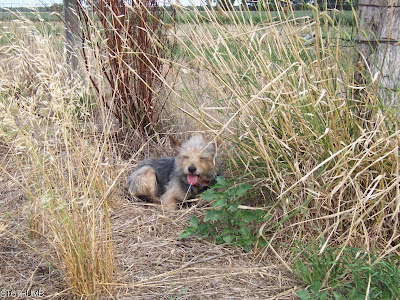 Little Kouta trying to find a cool spot - it wasn't sunny or anything just a very hot wind! Whereas I was just 'over it'!!!
It began to heat up and the wind was really strong and continually kept pushing me out towards the middle of the road so by the time we got to Penola we were buggered. We found the campground on the edge of town and it was full. We didn't really think about that it is coming up or it actually is grape picking season. However the caretaker/owner was very rude and abrupt to Neil which was completely uncalled for and so as we were riding into town to find the information center I was quietly thinking about what I was going to write about on this blog about the caravan park!
So once in the information center we had 3 options: 1. $125 basic cottage (takes dog) 2. $135 accomodation (also takes dog) or 3. Bushcamp in a pine forest 10km west of penola. Which one do you think we took? 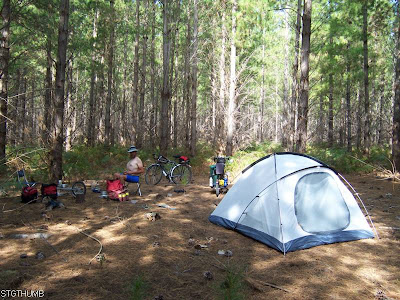 As you can see we took the $125 basic cottage option!!!
Nah this is the bushcamp in the pine forest west of Penola. Since the road to Casterton runs in a westerly direction we had a tailwind so that was pretty lucky and it also took 10km off tomorrows ride. But before we got here we took a nice long break in the local park and had 2L of nice cool guava and apple juice and a sally lun which was very refreshing since it was so hot by now it was around 38 degrees. We filled up with water and cycled here to the campspot and loved it instantly - a degree or two cooler in amongst the pines. Much better than that rat infested, crowded, feral, disease ridden, poxy campground back in Penola. You know while we were in the park Penola looks like a really nice town, fully of knick knacky boutique shops and the other accomodation in B&B etc look really nice, albeit expensive! So I think Penola gets the thumbs up but just avoid the awful campground. On one of the campground guides we use I did read a not so good review about it and now we have encountered the rude prick of an owner I think yeah I wouldn't recommend this campground to anyone!
So Neil has broken a spoke in his rear wheel and tomorrow he will take Kouta and tent (light load) and I will take the luggage (the heavier load) ... lets see how he goes with Koutas constant moving!

Man I am over this computer, all afternoon I have been trying to copy and paste onto this blog but it is not allowing me to paste directly onto here and I can't understand why - sometimes it lets me do it and sometimes it does!!! grrrrrrr!
Anyway the ride here to Casterton was lovely - such a quiet road the C198. We hardly had any cars until around 10.30am and even then it wasn't that many.
So again we started nice and early and like I said today I had the heavier trailer and Neil had to take a photo of me coming out of the pine forests struggling through soft sand! 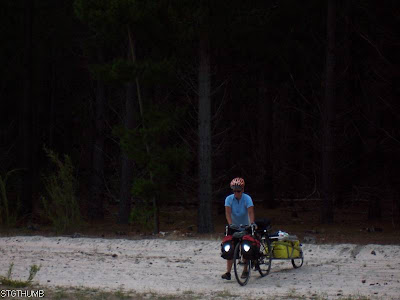 Actually it wasn't that bad once you got your momentum going you didn't really notice the heavier weight but what I did notice was the fact that the baggage didn't move! Which is one thing Neil commented on straight away (Koutas movement and how it affects your steering of the bike) and it took kouta around 30mins to settle down. But he was good for the rest of the ride except for when he needed to get out and go for a 'dump' and he starts to move ... alot!!!
Around 10km up the road we came to the SA/Vic border. 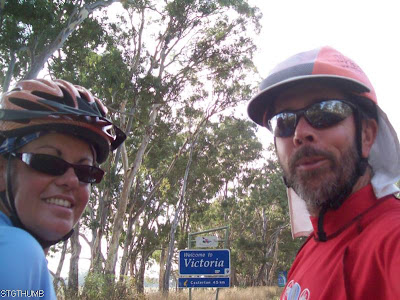 Ah it is great to be back in Victoria - on normal time and with normal drivers (hopefully!)
Since Neil was in front he set the pace and he rides a little faster than me and at times I struggled to keep up! There was hardly any wind and the road was flat so he sat on around 19-20km per hour which is quite a rate to maintain over 3 hours. During the last 12km we slowed down a bit as the road became a little more hillier. 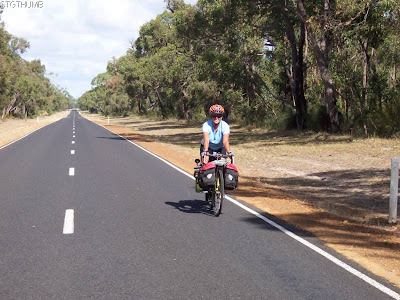 At this point we were surrounded by State forest which was full of gum trees and snakes I suppose (not good camping spots!) and this led us into Casterton around lunchtime. Just before we got into town Neil took a photo of this Mary Mackillop sign which pops up alot around this area especially Penola (it is a pity the Penola campground owner/caretaker didn't take a leaf out of Mary MacKillops book and show a little compassion for 2 weary cyclists ... no instead he had to be a right little sod!!!) 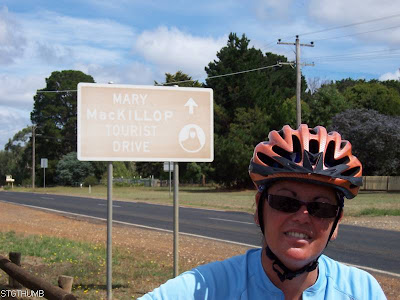 I am sure that if you enlarge this photo of me you can see all the dirt and grit on my face since I haven't had a shower for 2 days and since both days were stinking hot I think Neil, Kouta and I really were a bit on the nose!!! In fact I hadn't shaved my legs for 4 days and you could say I was looking like an oversized echidna!!!
Anyway we are resting here tomorrow and the campground at Casterton is in amongst the local rec grounds, pool, bowls club etc but it is nice and quiet (hopefully!) and a caretaker will be along shortly to collect the fees. We have decided to go for a powered site ($3 extra) so we can use the computer at the tent and watch "Madmen" rather than have to go over to the pokey little laundry that is hot!
Oh when we got here Neil points out to a shop that sells everything ... including craft things oh I am off for a looksie tomorrow ... can't buy anything but I can look!
Posted by Janet O'Brien at 1:59 PM