Woo hoo smell the country air! For a city girl like myself I have to say I am now an expert at historical country machinary!!! I have seen machines and tractors that are just soooooo old it is not funny!
Today Neils parents took us to the Colac Heritage Festival at the showgrounds and I think EVERY man over 60 was there reminicsing (spelling?) about the "good ole days". Even Ray could state that he had used some of the machinery. But the highlight for me was seeing my very first 'tractor pulling' competition and I must admit I did have a few favourites that I secretly hoped would win and that was purely based on the colour of the tractor! 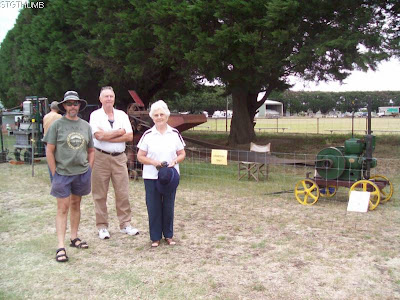 Behind Neil and his parents is an Onion seeding machine - it is a rather large machine and somehow I can't quite see it being used, but I am sure it helped out some onion grower in the district. 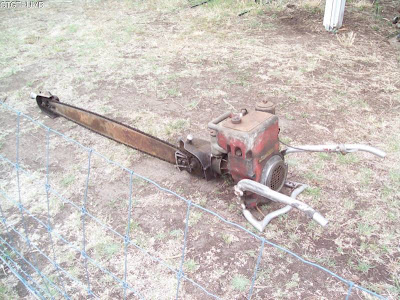 Imagine swinging and carrying this chainsaw around with you! Even Flo recognised this and I am sure Ray used one when he worked at the Mill. 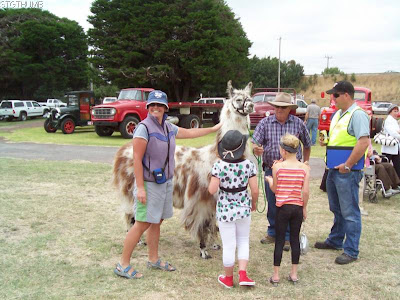 This was one laid back Llama and it was quite use to human contact and I had never patted one before but its' hair/fur is just so soft but when you touch something that is knitted with Llama wool it seems to be a little coarse ... so I am not quite sure what happens to the hair/fur when you spin it into wool to knit. 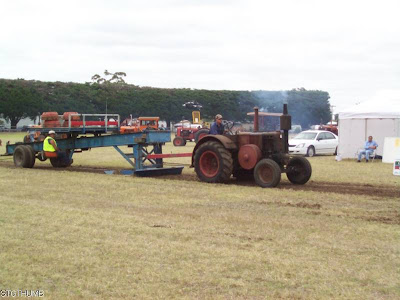 One of the many tractors involved in the tractor pulling competition. Basically it tows the weight on the blue frame thingy and as it pulls it forward the weights start at the back and are moved forward and that pushes the platform at the front that is being dragged along the ground and as the weights move forward more that creates more resistance from the platform and so the tractor has to work harder ... basically the more powerful the tractor the more it can cope with the resistance from the weights ... fascinating! ... you don't get this in the city! 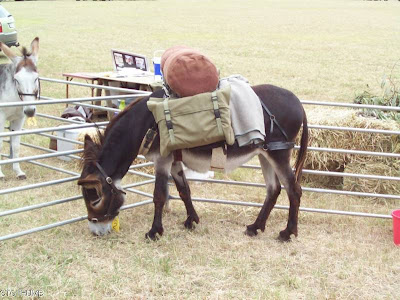 This has got to be my favourite photo of all - a working donkey that probably was used to carry luggage and loads ... just like us on the bike! Do you reckon Kouta would be able to cope if we substituted our bikes for donkeys ... "I don't thinkso Michael!" 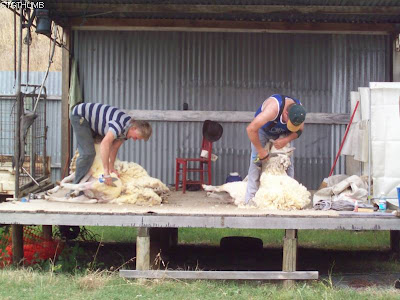 Last but not least - for some strange reason (maybe the fact that I am a Kiwi) but Ray insisted that I see the sheep shearing! Not all Kiwis' can sheep shear! It was not part of our school curriculum! but still it was great to watch and these were shearing with scissors!
Tomorrow we are off to Cobden enroute to Warrnambool.
Posted by Janet O'Brien at 8:37 PM