We are still here at Portland, we decided to stay an extra day. Yesterday we went on a small bike ride around Portland and out to the Aluminium smelter and along the port, however, Neil didn't bring the map along so we didn't really know where we were going! Not only that but we also forgot to put the memory card back into neils camera and so any photos taken of the port and Aluminium place were on the internal memory. Not only that! but we didn't bring the usb cord to transfer those photos to the computer so I can't put them on the blog ... do you think anything else could go wrong? ... well I forgot to bring the memory card from neils camera down here to the laundry and that has the photos from the lighthouse that we took when we did put the memory card back in the camera!!!
Never mind - you can look at the photos that I took this morning as we did the historical town walk - you see I organised this and funny enough I remembered to take a map and memory card in the camera!
Below is my favourity photo so far of Neil and Kouta sitting in some art piece that is on the foreshore. 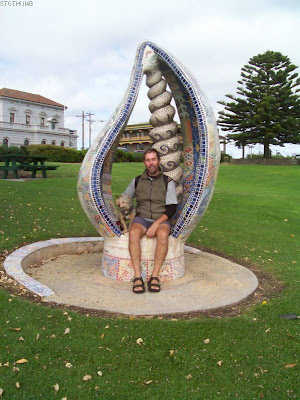 One of the places we walked pass was the church where Mary MacKillop worshipped. 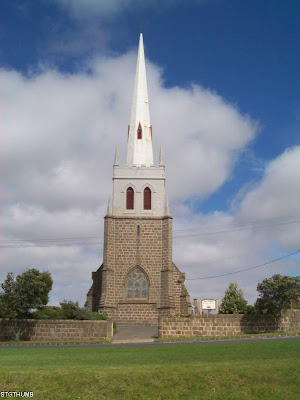 Below is the old post office building on the right and the custom house on the left. 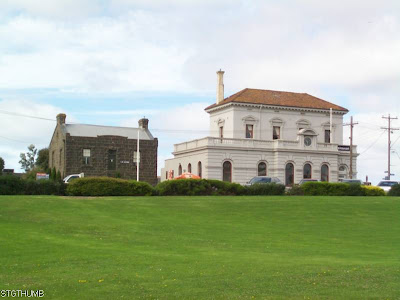 I loved the ornate verandah on the Macs Hotel building - although the railings were put there later. 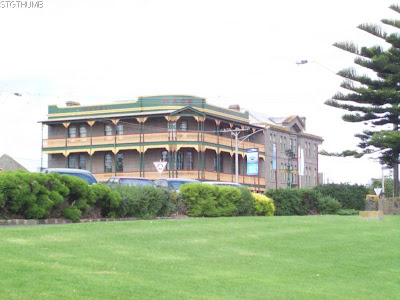 Last but not least the old town hall. 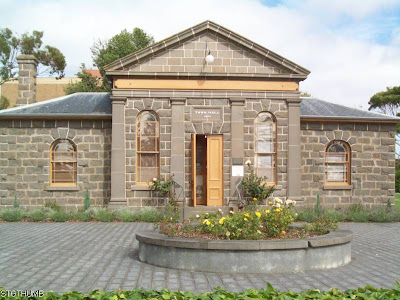 Near enough to lunch Neil and Kouta were just about getting sick of this old blue stone buildings but I like this sort of stuff and love looking at them imagining what it must have been like around here 130 years ago!
Tomorrow is a bush camp unless we get a raging tail wind that will blow us to Nelson which is around 70km away.
At least the rain has gone but it is very windy - in fact it blew all last night. So hopefully it is a tailwind tomorrow.
Posted by Janet O'Brien at 3:20 PM