You are not going to believe this!!!

You are not boing to believe this ... but guess where we are? go on guess? I said guess! (I think I have been watching too much Katherine Tate with Dad over Easter!!!) we are in Baccus Marsh!!! yes way we are in Baccus Marsh we must be nuts or something!
Still in Katherine Tate mode but "those dirty rotten bastards ..." in Healesville would not take tents in the campground yet their website says that there are camping sites available, according to them they only take caravans! so due to that we were unable to leave Melbourne yesterday and head north via the Black Spur and Nabethong! Lucky Neil rang just before we were about to go or else we would have got there and had to turn back! So after much consultation with the map we decided to do the usual ride to Blackburn, pick up the train to Flinders and then another onto Werribee and start cycling north from there. So here we are in Baccus Marsh and I have never been here before and it is a biggish town at the base of the continental divide so the road ahead tomorrow to Daylesford shall be hilly I think!
Anyway it was not an easy ride from Werribee to here albeit flattish until you get to the Geelong-Baccus Marsh Road. We had full on headwinds for the first 24km. The going was slow but not necessarily hard - although Dad did decide that he may not carry on ... he will decide tomorrow morning! ... unfortunately he does not like headwinds or hills (oh and heat) and only enjoys riding in pristine ideallic conditions - namely flat, tailwinds and cool temperatures! We sometimes wonder why he cycle tours - I think our rigid structure of up early and out by 8.30am and ride as much as possible in the morning and try to get to the destination by 1 - 2pm really goes against every cycle touring belief that he has really!!!
The road out of Werribee was very busy and I thought they were all going to Baccus Marsh (must be the place to be!) but I quickly realised that there was alot of new housing development along with a shopping center because as we passed the shopping center there were hardly any cars! lucky because the road condition was crap and there was a shoulder only every now and then.
Once we got to the Geelong - Baccus Marsh road the traffic really picked up but we had a nice shoulder until we got closer to Baccus Marsh and as you go down the first hill over the railway line the shoulder becomes very gravelly and so you either have to slow down or move onto the road - I choose to slow down going down the hill and then the climb opposite was very steep and I was gasping for air at the top! The ride into town from there was okay but once you turn left at the roundabout to get to the campground oh my god was there a hill! I was nearly kissing my front wheel ... and to do that at the end of the day nearly killed me ... Neil even had to ask if I was alright!
So the campground is nice, lots of big buses here and they aren't do it yourself buses ... they are winnebago and brand new ones worth alot of money! So we are, as per usual, the only ones in tents and we have a caravan site as there are really no camping sites here. 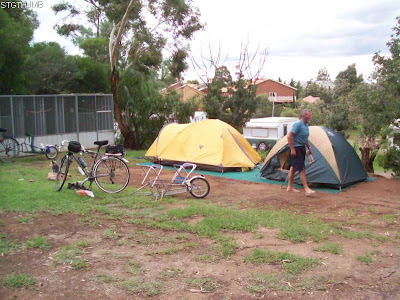 Funny enough though we have an aviary at the end of our site and as soon as kouta was let out of the trailer he runs up to the aviary and looks at the birds ... and he was like that for the next hour! We could walk around and Kouta just ignored us and concentrated on his birds. Take a look at the photo below and Kouta would just sit there and watch intently! 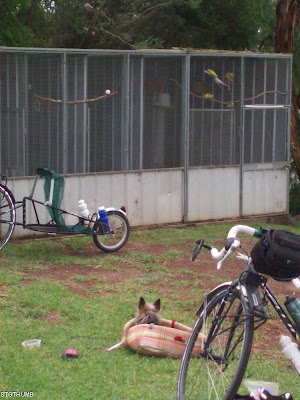 So tomorrow it is off to Daylesford and I am looking forward to seeing this place as I have heard alot about it ... I guess it may be a bit like Beechworth? Hopefully Dad will be okay tomorrow if he comes with us ... I think he will!
Posted by Janet O'Brien at 4:50 PM