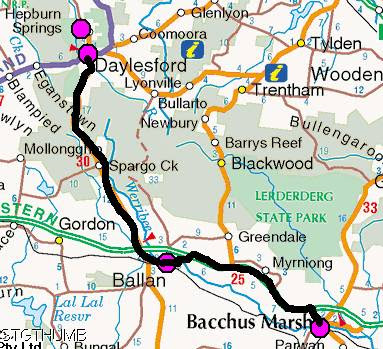 YIPEEEEEEEE we made it to Daylesford! .... just! It was a hard day even Neil thought that the day had A LOT of climbing of hills. Off the 55km - 10km was the down hill into Daylesford, at least 10km of flat and downhills along the way, so that leaves at least 35km of absolute climbing of hills (at least that is what I am guesstimating!) but I think Dad and Neil will agree with me.
So we started out really early this time I am sure it was before 8.30am! we made our way down to the freeway (and I still can't believe that we rode on the freeway but only as a last resort!) and fortunate for us there was no wind, in fact very little wind all day. So as you approach the freeway you can see the first of the hills as it meanders its' way along. It was 9km long but the gradient was easy and the shoulder was very generous and believe it or not relatively clean and free of glass, truck tyres and just general crap! After the first hill you go down a little bit and then start climbing again and then down and then another hill that is slightly steeper so vic roads decided that it was too steep for some cars and made it into a 3 lane freeway and we in the shoulder only had about 1/2m lane!!! Not long after that we turned off to Ballan and bid a found farewell to the noisy freeway - it was damn busy with heaps of trucks and the noise was just relentless.
At Ballan we had a long break and a cuppa before heading off North to Daylesford. The weather was relatively warm and clearish.
The road north to Daylesford was relatively busy and was an okay road, sometimes it had a shoulder and sometimes not, but you could feel it in the pedalling that although the road looked deceptively flat it was in fact gently going up! We decided to break up this section of road into 10km lots and took a break around every 10km.
Here is a photo of Neil turning to look for Dad. 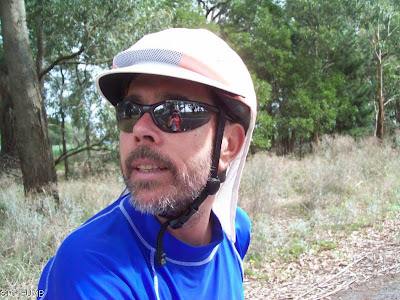 and here is a photo of Dad reaching the top of the first gentle incline! 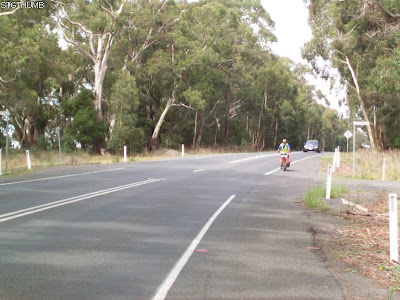 So going along this road was not as bad as what I thought it would be, I thought it would be more undulating and a series of ups and downs but instead it was just a gentle continuous climb with a few hills chucked in to remind you that you are heading for the top of the divide! 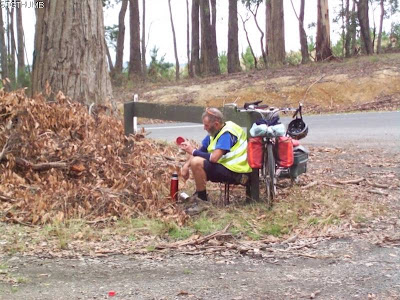 Here is a photo of Dad at our first 10km rest spot, it was at the turnoff for Werribee picnic area, we would have gone to the picnic area but it was 1.2km down an unsealed road and we weren't that inclined to see a river!
So off we head up the road and again you are just climbing and sometimes you get relief from a little down hill but most of the time you are climbing. The weather is starting to get cooler and the clouds have come over. Neil says that because we are sooooooo high that is the reason why it is getting cooler - I'm thinking we aren't that high to have a sudden 10 degree drop in temperature! I am thinking along the lines that a change has come through!
I had to take the photo below of our final 10km rest stop at Leonards Hill ... why you ask? ... well this is the spot where I got bitten by a bull ant! ... I have live here for 13 years and have managed to avoid being bitten by one and here I am sitting on the ground and I feel a very sharp nip on my butt and boy did I jump! 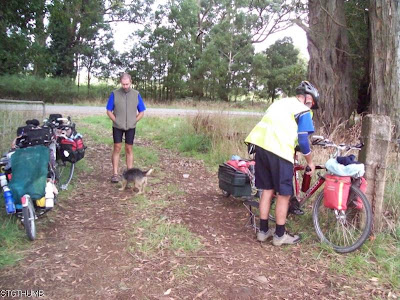 At this point I was telling Dad and Neil that we should be at the top of the dividing range, but I don't think they would believe me as there was only a sign to say "leonards hill" and nothing else like dividing range with a height, I am emphasising that generally we should be going downhill and in the true Australian way for roads of down, up, down to get down. Looking at the map I said that most rivers start from here - the Loddon starts in line with Leonards Hill, the Werribee river started just below and even the Lerderderg river starts in line with Leonards Hill but I still don't think they believed me ... but what do you know ... 25m up the road there is a sign "Leonards Hill 717m" ... now they believed me! 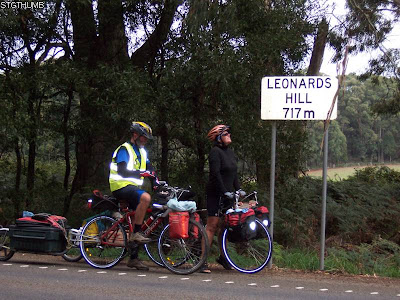 Wooo hooo it was generally 10km down to Daylesford from here. By now it was really cold and the skies were threatening.
But we managed to get to Daylesford at around 2.30pm and managed to set up the tents just before the rain ... and it hasn't stopped raining since! Acutally it has stopped now but there is a mist surrounding the area and I don't think that will move as there is no wind to blow it away. I would say it is around 16 degrees and we are in the camp kitchen and the manager saw us last night outside the tent eating dinner and he mentions the camp kitchen and we just tell him that we have a little dog and he kindly says that they will turn a blind eye to him in the kitchen ... now I thought that was really nice! So here we are in the kitchen keeping dry.
We will stay here today and rest and then head north doing alot shorter days so Dad will find it easier ... sort of forget that he is old and assume that he can still do the distances we do!
We will try to get into town later on this afternoon depending if the dampness hasn't got to us by then!
Posted by Janet O'Brien at 8:17 AM