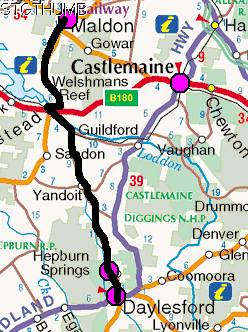 Brrrrrrrrr it is cold up here at night I think tonights low will be around 5 degrees! Last night at Daylesford it wasn't too bad it alternated between raining and wind. But at least the tent was dry in the morning but the wind ... to coin a phrase Neils' mother uses ... it was a LAZY wind and it blew strongly from the west and south west all day and it was cold and we virtually rode most of the journey in our gortex coats ... that is how cold it was! 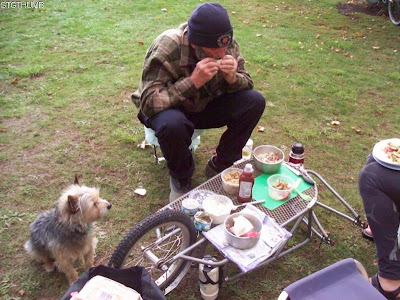 But first take a look at the above photo of dinner last night ... we had it outside the tent and turned the trailer upside down as a table and it is about the height of Kouta ... he could almost "sit" and eat at the table with us!
And this morning we found this toadstall that had popped out of the ground not far from the tent. When you look at it you half expect a smurf to pop out from behind it! 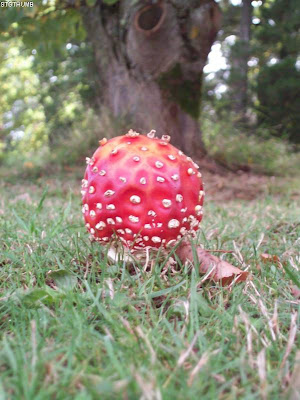 We weren't quite sure what the road was ahead of us whether it was down hill or up hill and busy ... well the road north to was quiet for most of the time but the condition of the road was disgusting, the shire that looks after the roads around Daylesford and Hepburn Springs are either short of money (and should increase the rates paid by people that live there) or they only have a baking rolling pin to flatten out the road ... I tell you it is a cyclists nightmare, it is dangerous and full of humps and bumps that you can't see until you go over them! The side of the road is very messy and sometimes you can have a 10cm drop down to the Lilydale topping, or sometimes there is just nothing there but a deep ditch for you to fall into should you have to get off the road to let the car drivers (that are not very cycle friendly) through. Crikey I am happy to leave that overrated dump of a town called Daylesford and another thing the "so called bike path" between Daylesford and Hepburn springs is nothing but a JOKE!
At Hepburn Springs we turned onto a quiet little road that was busy for a few kms and then the road was ours and once you got into another shire the roads improved remarkably.
Not long after Shepherds flat we past a place famous for the willows made into cricket bats and I didn't see it but Dad and Neil did but this oversized cricket bat in the field. 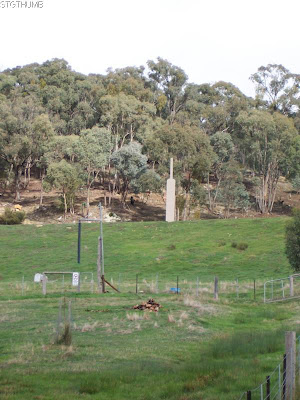 Neil reckoned it was around 6 feet tall!
We took a rest at Franklinford and we were making good time. The road to Franklinford was up and down but with a raging tail wind most of the time the going up the hills was relatively easy, not that it blew us up the hill completely, we still had to change down gears to get up them but I do remember coming to the top of one crest there was an almighty gust that pushed me up and over and down that I didn't have time to change up gears for the down hill part ... I felt like Dorothy in the Wizard of Oz being picked up by a tornado!
From Franklinford we continued through relatively flat country to Newstead, a few little bumps along the way but not that bad and the wind became more of a cross wind that would blow up out into the oncoming traffic so we had to be careful!
We had a lunch stop at Newstead and then headed further north past Welshmans Creek, from here it is a steady climb up to Maldon, I think the hill is around 8km long but again with the wind pushing you we could climb it in at least a gear higher than what we normally would go up hill in!
Now Maldon is a very old little town and I really thought Daylesford would be like Maldon but it is not! It is full of old buildings and has a charming little shopping strip that looks like something out of an old western movie!
Below are some photos of the township: 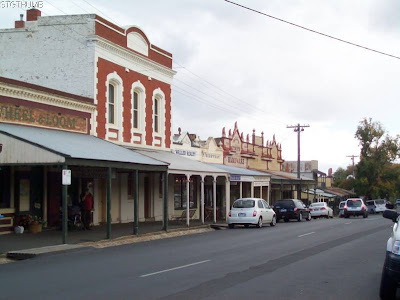 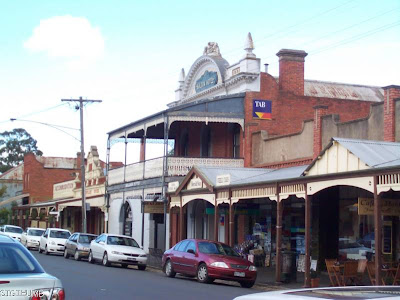 these 2 are of the main street. 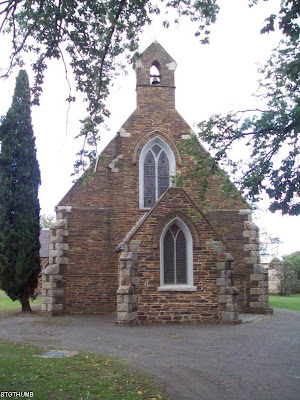 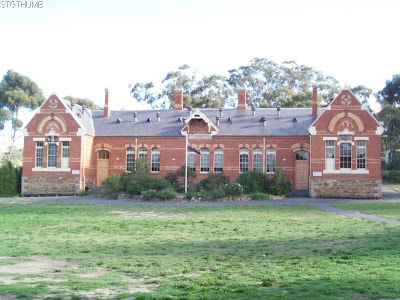 I think this primary school was built around 1834 or 1874 and is still being used today.
Tomorrow we head for Bridgewater on Loddon and we have a tail wind which will suit dad immensely! At least the rain has eased up!
Posted by Janet O'Brien at 6:22 PM