The cyclists day from hell!

Bacchus Marsh to in and around looking for the road! = 30km
Cummulative total = 222km

Well today was not a good day for us ... it started out okay and we all got up early and was away by 8.45am after Neil had a little difficulty getting his trailer back onto his bike and then it falling over as he was putting his front bags on! So it wasn't exactly a great way to start but it happened to him and not dad or I so that is okay!!!!
We knew the ride to Daylesford would be a hilly one and made even more difficult by very strong head winds to Ballan (24km away) but the day just got worst for us ... one thing about Bacchus Marsh is there is only ONE road sign to point you in the direction of other towns and that is in the middle of town, if you are at any other road then toooooo bad! well we are at that point of any other road! We checked Google maps and weren't too phased about finding the connecting road - it was just a continuation of one of the major roads out of town .... well that was wrong to start with, although the map indicated that it was a continuation it actually wasn't so we missed the small street sign that showed us the name of the road (even then we still had the wrong name for it) and so we continued for around 8km down the Balliang - Bacchus Marsh road heading for Geelong - what made us stop was the fact that we were heading towards the You Yangs and not the divide hills! A car stopped to give us directions and when I said we were to follow the railway line he realised what road we were suppose to be on so we had to turn around (with a tail wind at least!) and ride 8km back. When we got to the road it was a different name to what we thought it would be but it was heading in the right direction. So after a break we headed off up this rather steep hill - check out the photos below. 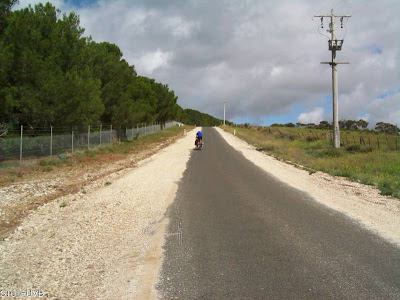 I took this photo of Neil approaching the steepest part of the hill and just before he got off his bike to walk it - I guess it was around 12-13% which is a little too steep for us with loaded bikes and a raging headwind.
Once at the top of the steepest part Neil took a photo of Dad and I walking up the hill - I was walking at around 2.5km per hour that is how hard and steep it was! 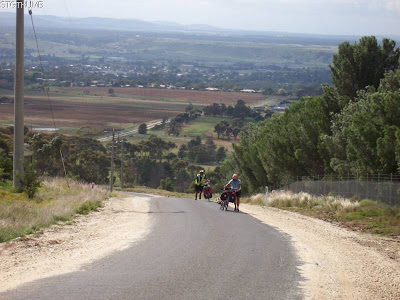 But wait that was not the worst of it ... not only had we done an extra 16km but little did we know that at the top of this hill and a little further on the road becomes unsealed!!! how long it was unsealed we will never know as we had no other choice but to turn around and come back to Bacchus Marsh!
When we saw the unsealed section Dad says he cannot go any further than Ballan but the 2 campgrounds at Ballan do not take dogs so we cannot stay there and will have to continue onto Daylesford and Dad is adamant that he can't go any further, so Neil suggests that we continue to Ballan and get there and ask the caravan parks if they do take dogs and if not do some wild camping, I ask how far is the state forests for wild camping and he doesn't know - so what do we do - one doesn't want to go any further than Ballan, the other wants to try to see if caravan parks will accept dogs and if not continue to find wild camping and here is me not like either suggestions! So I said we will turn around go back to Bacchus Marsh because we will not make any destination with the little time in the day left and the speed we were travelling and I suggested tomorrow we tackle Ballan via the freeway if they let bikes on and go onto Daylesford from there.
So we return here to Bacchus Marsh and revise the itinerary completely so the days are not so long for Dad and we saw that the freeway allowed bikes on. The only downside for Dad is that he has no other choice but to do the long ride (57km) to Daylesford as there is no other alternative but we have revised the itinerary so that the subsequent days are alot shorter. We have also warned him that tomorrow will be like today - headwinds and hills. If he pikes out again we will make it to Ballan and I am sending him home to Bayswater!!!
Until tomorrow hopefully the blog will be from Daylesford!
Posted by Janet O'Brien at 6:30 PM