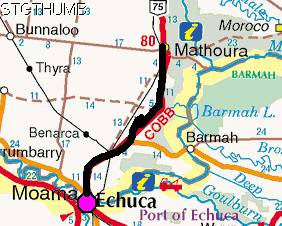 Well it has been quite an eventful few days lately. First listen to this ... dad left early yesterday morning and we did have good intentions of cycling with him to the railway station at 6am in the morning but it began to rain so dad said don't worry stay in bed! We took the dog for a good walk and as we were going back to our tent site one of the men from the caravan park stopped and came up to us and quite rudely said that dogs are not allowed in this area, I just said that but we are camped in this area, then (still rudely said) but dogs are not allowed in this area, too this Neil and I were dumbfounded (as they put us there!) then he asks who put us there and we just said the lady at the reception, and again really rudely he said we would have to move, by now I am ready to strangle the little terd! the only thing holding me back from loosing my temper with him is the fact that there is really no other campground in the area that will take dogs, so Neil asks what can we do. So the little neo nazi man goes off and gets the big boss and they both come back and say that we will have to move to the area that allows dogs.
So we pack up everything and move to the powered area with the other dogs and caravans. Really there was nothing we could do and apparently the receptionist didn't realise that we had a dog, which I thought was stange as I was parked outside with the dog in front of the office and no fewer than 5 mins before the information center had rang them up asking about dogs etc and basically said there are cyclists on the way with a dog so how many cyclists with dogs does this receptionist see each day?!
So it was a crap rest day, no one in the caravan section talks to us except for one couple from south australia, so we spent a nice relaxing day by the murray. 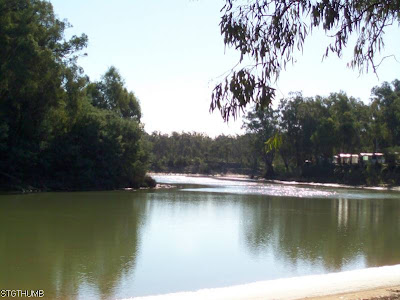 Great view isn't it!
So today we had all the intentions of heading of early but listen to this ... everyone in the caravan section now decides to chat to us!!!!! So we were rather late in getting away this morning.
After much discussion about this caravan park which is part of the Aspen group we decide that it is really 'sterile' and has no character not like the smaller friendlier ones you find in the smaller towns!
So we start out and follow the "long paddock" route which is the Cobb Highway. It is a relatively busy highway but on one of the sides it has about a 50m wide strip to the private land and it is in this strip that drovers can move their stock. Not sure if it is still used nowadays but I sure would love to see it in action. But it is an historic stock route from way back!
We got to Mathoura at lunchtime and just before the information center I come across a Jones Street so we are now 1 all! 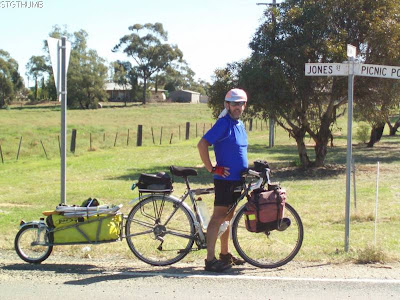 We had lunch at the information center and fill up with water as we were going to bush camp along the Gulpa creek.
Camp 5 said the camping area was 3km along a dirt track. So we head along and find the area but as I was going up the track to the clearing I could hear a rustle to my right and I just thought that it was a lizard but it got louder and was going for a looooooooooooong time and I could see something moving incredibly fast out of the corner of my eye and I thought shit it is a snake and it is heading for a collision for us so I stop behind a huge tree and it stops there (at least I think it did!) and I said to Neil that I think there is a snake behind the tree so we tentatively go on. After assessing the area and ummmmming and ahhhing we decide that the snake has spooked us too much to stay there.
So we take the chance that the caravan park takes dogs and go back to Mathoura ... and yes the caravan park did take the dog, in fact I don't think it sees too many tenters as it is a small one with permanent holiday caravans! But it is quiet and small.
So we will pass through Deniliquin tomorrow and onto Conargo!
Below is a picture of me coming back along the Gulpa Creek Road. Rough in places but ridable! 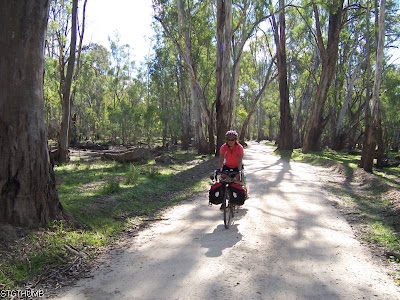