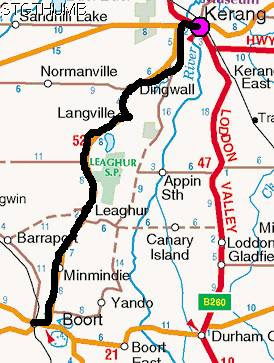 Last night despite thinking the campground was overpriced we did have a nice setting and I managed to take a photo of it around sunset. 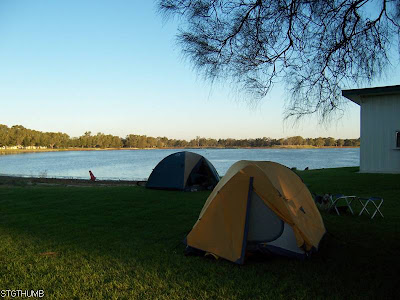 At this point the view was lovely but the temperature was starting to get cold, enough to have to put pants and the merino and polar fleece vest on!
For dinner last night we had steak sandwiches (and the steak was a little tough to bite into!) as we don't seem to eat enough red meat - generally veges or chicken! Dad decided to boil himself some eggs, so here is a photo of him doing 2 things at once! 1. boiling his eggs and 2. patting Kouta and giving hime some attention! 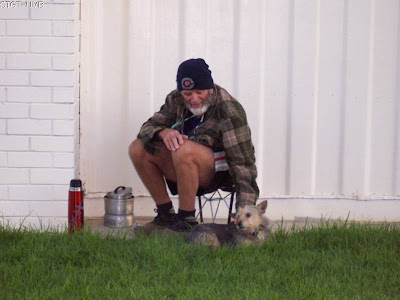 I know what Kouta is thinking while this photo is being taken 'Oh I hope phil gives me an egg' but that was wishful thinking Kouta!
Todays ride to Kerang was flat but a little tougher, we had a slight cross to head wind but that was no real drama and cruised along at around 16km per hour (instead of out 20km per hour with a tail wind!!!) The country side is still flat and I think it will be like that from now on and as we got closer to Kerang the fields were more lush that 100km south. But one thing we did have to battle with today and that was swarms of locusts. We had seen cars and trucks that have them splattered all over the front but for us they just get a head ache when they bang into us.
Generally they were in groups and some where actually quite thick in places. I couldn't figure out why they always were going from a left to right (and never from right to left).
We took regular breaks today for dad as he doesn't like head winds and to break the journey up we would stop every 14km or so. 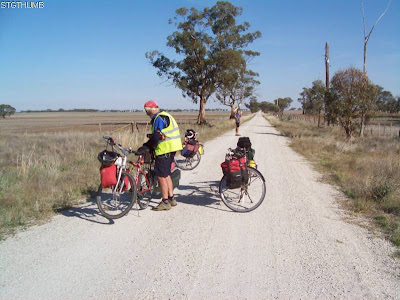 Our first rest stop we had to park in the middle of the dirt road as this area and alot further a head is 3 thorn jack country and I do not want these in my tyres so to play it safe I try not to take the bike of the roads!
Our lunch break was at Lake Merang and we stopped at the telstra exchange like we normally do and Neil was over taking a photo of us and he came across this letter box and thought the concept of "no junk mail" on someones letterbox out in the middle of nowhere was really strange. It is not like there would be an abundunce of coles, woolworths, kmarts, reject shop etc way out here to even warrant brochures! But is was still funny that someone had put it on their letter box. 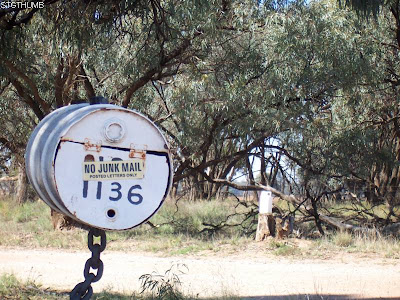 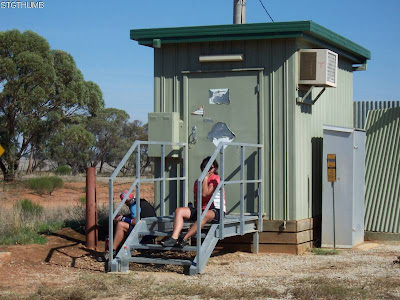 As you can tell it is a lovely warm day and with this north easterly wind came warmer temperatures - I think around 24 degrees which is fabulous to ride in! 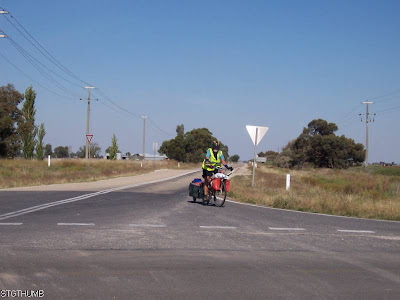 I think Dad at this point was happy to see the turn off road to Kerang! Only 2 more kms to go!
I haven't been into town but Neil says there is a woolworths so it must be a reasonable sized town to have one of those.
The campground is okay and has a small camp kitchen and rec/tv area with tables so at least that is better than last night. There is a big camping area which Kouta can run around in.
Tomorrow is a nice short day to Koondrook/Barham so Dad can get his first look at the Murray (at least I think it is his first real look at it) and we will stay there as a rest day. And I think the northerlies are with us for the next few days but somehow I don't think it is hot enough to go for a swim in the Murray!
Posted by Janet O'Brien at 3:54 PM