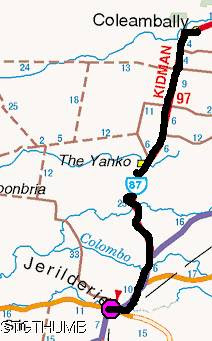 Jerilderie to Coleambally = 71km
Cummulative total = 898km
I sure am glad today is over ... I thought the end of the 70km would never come! We woke nice and early this morning and the legs were a little stiff after yesterday but once we got cycling it wasn't all that bad. We had to travel the first 15km along the Newell highway which didn't really have that much traffic but the road surface itself was very bumpy and large pieces of gravel was used to reseal the road instead of small pieces of gravel which makes the road a little smoother for us to ride on. So we were both happy to turnoff onto the Kidman highway. Neil says this highway (Kidman) was named after the famous actress Nicole Kidman ... at least that is what he tried to tell me, but does he think after 13 years that I don't know when he is "bull crapping"!!!
He wanted to take a photo of the 2 types of surfaces on the roads that we have been encountering. 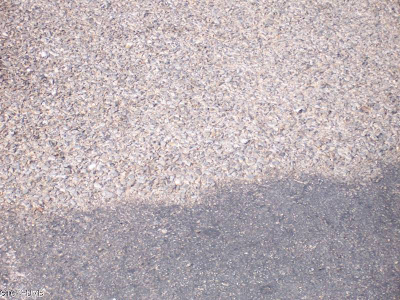 The top part of the photo has the large chunky gravel embedded in tar and the old part of the road has the smaller gravel embedded in tar which is alot nicer to ride on.
By 30km my legs began to feel heavy from yesterdays ride and I thought that I might not make it to Coleambally! But at 40km we had our cuppa break and a bite to eat and unfortunately there are not too many rest areas on this kidman highway so we have to make do with any driveway we can find and for lunch today we had to stop off at a sort of stock yard. And that meant lots of flies! 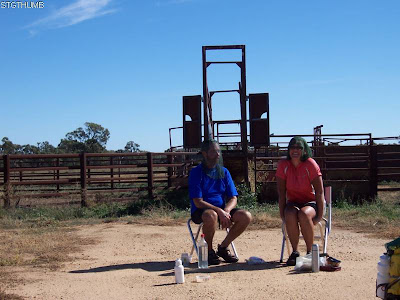 Doesn't Neil look scary with his fly net on!
After lunch the legs felt a little better after a rest. Basically the road is flat and has long straight stretches. In fact before lunch it was alot of "big sky" country which is best described as when you look straight ahead there is 3/4's of your vision is taken up by sky and the rest is the land and the trees in the distant. After lunch the trees are alot closer to you and you will find you only see 1/4 of the sky ... bizarre really as I never really thought about it that way and it was only when neil said "big sky" country that I began to think about it ... since there was nothing else to do during the 70km!
We did see quite a few hawks (we think they are) circling at one point in fact all 5 were sitting on the fence close together and when Neil stopped to take the photo they flew off and started to hunt and circle. 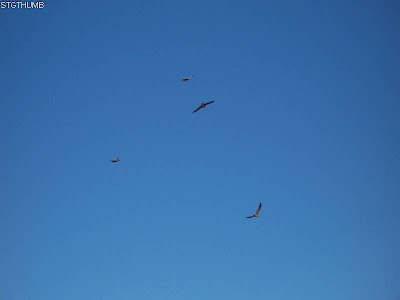 Neil managed to get 4 in the photo!
Not long after lunch at around 30km south of Coleambally we started to encounter rice fields! yes they grow rice up here. We did see a "sunrise" brand bill board and then we started to see the fields and I suppose they are dry grown and not wet grown like they would be in China! 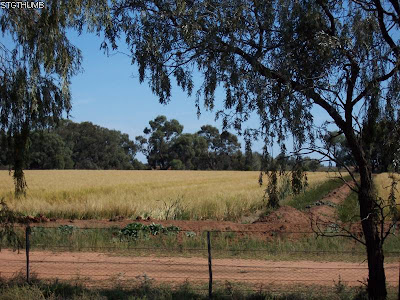 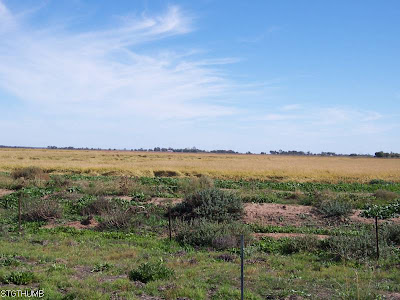 Some of the fields are huge and are at various stages of growing. Since it was a public holiday today there was no one in the fields cutting although we did see the machines in the fields but they weren't working.
So it was a long ride to get to Coleambally and it was a relief when we saw the town sign. 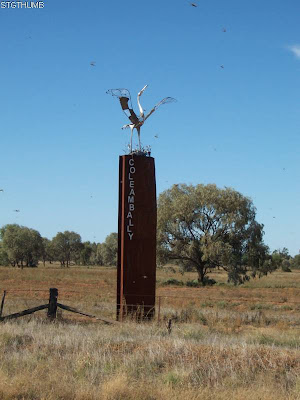 Just before we got into town we started to see vineyards but we don't think they are grapes grown for wine as we saw no place for making or storing so we assume they are table grapes and the sheds are for packing. We got to Coleambally around 2pm and while setting up the tent we began to listen to the Geelong vs Carlton game and unfortunately we did not do too well and lost!
For dinner tonight we decided to get takeaways as everything was closed by the time we got here as Coleambally is a small town with a popn of 658 people. We are staying here tomorrow and will rest our weary legs. We have covered 160km in 2 days!
the campground is small and quiet. And kouta has plenty of room to move.
Posted by Janet O'Brien at 5:52 PM