It has been a long hot day today and I am a little late in putting this up but we arrived here late afternoon, had to have an early dinner and then watch Geelong loose to Gold Coast Suns this evening and now I am about to tell you about a fantastic snake show put on in last nights caravan park.
Here is a picture of the owner of the caravan park we stayed at last night in Mt Surprise and his name is Russell ... 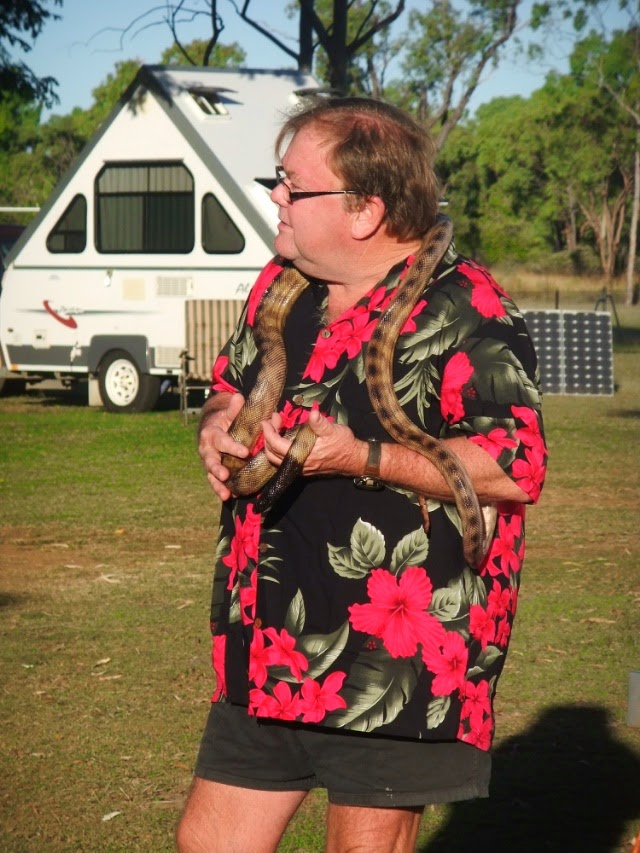 and his friend that is wrapped around him is called Clancey and he is a black headed python ... not a venomous snake but a python that constricts.  It is about 3m long and is 19 years old and is friendly and is use to everyone handling him ... Leanne you will love the following photos! 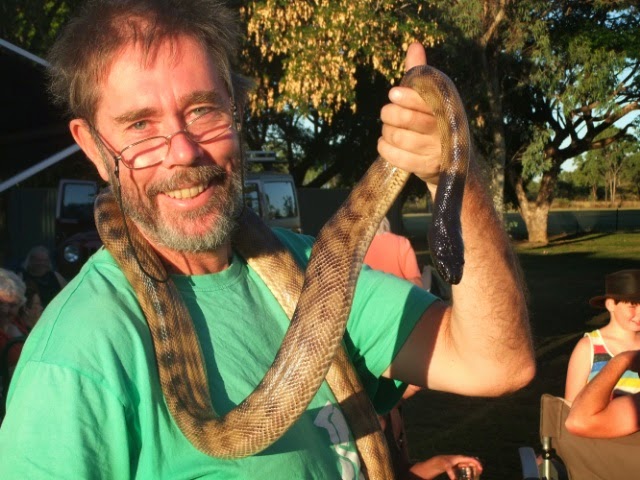 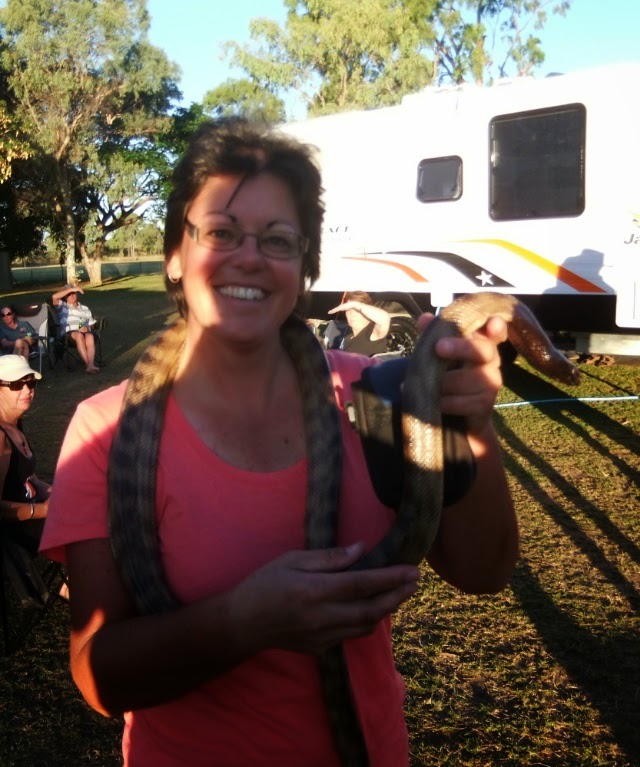 It was such an informative show especially angled at first aid to be given when bitten so Neil and I feel a bit more confident if we do get bitten in the middle of no where!
Now have you ever wondered what snake poo looks like? while Russell was chatting away right in front of me I saw the snake urinate so I informed him and he immediately put him on the ground and Clancey proceeded to do a poo and I tell you everyone was fascinated watching the snake do his business and all the oooohing and ahhhhhhing it was hilarious but  the end result shocked us all!  look  at these photos of Clancey pooing ... 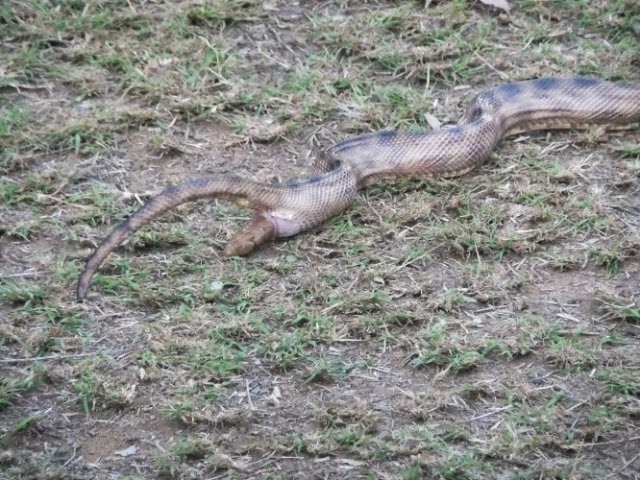 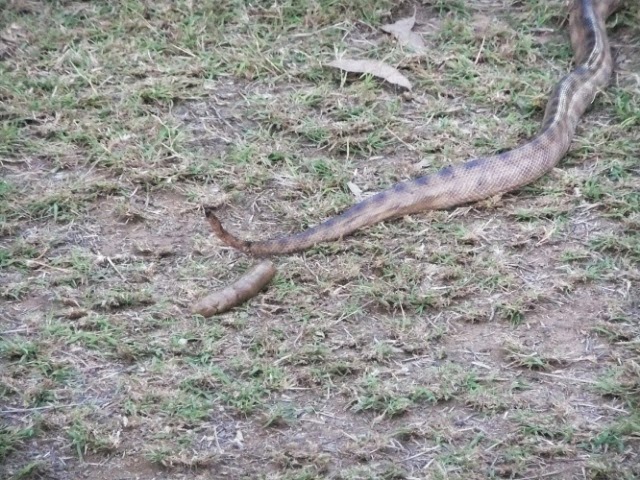 can you believe what it looks like ... a dog poo! we were all shocked that it resembled dog poo that for all we know when we see one now it may just be a snake poo rather than a dog poo and guess who gets to pick it up? 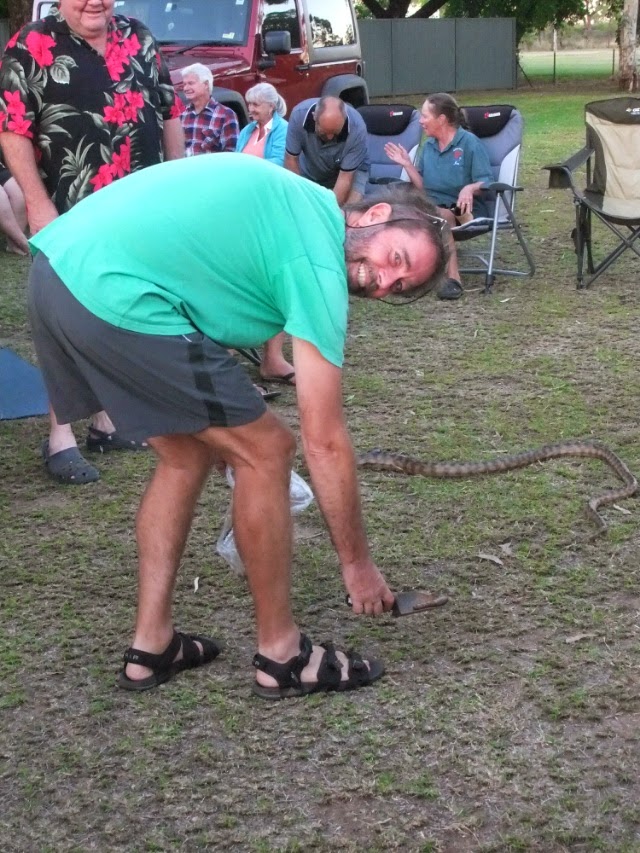 yep Neil because we had Kouta with us and he went of and did his poo so Neil picked that up and Russell asked him to pick up Clanceys' poo as well!!!
It was such a fantastic show and we really enjoyed it.
so this morning we left at our usual time knowing we had a big day ahead.
Just out of town we come across the O'Briens creek road and gemfield sign so we had to take a photo! 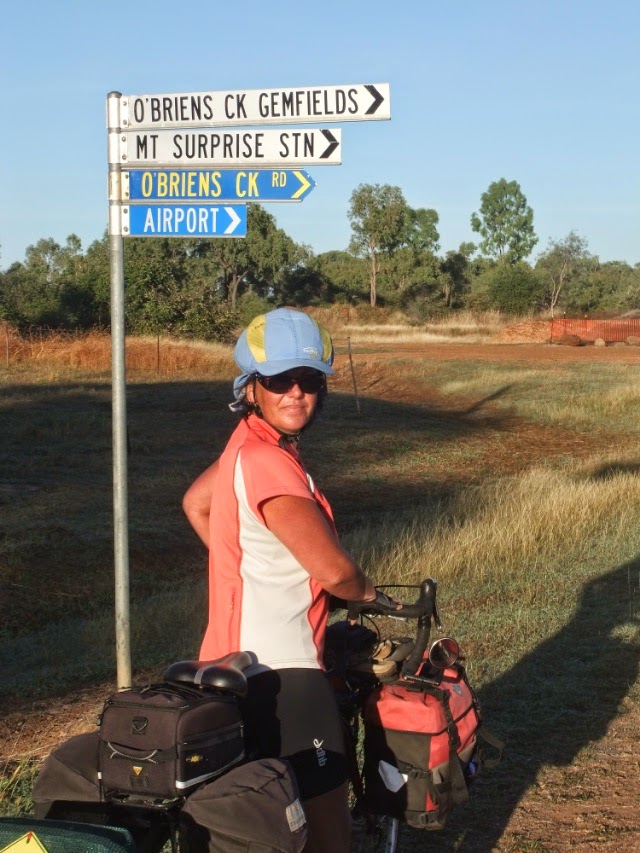 believe it or not but the O'Briens creek is a further 80km away and yet this sign was a few kms out of town.
Also further down the road we came across some Brahmas grazing on the side of the road, this was a common occurence all day and I think for future days riding as well ... you can call this photo 'running of the Brahmas'!!! 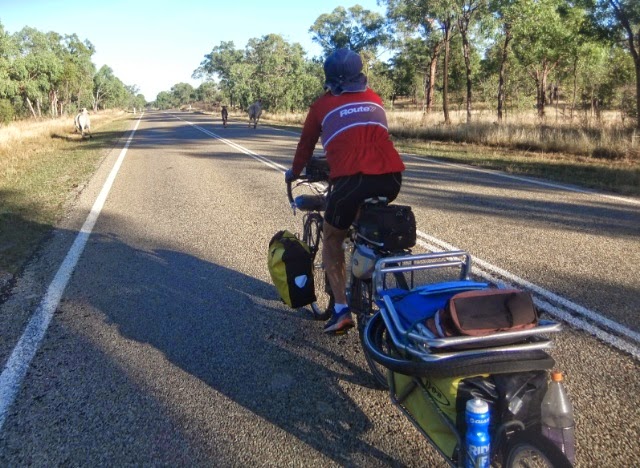 Overall the day is rolling with not steep hills but manageable ones and both our legs felt good even at the end of the day.  The first 20km is fine and is a lane both ways and then from 20 to 45km we encounter alot of single lane roads which can only fit one car on at a time ... 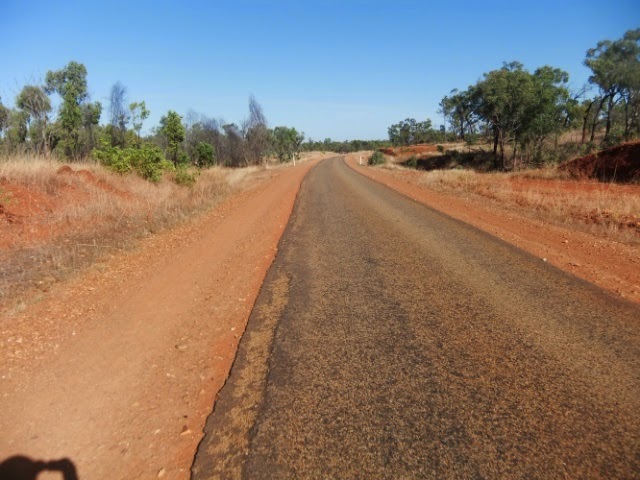 the general rule is when you meet another car you both have half on and half off and logically slow down.  There is a general consensus that caravaners don't like to get off the road (why they bother taking this road knowing it has alot of this single lane road I don't know!) but most were really good today, we only had 2 trucks that we had to get of the road for and only 1 caravan that didn't want to get half of the road until I indicated that you haven't given us enough room (mind you he was coming at us at about 80km per hour that is why I indicated with my arms that there is no room for us and you going at that speed!) he did at the last minute slow and move off the road!
Otherwise if you didn't have the narrow single lane you had a nice 2 lane road which has been recently resealed or made into a 2 lane road - generally where there is a crest or hill they have made the road into a 2 lane road ... this is the road going up the range ... 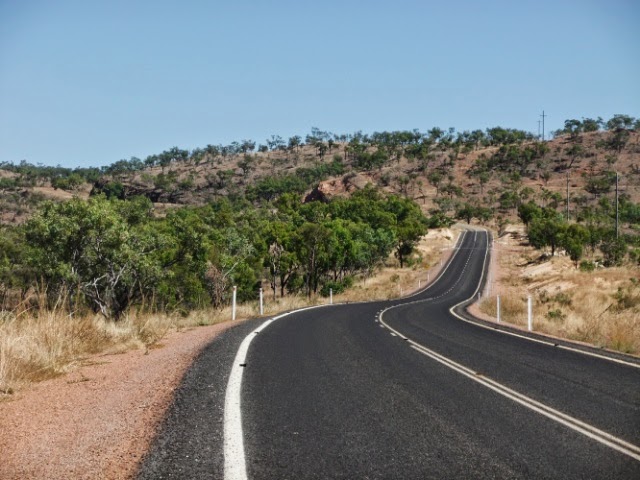 There was no real wind today so we had to cycle it all rather than have the luxury of a tailwind hence why it is so hot today ... around 29 degrees.
One thing there is alot of are termite mounds they are everywhere ... 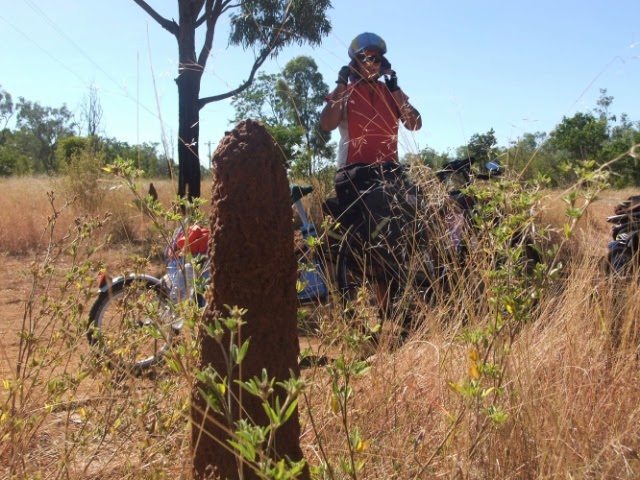 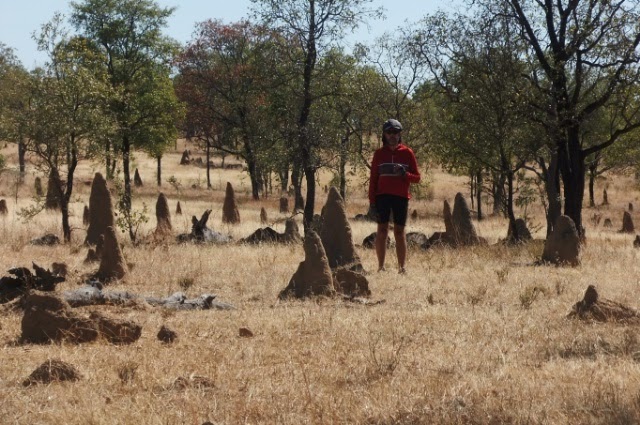 most are probably uninhabited and quite a few are broke ... here is what one looks like on the inside ... 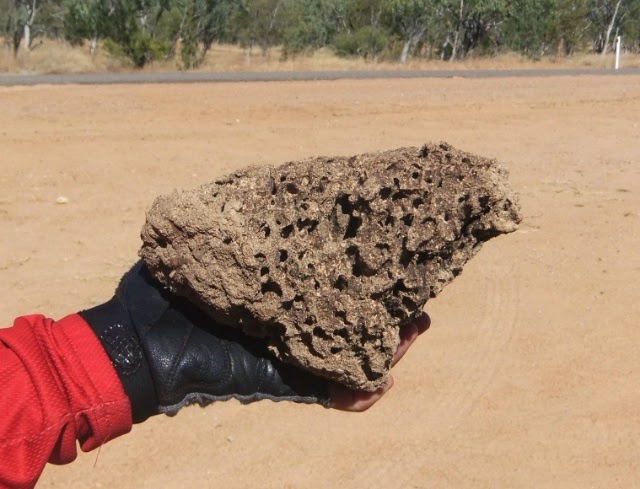 The traffic today is very light and when it did come they all tended to come at the same time.  so there was alot of the days ride where it was just Neil and I.  Also, Neil noted, that quite a few people took photos of us! we normally get that in caravan parks but today Neil said everyone had there tablets and ipads up against the front windscreen taking photos of us!
You remember the O'Briens creed road sign well here is the O'Briens creek itself ... 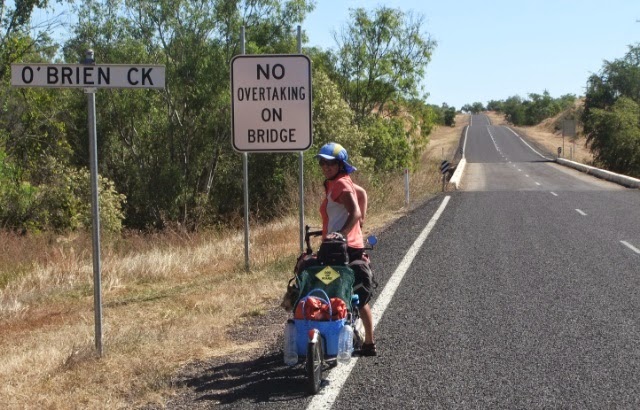 off course like a lot of creeks and rivers it is a dry as a bone! 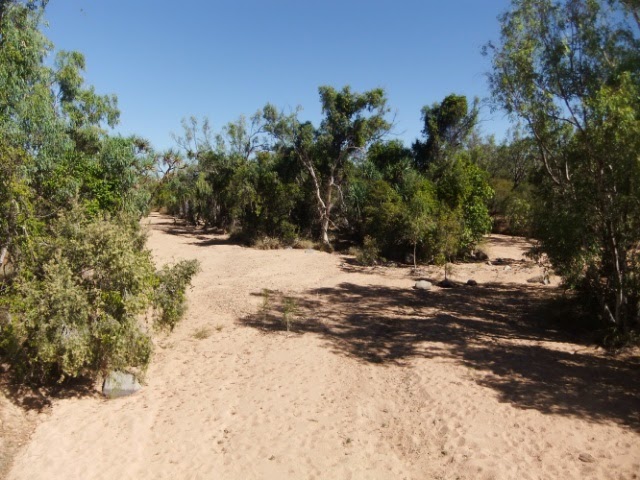 We crossed this creek about 10km before Georgetown.  We get to Georgetown about 2.30pm and we got food at the friendly grocer which is also the Ampol service station .. the prices are quite reasonable considering we are in the outback.
The caravan park is nice and shady, not many powered sites but heaps of room for unpowered ... we are amongst the shady trees and will have shade for a fair bit of our rest day tomorrow. 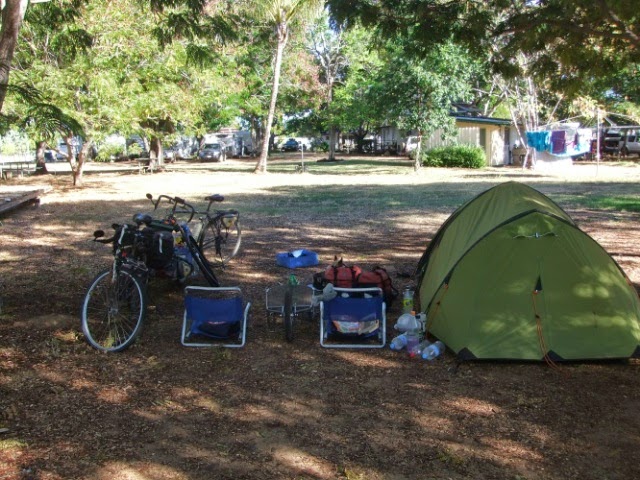 Quite a few caravans and campers have had to go unpowered as there is only about 20 powered sites and they are all full.
It is a nice basic park but a good one for outback standards.  We have a small kitchen with fridge, bbq, jug and toaster ... everything we need! Tomorrow we may go for a dip in the local pool as it is free as we are staying at this caravan park.
One thing we have noticed is that we get telstra internet reception well at the small towns we pass - Mt Surprise, Georgetown and more than likely Croydon and Normanton but we don't get mobile phone reception only because we have an Aldi sim ... if we had telstra sim for the mobile phone we would be able to use the mobile phone but I think I prefer to go without the mobile phone than go without the internet reception! So for those that are interested ...
Monday - bush camp at Gilbert River (no blog)
Tuesday - Croydon (there will be a blog then)
Wednesday - bush camp somewhere (no blog)
Thursday - Normanton - there will be a blog!
Posted by Janet O'Brien at 8:13 PM