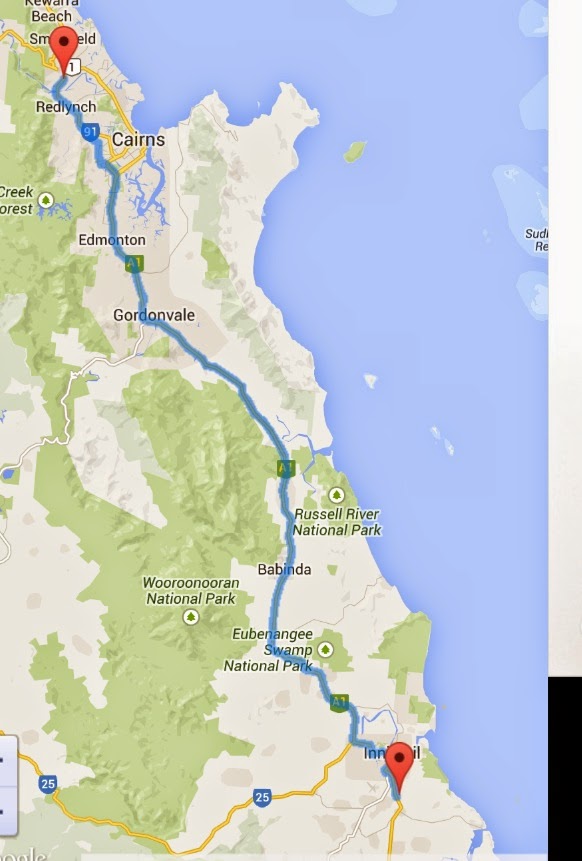 It was still raining lightly this morning but we managed to pack up and head off.  Fortunately the clouds were breaking up all around us so that was a positive to todays long ride. I forgot to mention yesterday that the owners of this caravan park at Innisfail have only been here for a month ... guess where they come from ... you won't beleive it and think like us that they are crazy ... they came from the hottest place  in Victorial ... Ouyen and they have come to one of the wettest places in Queensland!  crazy aye!  What rain Innisfail gets in one day is what Ouyen gets in a year!!!
It was easy getting through the town of Innisfail as it was early and no traffic about.  However that was not the case for the rest of the day along the Bruce highway.  Being a Saturday we knew it was going to be a busy day.  We had a shoulder for most of the day and even when we had to go through a few undulations the shoulder was relatively good.
Not alot to photograph except sugar cane fields and banana plantations which both are soaking wet - especially the banana fields you can see the tractor ruts are all full of water.
Just after Babinda you come around the corner of a mountain and there on the left is this stunning garden ... unfortunately I left it too late to stop and photograph it so these photos don't do it justice ... 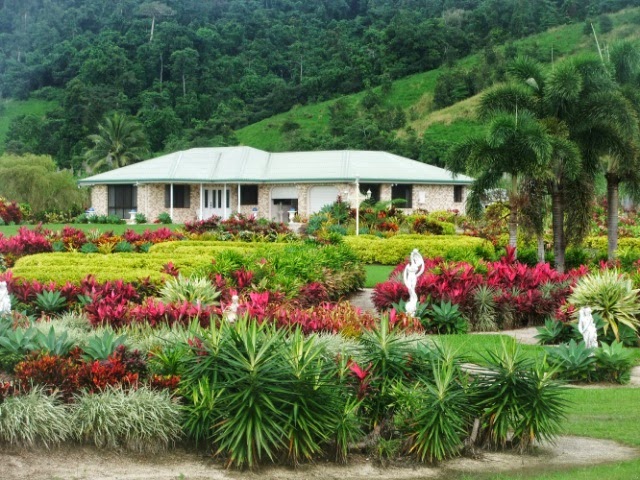 the colours of green and pink/purple are just stunning.  someone clearly loves gardening ... I didn't get to photograph them but the garden is called Serenity Garden and has a few park benches with manequins on them ... fully dressed! (they didn't have their raincoats on thou!)
Today is exceptionally hot ... around 27 degrees with 100% humidity!  I am not joking we were both covered in sweat and it felt like we were wearing clothes that were wet from the rain but really it was our sweat.  I must admit that after doing 100km that it is much easier to do on a high humidity day at 27 degrees compared to a stinking hot dry day of 30 degrees!
We did stop at the corner of a sugar can field and since we are surrounded by mountains (both sides sometimes) that I had to take a photo of them.  You can never see the tops of them even for the 2 highest peaks in Queensland ... Frere Bartle and Bellenden Ker 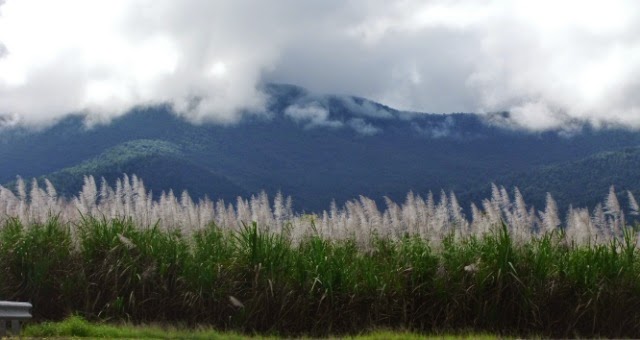 here is me with Neils bandana as a headband to stop the sweat from getting in my eyes ... 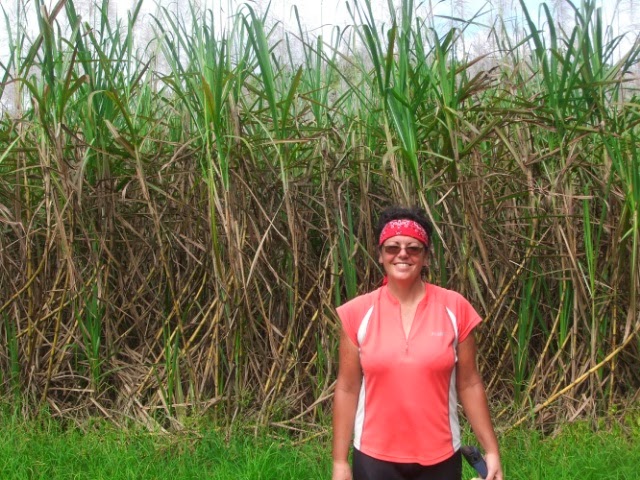 So we are making good time as there is a little tailwind but not alot and with the odd undulation every now and then, it is relatively flat.  We pass where we were going to stay at Gordonvale rest area and we see that they have fenced a huge part of it, we could get to the field with our tent but not caravans.
Just 10km up the road is Edmonton and we stopped to get supplies as we don't know where the major shopping centers are.  While I shop Neil looks up to see where we go ... we do know that the campground is at the northern side of Cairns ... a further 24km to go.
We ride the Bruce highway for a while as it has a great cycle lane, we then take the west arterial road to Redlynch.  This is a good road as it has a bike lane, at times it gets a bit dogdgy as you can be riding between 2 lanes - one going straight while the other is turning left, but it is okay.  There is alot of traffic but we have no problems.  At the 90km mark we start to climb and I thought crikey as remember I don't have gears at the front so I have to use high gearing to get up the hills.  But at least there is a down hill!  Finally we get here around 4pm.  We both stink of sweat and wet clothes and are covered in road crap.
We set up tent, have a long hot shower, have dinner, do the clothes washing and now we are in the tent where it is stinking hot in here.  There is no breeze but at least there is no rain, fingers crossed we have a good days sunshine tomorrow!
Posted by Janet O'Brien at 7:26 PM